Sure, I guess I’m just asking what the purpose of worrying/complaining about it is, when you have the ability to take action on it (directly in this case via PR)

Which requires me to create a burner github account for that purpose. I don’t use github )

But you do you

I thought it was important to highlight this issue, it was something that I found when I was looking through their repo that stuck out. Thought I was seeing things tbh and hoped somebody would set me right that they did follow the license and show me it in the repo.

Gotcha, apologies then, the original posts came off more as complaining/shaming to me, but sounds like that was my mistake. Again I’m not a licensing lawyer but I can try to take some time to look at the original repos later and see if anything sticks out to me about the licensing.

thats their schtick… whine and complain about things (like having to be omega to set up a 3rd party dev account, but can be alpha after the fact.) or wanting win10 users to be treated like linux.

So wuts the verdict on Wine 7 for gaming, Eve for example?

I am only testing the environment and apps not games in a VM.

Not worth it for Evemon, it’s dead, but, for Eve?

Eve has been running fine for me on the Wine 7 RC’s (I still haven’t upgraded to the stable build). Note that I use wine-staging rather than vanilla, with the latest DXVK.

I’m not sure unfortunately–I use Arch (btw

). Hopefully someone else here uses the deb package and can help out. If not, there is also the winehq channel in IRC

It’s not an issue really as I can either make the sym links myself, or just update the PATH but, would be nice if there was a package that had some easy way to keep em updated without me having to create it.

As it stands, out of the box, the wine-stable .deb won’t work without post install steps to let it know where it is in /opt, this may throw a new user a twist.

I tested it in a clean distro install in a VM, and 6.0.2 worked fine out of the box, but 7.0.0 did not because the system was unaware it was in /opt and pretty much the commands are not found, meaning things won’t launch without “knowledge” and effort.

Edit: this is because i used wine-stable rather than winehq-stable.

ran the installer to install it and got this 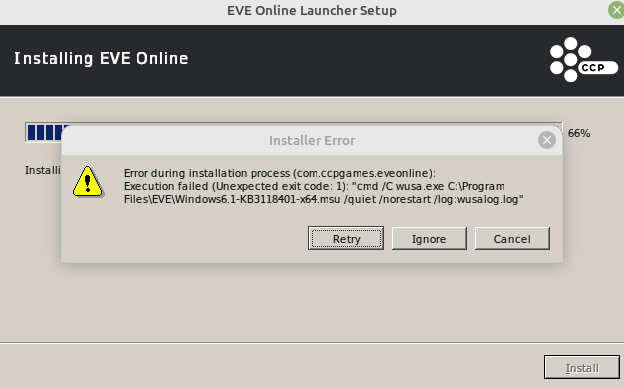 The prefix was defaulting to Windows 7 compatibility.

When I changed it to Windows 10 it worked.

I also had to set the prefix back to Windows 7 compatibility in order for the launcher to work.

Custom compiled wine 7 stable in Fedora. It works nicely. I can feel that graphics are smoother than the 7 RCs. I use the windows launcher, updated to the latest version.

Proton is getting more isolated and contained, with Valve now adding DRM into it for Steam Deck and publishers acceptence, bwrap, Linux kernel namespace isolation, DRM modules (BattlEye etc). Proton is a walled garden that is typical of Valve and Apple et al.

Hopefully they will port all the libraries to PE format soon for Wine on 64 via thunking so we can finally have the :i386 packages removed, it would greatly reduce the size of the package deploying.

As long as we have GE we are fine.

Then I strongly suggest you keep a local copy of the repository. Remote repositories can disappear any time.

I do have one issue and Eve client and multi-head and it not liking the combination of XRandR extensions and NV. Wine 7 apparently has “new and improved” multi-head support.

It seems to default back to 1.0 even though I have much later versions.

My eve client always resets my monitor structure and reactivates my disabled display resets it to primary when opened at full screen.

I have to do this every new desktop session.

I don’t feel competent to maintain any of that, if it disappears I’m at the mercy of other people to continue the job.

But yeah, I think I understood your point, github is not the most trustful ‘repo center’. But I also don’t think GE will have a breakdown like our npm ‘friend’.

And also, let’s not start a offtopic in here, let it rest. Let’s keep the focus on wine 7 and it’s variants. I’m just pointing that the GE version is so good it makes proton almost useless, and even if you need proton, you can use his proton. I bet his proton will circumvent the steam, and after understanding your point, we need to first check the license to see if Valve can take any action, I don’t have that info rn.

Redistribution and use of Proton in source and binary forms is governed
by a variety of licenses.

Refer to the contents of LICENCE.proton for the license for the top
level contents of the Proton project.

Proton uses a variety of other software, each of which is governed
by its own license. Those licenses are contained in a file named
LICENSE or COPYING in each directory.

I gonna go with frack, it has a chance of ending bad.

Anyway, I use wine-lutris-ge most of the time. Which is bound to wine license. Ofc he can wake up one day and erase it, but like I stated before, I don’t feel I can do a better job, so no point forking it.