The Sons of Luminaire are a European timezone

, low-sec, and small-gang PVP corporation engaged in privateering, piracy, buccaneering, freebooting, raiding, robbing, pillaging and as much murder, thievery and destruction as possible in Black Rise and surrounding regions. We are proud members of the Gallente Federation militia in faction warfare.

Our founding members are a group of players who grew tired of the null blocs and their obsession with FATs, PAPs, CTAs, mining, ratting, and blob warfare. Instead, we made our own corp with two purposes:

We rely on our (questionable) individual piloting skill in PVP rather than blobbing the ■■■■ out of everybody to be successful. Anchoring is a dirty word here, the smaller ships in EVE are our preference - frigates, assault frigates, command destroyers, cruisers of all kinds and battlecruisers. This means our fleets are often mixed comps of varied, interesting ships rather than the same old same old. We aren’t limited to low-sec either, and occasionally raid NPC and sov null if the fights are there.

If you’re looking to be a valued individual and develop your PVP in a casual, chilled out environment, and don’t want to just be a nameless cog in somebody else’s machine, read on.

You can find out more about us on our webpage, check out our killboard, or join our Discord!

Take our quiz to see if we’re right for you. Go on, you know you want to.

To Join (or just find out more):

Join our Discord and speak to a Recruiter directly (type @Recruiter in public-chat to get their attention).

You can also join our in-game channel, Sons Public, though you’re more likely to get a quick response on Discord. 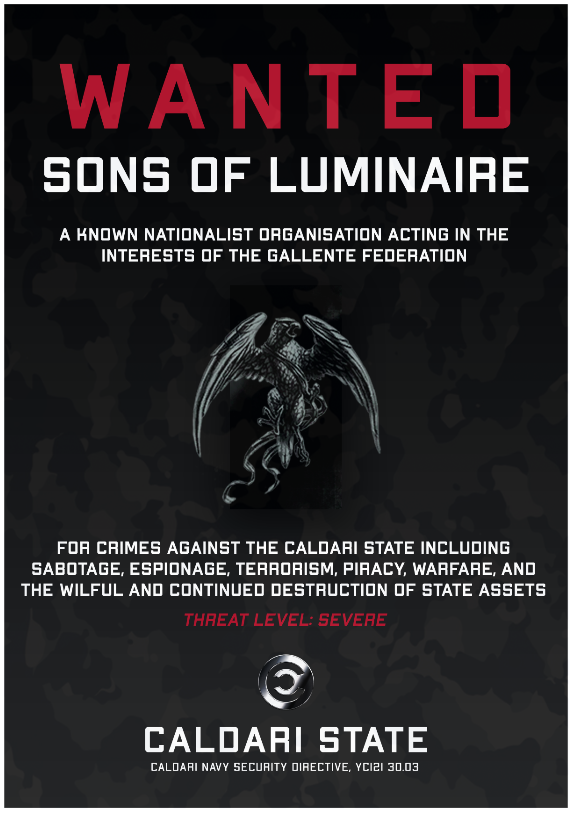 Good to see new faction warfare groups popping up, hopefully you eventually support alphas and bring more of the new players in lowsec

Saucy and friends have been in FEDUP indeed. I wish them all good luck and lots of fun back in lolsex.
If whoever reads this is intrested in a relaxed smallgang focus lowsec group definitly should check Sons of Luminare out.
I have flown with everyone in that corp for quite some time now. They are not the most elite tryhard dudes, but definitly no scrubs either. Everyone loves good fights. PvP has always been the main intrest of everyone and they are all outstanding relaxed and chilled. No one in that corp i’m aware of is a frkn drama queen. So if you are looking for a new group of friends, this could be your new home.
Hope they find the content they desire and deserve and they can keep it up!

Had a good roam Friday. Had a better one Saturday - took a long stroll through low-sec and then into NPC null, where we killed this bad boy https://zkillboard.com/kill/76087114/ and smashed a few gatecamps on the way through.

Sunday? We went 6 v 25 against Calmil who were doing an ihub bash in Oto. We stalled them for around 2-3 hours and killed over half of their fleet (and the odd third party) before they left quietly left without finishing the ihub… https://zkillboard.com/related/30002808/201904072000/

Loads of fun to be had! Join today.

Exciting to see a new GalMil banner flying in the warzone!

Best of luck on hitting the ground running. Your USTZ GalMil brethren welcome you with open arms!

Thanks for the kind words guys!

Did a public fleet last night. Lost a load of T1 frigates to a big Caldari blob- came back with Rapid Lights, because we’re horrible like that, and killed them instead. We were joined by some friendly guys from GMVA.

Lots of interest from potential recruits, too, with two confirmed and one more in the pipeline.

We’re growing, we’re active, and we love PVP. What are you waiting for?

Check out the Sons of Luminaire community on Discord - hang out with 34 other members and enjoy free voice and text chat.

Bit of a no-EVE night tonight, but we’ve taken on two more people! Still looking for more. There’s a weekend of PVP ahead.

Had four fleets this week since Monday. In particular, we joined our USTZ brethren in GMVA (who have been very welcoming) in blowing up some Caldari structures, which involved at least one rather fun fleet engagement…

Fly for the Federation. Woo!

160 more kills since Monday. Looking for PVPers to…

Our boy Graldan has been doing a good job frustrating the Caldari.

It’s BBQ weather, so we’re having a night off. We are still recruiting, though!