A new type of **real** Carrier

I had an idea about carriers, but not the carriers as they are implemented in the game currently.

So, currently there is no real carrier in the game, imho, but only oversized drone carriers ( fighters ). The name carrier applies to some extend, but when I think about a carrier I imagine it more a carrier carrying ships & pilots, not drones.

The base design I would use would be the Orca. It has the flat design that comes close to what I imagine a carrier in EVE to be.

Now, instead of the 6 ore containers that it has, imagine it having 6 platforms that can actually dock player piloted ships.
How many ships ? you might ask and I think that it should be based on modules in either the rigslot ( 3 Slots ) or the highslot ( 6 Slots )
Imagine that, based on the module type a edit module slot could hold 4 frigate class ships or 2 cruiser class ships or 2 BattleCruiser class ships.
Combined that would be ( when based on rigs ) 12 Frigs or 6 Cruiser or 6 BattleCruiser or ( when based on slots ) 24 Frigates, 12 Cruiser or 12 BattleCruiser.
This is a base idea … it could be Cruiser, BattleCruiser and Battleship or another sequence of three types. Combine as you wish.

I image the docking being done on a flat platform using both sides of it ( up / down ) and held in place with some sort of either tractor beam or clamps.
I would prefer the tractor beam, since we’re in the far future.

While a ship is docked the pilot can do two things: Nothing and enjoy the ride or undock. Should he log the ship simply falls off as the tractor beam releases.
The other idea I had is that whilst docked, the pilot does not show in Local chat but only on a shipwide channel. I believe that would mix up things a little bit because currently you always have a good clue who’s coming to ruin your day. By not showing in local until the pilot or the carrier actually undocks said vessel … it’s anyones guessing game what they bring and how many.

The carrier should be jump capable but it should also rely on others to protect it. Should the carrier get blown up with ships still docked it should be decided by the roll of a dice if the ship escapes and/or how damaged it gets away or not at all.

The carrier, if neut’d to 0, will automatically release all tractor beams … if the pilots are ready or not. It could have a PANIC module, but once again, triggering that … tractor beams release the vessels docked.

I do not see much in terms of game mechanic that would be required to actually implement it. 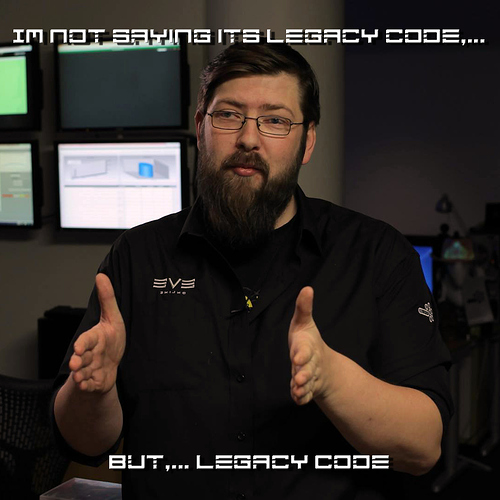 Sorry for being blunt …

The point is that this isn’t going to be possible without a major rewriting of the gamecode. Something CCP is unlikely to do to accommodate this idea. Specifically because it doesn’t make any sense and doesn’t provide any worthwhile gameplay.

Hm … do you have access to the codebase or intimate knowledge about it ?
I rather wait for somebody with “CCP” in front of their name to state that, same for the assumption that they will not do it.

As to the making sense, that is your personal opinion and highly welcome, albeit you’re only out of thousands of players.

Thanks for your input !

Nobody at CCP will tell you that. They’ll maybe read your idea and then close the thread because it simply doesn’t make any sense whatsoever implementing this.

And I don’t need access to the codebase. Being a software engineer myself, I know how it works. I guess you expect them to just swing a magic wand and it works after a few man-hours, but that’s simply not how software engineering works.

But if you really want to go there, what does your idea add in actual gameplay short of facilitating AFK gameplay (that CCP is removing plenty of)? Why should this ever be implemented in the game short of “I think it would be cool”?

If you’d take a step back and think it through and then think about how this could ever fit into EVE, you’d have never posted that idea in the first place.

Well … I still do not think that I will take your word for it, about nobody saying that it will not be implemented and for them not finding it making any sense.

You being a software engineer and being able to evaluate correctly what it takes or doesn’t without looking at the codebase ? I will not comment on that.
I am a Software Engineer/Architect for the last 30 years and let me tell you, without looking at the codebase you simply cannot presume or assume what it takes to implement a feature or not. So … step off your self-erected pedestal in that regard.

If you think that my idea fosters AFK gameplay, read until the end. I guess then you’ll see that if the pilots being transported go AFK all sorts of things can happen to them. I guess you missed that.

I have actually taken a few steps back and looked at the idea from various points of view and I still think that it would enrich the gameplay.

“real” as in other people being carried around.

A RL carrier has a multitude of types and classes of vessels it can launch/deploy, I just used terms known to players.

You just called the entirety of the docking in stations mechanics dumb.

Okay, I guess you have a bigger beef with the game than just replying to my idea.
You should make your own thread on that and stay out of this.

I do not see any criticism ( constructive or otherwise ) in your replies.

Unless you have not noticed, we’re flying spaceships in this game from inside a goo filled pod and have our brain uploaded into a new body upon death.
Let’s not argue what is possible in a/this game or not.

As I already explained to you, I used the RL carrier as a reference …

Like it ? Okay
Don’t ? Okay
Want to discuss the actual idea ? Okay
Want to troll ? I end my replies to you here, unless you actually have criticism to contribute

[quote=“JC_Mieyli, post:15, topic:9438, full:false”]you chose to ignore it because its not ccp reply which you think you deserve
[/quote]
I do not think that I deserve a reply from CCP, I just believe that nobody else has a grasp about what it would take to implement it.
Discussing the idea and ramifications is fine, pretending to know what CCP would/could answer and thinks of the idea, is not.

My post stated that you can either stick with the carrier and enjoy the ride or undock from the carrier at the moment you want to. I think that we’re beyond 2002 and that CCP is able to freeze the controls until you undock and that they are also able to focus the camera ( fixed with rotation, zoom enabled ) on the carrier vessel while being transported.

See above, no point.

Your opinion about my idea was duly noted.

I am a Software Engineer/Architect for the last 30 years and let me tell you, without looking at the codebase you simply cannot presume or assume what it takes to implement a feature or not.

Then you either know nothing at all about CCP, EVE and the problems of the last 14 years, or you aren’t particularly good at your job.

but please do not attempt to lecture me and/or tell me what I can do in this forum section or not or how I should evaluate my ideas before posting them.

This forum is about getting feedback. I gave you feedback in the best way I saw fit.
But really, an idea like yours comes up every few days, so it’s clear as day you didn’t even bother searching the forums for something similar. It always gets ripped to shreds when people actually do bother for once pointing out why that idea is ridiculous, but in most cases “ideas” like this one have nothing but troll value since they’re so ridiculous that there isn’t any angle that would allow for a insightful discussion.

If you want people to take you seriously, then

The way I see it, you failed in both. Your idea is hardly thought through, so why exactly should other people bother spending their time to give you valid criticism when you don’t even notice the most obvious flaws in your idea yourself?

Then you either know nothing at all about CCP, EVE and the problems of the last 14 years, or you aren’t particularly good at your job.

My main was created 07.05.2003 … no worries, I have been thru it all.
But we’re far away from that date and further away from the technology then.

This forum is about getting feedback. I gave you feedback in the best way I saw fit.

You can pluck away at the idea at any given point. Attempting to lecture me on my thought and/or evaluation process ? Sorry, not here.

It always gets ripped to shreds when people actually do bother for once pointing out why that idea is ridiculous, but in most cases “ideas” like this one have nothing but troll value since they’re so ridiculous that there isn’t any angle that would allow for a insightful discussion.

Start ripping away … I have yet to see anything from you but pretending to know how it ends and taking up the role of shining knight of the forum trying to prevent ideas from reaching CCP whilst belittling me.

If you want people to take you seriously, then

I do not care if “people” take me serious or not. I want feedback on the idea itself.

The way I see it, you failed in both. Your idea is hardly thought through, so why exactly should other people bother spending their time to give you valid criticism when you don’t even notice the most obvious flaws in your idea yourself?

Your view is duly noted … and your meager attempt at reverse psychology ?

I asked you a vital question twice already, but all you managed to do was ignore it. I suppose you can’t answer it, can you?