At this time, especially in England where a lot of people are struggling financially and locked away in their homes due to the pandemic. Increasing the price of the one thing that might help keep them sane and in I would guess more than a few cases, lead to them having to cancel, is honestly very bad business.

Claiming that you’re raising the price to take into account the amount others have been paying in different currencies is not really a sustainable argument given that the value of the currency changes, sometimes drastically depending on the situation that is occuring in said host country.

Surely this is something that the CSM can bring to the attention of CCP? While I’m not naíve enough to belive that CCP while abort this decision, it needs to be highlighted to them how the players will perceive it, which is as a price hike in a crisis by a (now somewhat rare) example of a financially stable business.

An adjustment to reflect exchange rates is not a price increase - maybe you would prefer to pay in US$ where the price you pay in local currency changes daily instead of once in 6 years! That’s the situation we have in Canada.

Here’s a chart showing the value of the pound in US$ since the last adjustment. Why should you expect CCP to take the hit? 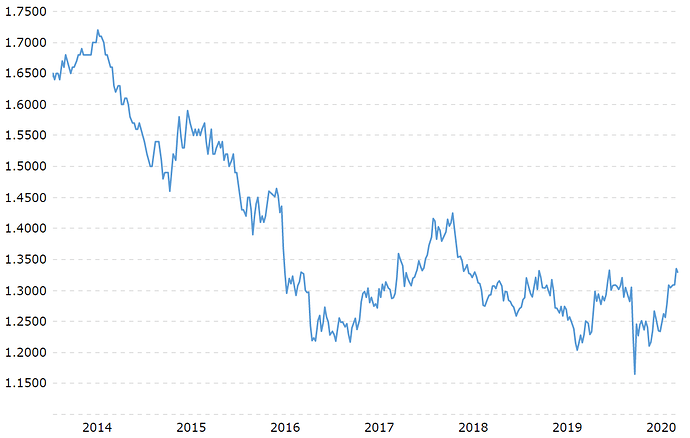 Both good points that I can’t refute under normal circumstances, however 2020 has hardly been a good example of normal.

What normally happens when CCP nerfs something is that the people rage, posts get made on the forums, threats to quit are made etc etc, and then very little of any of that actually happens. The threats are forgotten, the “quitters” never actually quit and it all just wanders off into the ether.

My issue is more one of timing. It may not have been CCP’s fault that the economy is the UK is crashing but it isn’t the fault of the people either, the government (most of which I would wager have no idea about gamers ^^) is solely responsible for that. My point is simply that this price adjustment could have waited until the situation is the UK and other affected areas had stabilised.

People are really struggling financially and those players that “just about” justified paying for Eve as a tool for keeping them sane may find themselves quitting whether they want to or not simply because the price increase shut them down.

In this respect I’ve already met real life examples of people that are packing away their ingame stuff to highsec and arranging to hibernate their accounts because they can’t find the cash to pay for it.

So if a company is taking a hit, instead of raising prices to make a profit, you want them to keep selling and not making a profit? Newsflash, GBP isn’t the first they raised this year.

It is not on CCP to figure out what is best for players in regards to personally healthy financial expenditures; CCP has an obligation to its owners to remain profitable, and that includes charging equivalent prices for its services based on the final exchange rate into its home currency.

Nobody will ever say ‘okay, now is a good time for you to increase the price we pay’.

economic suicide is paying 20% of your gross per capita turnover to a foreign power for the privilege of having them telling you what to do.

No. Economic suicide is losing 25% of your GDP via your currency crashing so that you can “recover” 20% of your GDP.

But sure, perhaps it’s worth making sacrifices to gain your independence. Paying more for EVE is just one more of those sacrifices. You made your choice and now you get to deal with the consequences.

What I don’t understand is why there is a 20% increase in price when GBP has not droped by that level compared to USD and EUR. I can understand an increase in line with some form of retail price index but this level of increase is just milking the player base…

So… it’s as close to a converted price point as CCP could average out.

Always when you think you have seen the worst of crying on the interwebs for silly first world problems, some dude comes along and holds an EVE player’s beer (how much is a beer over there btw?).

If 2 GBP is breaking you so bad, i guess you better put that subscription money in… a big bag of rice maybe… or apples, so you don’t ■■■■■■■ starve.

I have been playingng eve for almost 16 years and my reward from CCP is to have my subscription increased. Im cancelling all my accounts and going to play New World instead.

Cancelled all my accounts and purchased Amazon New World.

Cancelled all my accounts and purchased Amazon New World.

Thanks for heads-up, re New World. However, a quick look suggests that it is not actually launching now until early 2021?

That aside, I understand your pain. I’m unemployed (partly due to COVID) and also had to invest my own money to re-build my physical internet connection. Which was needed in anticipation of a hard lockdown. I get the issue, but for me, it’s been a good(ish) investment on top of the usual subs. (The caveat is prob sitting on my duff overlong as a consequence of much better streaming in general.)

Anyway. Hope it works out for you. And remember the good times. 16 years in EvE couldn’t have been all bad.

Another thread full of unempathic scoundrels.

Well, heard all those “arguments” already in threads about russian price increase, now british fellows feel our pain and have to deal with “lol blame your ■■■■ country” morons.

They call it inflation. Look it up.

Another thread full of unempathic scoundrels.

Well yes, when a country votes to devalue its currency they get to deal with the consequences. It’s not like this price increase is a surprise to anyone, the UK was warned that this would happen (among other things) and they made a clear statement that they wanted it. They can’t even blame their government going against the will of the people, the vote was open to all UK citizens and the government has done exactly what the citizens told them to do.

It’s not a question of empathy, its economics for CCP, (which they never seem to do well). It’s perceived value to their client base.

A things value is the value you can sell it at, and the value is dictated with anchors. Here the anchor is the price they have been selling at for the last few years. The pound might be worth less now on a macro scale on the UK ecosystem its still the same pound, and the previous value is the anchor.

I might sell a cap pilot for example and let an account go alpha. I dont really need this many cap pilots. If I do that and make maybe 60bil, then I can use that to plex rather than sub for GBP. That wipes out a lot of the turnover gains that CCP made with the price increase accepted by other players.

TLDR, price increases have to be considered locally and considered against the natural loss of revenue that the increase caused.

And if the original price, when converted to CCP local currency, represented operating at a loss on a per-sub basis, it doesn’t matter if they lose 5% of the impacted player base as long as the remaining 95% shift from a loss to profitability.

Not saying that is necessarily the case here, as I have no idea where the tipping point in sub pricing is as profitable vs not, but that is why looking at the value of the sub in terms of CCP’s home currency value is appropriate: that is the currency that determines CCP’s success or failure from a financial perspective.

“Question of empathy” not for CCP (though if we return to morale aspect of behaviour during covid year… complicated topic), but for people posting here (some of which sound like cold jerks at best).

Yes, economics. “Regional pricing” thing (like in Steam) exists for a reason - to have sales selling for adequate prices, rather than leaving “global price” and then find out that nobody buys.

p.s.
British prices increased slightly, but russian prices had around 40% increases.
For the price of russian eve month of omega you can buy 10 bottles of 1L milk. How much 10 bottles of littre of milk costs in britain? Anyway, eve online’s monthly fee is currently around 1/30 of average monthly russian salary . What is average salary in britain?

20 posts removed. Try and keep the off topic and Political remarks out of the Economic Discussion, as difficult as it may be. This is a Valid topic. Many of the responses are not.

CCP has recognized that addict level subscribers are their primary revenue stream, addicts will continue to buy until the price becomes totally unsustainable. Every time the subscription price goes up, alphas leave, and goons cheer.

British prices increased slightly, but russian prices had around 40% increases.
For the price of russian eve month of omega you can buy 10 bottles of 1L milk. How much 10 bottles of littre of milk costs in britain? Anyway, eve online’s monthly fee is currently around 1/30 of average monthly russian salary . What is average salary in britain?

interesting metric - a new UK sub is about 11 x 1Ltr cartons of milk. (or about two and a half pints of beer in a pub) . I wish you well my Russian friend