Abandon self entitlement embrace the stoicism!

Disclaimer: I’m not affiliated to any NS, LS, HS or WH corp, I’m just a care bear that run L4’s. Believe or not I need to put this out the way, this post is not gonna be nice.

Title should be enough, but I’m going to explore why Safety Corp is OKAY and is CCP fault the fact newbros leave too soon.

CCP should do a better job with the NPE, at no moment the new player is informed about the game philosophy, that leads to people that transform EVE into their second jobs and expectation that are not in conform with game design.

It hurts me to keep seeing new players being ganked by Safety and being cool about it, BUT they all say the SAME DAMN THING: “I WAS NOT INFORMED”. It’s not Safety or any other party to inform new players about the universe of EVE, it’s a obligation of the owner.

The amount of people that hates ganking are self entitled people that assume too much about what they don’t know. I cannot make you stop being such assumptions, I can only point you the way of enlightenment. Treating EVE as a second job or just accumulation riches will only lead to a crack in your personality and one that will follow you in RL unfortunately. Abandon this thinking for your sake, the amount of aggressiveness when you lose a ship is NOT a healthy response, this will influence your RL.

Don’t assume anything, don’t expect you ‘truth’ to be the truth. the only truth is “IF IT’S LEGAL, EXPECT IT TO HAPPEN”, and become a happier player. It does not matter why you were ganked, it only matters how you respond, it’s your life and your time after all!

I gotta say, when I first envisioned this post, it was supposed to be a bash at Safety and CODE, but after seeing how many stuff is ■■■■■■ up in this game, how many bots are killed, how many AFK people and other kind of stuff, I realized the small percentage of baddies in Safety is a small price to pay for the only resistance against “World of Warcraft” mentality. And I support it!

I’m not here to say: “Buy a permit”. I’m here to ask you, “why do you mine?”, “why do you undock that Marauder if you don’t even know how to play?”. The cold and harsh truth is, because you are self entitled, you think it’s some natural right to do any ■■■■ you like and have it your way. WELL IT COULD BE TRUE AND FINE, BUT…

But my little uneducated friend, EVE is a game and games have their MONEY PRINTER working on the other side of the EQUATION, meaning in EVE the inflation is not in the hands of politicians, but in the hands of players, and letting you (the bot aspirant) to print ISK without no real effort is a prejudice to mine and all others gameplay, you are inflating the economy (by ignorance or whatever) and projecting a bad game environment for everybody that cares about the game.

That’s why it’s needed to keep your abyssals, deadspace, ratting, mining and all other stuff under check, MOSTLY when you try to do it without any effort.

Just so you know, the career agents kill you twice.

One time is an unwinnable fight against so many damping cruisers you cannot even lock anything.

Oh funny. You know that the career agents tell you exactly that and get you killed, right? And they have been for 18 years. Well before there even was an NPE that people grew so accustomed to. It is nothing new but lots of people seem to forget that great actual new player introduction features like the career agents even exist, while they – CCP included – focus on useless tutorials.

These are the times I wish these forum had thumbs-up / thumbs-down options.

I do wonder if many players skip that career agent. I haven’t done the NPE recently, but at one time the new player had to lose their ship and pod to continue.

I do wonder if many players skip that career agent. I haven’t done the NPE recently, but at one time the new player had to lose their ship and pod to continue.

i recommend skiping all set destination to amarr

If CCP wanted to set proper expectations about their game, they would extend the tutorial and add mandatory PvP sections to it (covering all of the game’s major PvP forms). Or at the very least, they would simulate PvP experiences by using NPCs disguised as players.

They don’t want to set proper expectations for the game. What they want is to funnel players into very specific new player experience that would turn them into payers as quickly as possible. The only way they can do this is by fostering ignorance, such as for example by keeping new players trapped in a cycle of trash-tier PvE content in order to keep their incomes artificially low, so that they develop progress envy and start dumping money on subscriptions and PLEX as soon as possible. Please give me one good reason why they’d push Venture mining so hard in their own tutorials if this wasn’t the case.

They should call it Free To Die instead 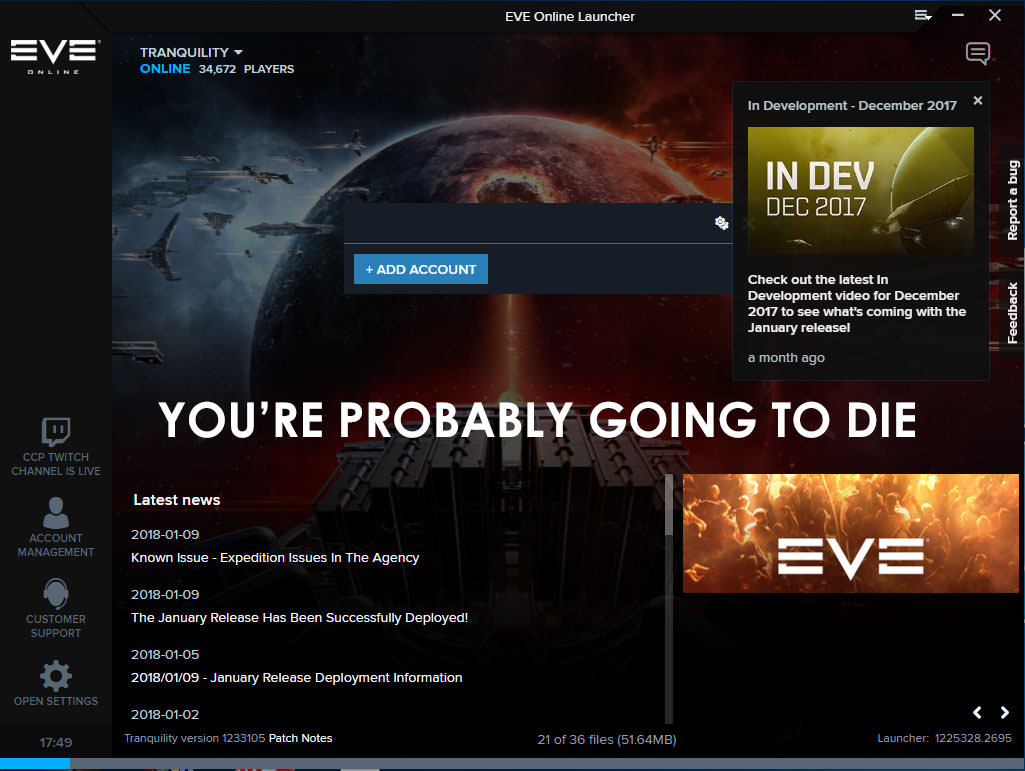 CCP have tried warning people of stuff in the past; the first Burn Jita came with a warning upon opening the client, and still the idiots flocked to Jita in their haulers, like moths to the flame flamethrower.

lol, I don’t remember ever seeing that on the Launcher.

More likely somebody did some graphics manipulation…

What, are you too lazy to do it by yourself?

The one in the previous post is my work, and if it was implemented there’d still be people moaning about suffering an explosive decompression at the hands of another.

I think EVE would do well with “purge”-style events. CONCORD systems could fail, and there would be a period of time where anything goes until they’re online again. Of course, since there’s more at stake in EVE, there would be plenty of warnings. A website/forum event announcement, launcher banner, first warning on account log-in, second warning on character selection, and one or even two warnings (with flashing lights and colors) on hitting undock. Couple this with shuttles and racial ships of some sort (maybe cruisers) with fittings crates in the reward queue.

Yes, some people would still click through all the warnings, undock their 67-billion-ISK Vargurs, die in a fire, and rage on the forums. But the utility of exposing the greater community to non-consensual PvP in a consensual manner would far exceed the losses of a few sheltered whales. Most people, not including the bot aspirants who only log in every day to go through the rote motions of mining for a few hours, would probably enjoy this, if it’s done properly.

You know what, thats reminded me of the one good thing about the Trig Invasions:

I was living in a salvager’s paradise

Coming home in a scan boat one night in Devoid, I saw a freighter cut open by Trigs. I cloaked and waited. Once the Trigs warped away, I snuck closer.

Inside, a shiny Leopard, and 2B in small items. I loaded up the Anathema and headed to a nearby station, where Id stashed a Crane, headed back and found an Astero trying to dislodge it but not knowing how. I of course did, and, in front of the puzzled Astero, juggled the learned technique to get the Leopard in my Crane, Hit the gass, cloak bounce from a safe and home free.

I still have that Leopard.

I call him Lucky Jim.

They should call it Free To Die instead

I think new players should be directed to the forums to see all the bittervets and decent advice. Reddit should not have more interaction with dev’s than the eve forum.

There was a blackout in nullsec. We all know how it went.

The nullsec blackout was a reasonable approximation. Eve is dangerous, I think most people get that from the start.