I believe we should be able to re-roll abysal mods. The idea is, roll one module as many times as you want, as long as you have the mutaplasmids to do it. This will make the mutaplasmids more scarce, so ccp should increase the drop rates/amounts to try to keep them fed enough so the players profits doesnt drop or rise too much. This will also increase the amount of items on the market, as currently most abyssal rolls are trash items, so this will free up faction/deadspace modules. The one and done roll concept is very wasteful. Another game has a similar system with riven mods, and gets rolled using kuva, each new roll requires more kuva for the roll. I believe we should adopt a similar system or we could create another isk sink. For example use mutaplasmid for the roll, and it cost 1, 5, 10 mill per reroll or whatever amounts seems fit. Thanks

The one and done roll concept is very wasteful

yeah… that was the point.

Its a risk reward thing. do you want the potential payoff of an ungodly officer web? or do you want a pretty solid T2

Not only no, but hell no. Players would all have God-level officer mods.

No they wouldnt, lol. You are still limited to mutaplasmids and their prices…

It would stil be a risk reward thing, you have to keep buying and risking the mutaplasmids right?

Don’t be silly. Your idea is to remove the risk of wasting the module and increase the how much mutaplasmid is available, the risk would be reduced drastically.

No. I’m sure mutaplismid prices would rise, but it would in no way compensate for the loss of risk in not having to worry about ded space and officer mods getting bricked.

Moreover, this would make it easier to make Zeus mods for the rich, while making it harder for everyday players to cheaper alternatives to faction mods. For those that don’t know, “low-cost alternative” abyssals are made using meta and T2 mods. So, not bricking the base module won’t benefit prices all that much. On the other hand, expensive mutaplasmid prices would definitely have an impact. Decayed mutaplasmid prices might remain reasonable, but I’m willing to bet that all the affordable gravids would shoot up in pice. And only the uber wealthy would even bother to look at the prices of unstable mutaplasmids.

So yeah, this is a change that would benefit the wealthy at the expense of the everyday players. I vote no.

Edit: Wow, I should have red your post more carefully. I see now that you said that CCP should also increase mutaplasmid drop rates in order to compensate. So, let me double down on my no, because your idea is even more broken than I had initially thought.

No they wouldnt, lol. You are still limited to mutaplasmids and their prices…

The only players benefiting from this would be players who can easily afford officer modules and players who never use mutaplasmids except to sell them. No regular abyssal modules would ever be used again.

This is an incredibly bad idea.

This takes a terrible idea and makes it ten times worse.

As someone who has very high end rolled mods no. This post would just make them more possible to make. 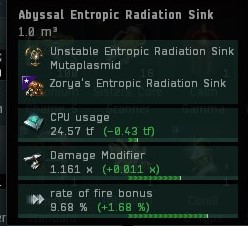 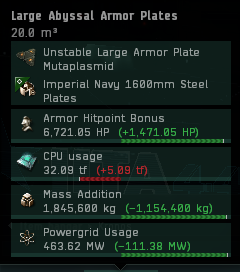 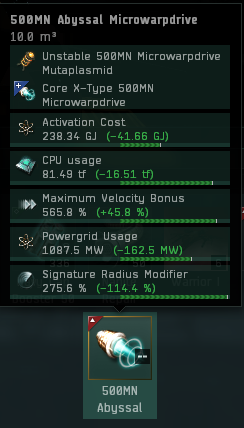 ngl stupid post ngl you need risk when rolling not just spam isk at it lmao. Plus this reduces the ammount of mods in the game ngl. But not this would more a bigger prob on the game I lefted 6 months ago and this was the first post I came back to say nah

The rich already have “zeus” mods lol. The players that can actually afford officer mods, just buy multiple deadspace and equal amount of mutaplasmids and roll them to get better stats than the comparable officer mod. Same thing applies with faction mods and t2. Ive generally always been able to roll multiple t2 mods with the gravid mutas to get equal or better than the faction. Also why does it matter if a player has a “zeus” mod? Is there an abundance of players going around and just stomping other players with crazy fitted officer fits? If so, who cares, its their isk, and they would be the ones risking it. someone buying 10 deadspace modules and rolling them vs 1 deadspace module and rolling it 10 times, wouldnt that actually make deadspace modules cheaper and more accessible to “low income” players? It seems right now that only rich players can roll high end mods anyways. i believe if this change was to happen, players would still be able to roll their t2/meta modules, but would have to maybe used the decayed. Which if you categorized module levels vs mutaplasmids used, almost always player roll t2 with gravid and the decayed gets overlooked. I believe your remark as to benefitting the wealthy at the expense of the everyday player is actually backwards. Right now its harder for the everyday player to get their hands on nice mods (in some categories) due to all the “brick” roles. The whole idea behind increasing drop rates, is to increase the supply for the new demand of mutaplasmids to try and keep their price in line or close to what they are now, i dont understand how doing that would be broken as it would help retain the affordability of the mutaplasmids for all the “everyday players” you are concerned with.

The current limiting factor of any god tier officer abyssal mod is…ISK. Lets be honest, no one is rolling an officer module with a decayed mutaplasmid, they are using unstable. This is generally the line up of mutaplasmids to the modules they are used on. officer/deadspace= unstable, sometimes deadspace=gravid, most of the time is t2=gravid, and i dont believe decayed gets used hardly at all. If CCP would like to chime in here with some factual numbers, that would be appreciated, but im sure im very close to being right about that lol. the only mutaplasmid after said change that would be tied to officers is the unstable. The price of mutaplasmids would rise if the drop rates isnt changed, if you read my post, you would of seen i commented on that to try and keep prices in line.
Actually right now only players who roll officer modules are the ones that can easily afford it! After this change, it actually would make it easier for a “lower walleted” player to have a nice rolled officer module, as they would need to only buy ONE instead of TEN to get a decent rolled one. lol

Why does the game require cheap god-rolled abyssal officer modules? Shouldn’t that be the most expensive of the expensive modules, reserved due to their price for faction capital ships?

Abyssal modules are intended to have random up- and downsides. If you remove the downsides because of cheap re-rolling, nobody would use non-abyssal modules.

It wouldnt be cheap re-rolling.

Yes it would be cheap re-rolling.

Instead of paying for dozens of officer modules to get one good roll you now just need 1 officer module. That’s significantly cheaper than it is today.