Albion seems to be doing everything EVE Online should be doing, but better?

I just saw the announced revamp of the Faction Warfare system in Albion, and I noticed what they call “Roads to Avalon” which is pretty much Wormholes in Medieval England!

I’m surprised at the amount of features Albion took “inspiration” from out of EVE, the market, the zones, the loot fairy, FACTION Warfare, and now Wormholes!

More importantly, seems like the game is doing them right, the resource gathering is actually fun as you get to run around instead of sitting in one place, the Wormholes are visible and easy to get in, and they have their own version of the Abyssal PvP that’s implemented in the open-world (so no one crying about it affecting lowsec

) and that’s not just available a few days every few weeks.

That and they seem to have ALL changes that people have been asking for in Faction Warfare. I was shocked to hear everything we have been clamoring for in Faction Warfare, for YEARS, coming out of the mouth of the dev presenting the revamped Faction Warfare, a concentrated activity, no switching, large battles encouraged, attaching success to the faction, and they actually took the Frontline idea that I and many in the community suggested. And they have yet to reveal everything they have in store for it.

This is pretty damning. Everything we have asked for in Faction Warfare, they are offering it on a silver platter, and at a way faster pace than EVE. At this point I can’t find a single feature that EVE has that Albion doesn’t, outside of spaceships…

It kinda worries me, because now what can we expect as a rework for Faction Warfare that wouldn’t be CCP copying Sandbox Interactive? Are we still going to get a Frontline system now that they have done it first, even though it would be the best solution to the problems FW has?

It feels to me like EVE is losing the initiative here. This seems obvious to me, I don’t know what kind of features are coming for this quadrant but they ought to either bring some real innovation in, or bring proper solutions to the numerous problems the game has, Low-sec, NPC Null, Mining, and FW being only some few examples. I hope they also do something with those storms, the feature is yelling for it to become a viable playstyle!

Anyway, plugging out again my Plan, because yes I have a giant case of “told you so” right now!

THE DANTELION PLAN Faction Warfare In the wake of the Chaos that enveloped the EVE Cluster, the delicate balance between the major powers was put into question as Drifters and Triglavians engulfed the cluster in conflict. As Chaos descended upon...

Also, plugging the GMVA plan for FW, because those guys had some pretty good ideas!

All they really needed was few competent people on the right place. Thats how good games are created.

Lol, Albion, as in Albion Online, the game run by an RMT cartel?

I had some old timers that I played Eve with , all of them have quit Eve about 3 years ago for this Albion Online . Idk what they see at that game , they say PvP contend . I tried the game too . Installed it and the moment I noticed the graphics in it , I uninstalled it. At their insistence I gave it a go , but after 15 min I just felt like bashing my monitor with the keyboard.

I’ve played Albion and while I think it is a good game it is a pale imitation of the pvp dynamic in Eve. That doesn’t even touch on the industry, mining, mission running, instanced pve, exploration, market economy, and community that Eve does much better as well.

Top-down gameplay? Not for me, thank you.

I use to play DAOC, and thought that’s what FW would be similar to.

Top-down gameplay? Not for me, thank you.

It’s way better to be able to zoom out until nothing but red and blue dots are visible with a grid superimposed over them. That’s some seriously killer immersion. Way better than a top down view.

What’s the point of even posting this in here? I’ve seen similar posts on the AO forum talking about EVE, as in EVE is so much better cause bla bla.

Both games share some similar aspects, namely full-loot pvp MMO and player-driven economy. This is good, because it means there are some alternative products within a market that was mainly held by CCP.

That being said, they are two fundamentally different games (on a mechanical level) where one does some things better than the other and vice versa. Let people enjoy whatever they enjoy. If one company manages to improve their product, to the point of obsoleting another, well that’s just capitalism for you.

That was one of the games I helped kickstart because they promised an EVE like experience… But it’s really just a grindy mess with a tier system that took the crappy one EVE had in the beginning and made it 10 times worse.

What do you expect a spaceship scannotron to look like?

I aint playin no game about England. 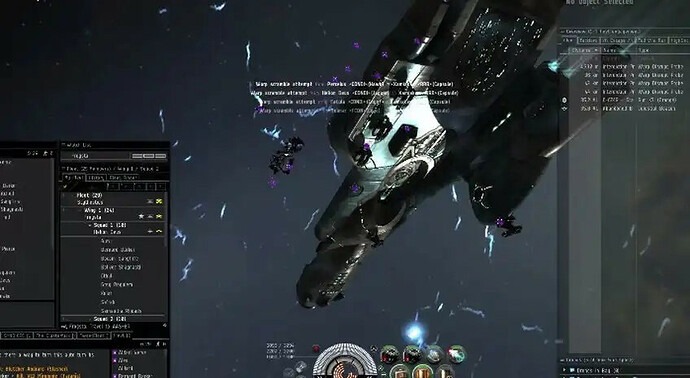 But for that you’d need to buy yourself a mouse with a wheel first.

What really matters is that one game seems to be taking the lead here.

Again, we have been clamoring for FW changes for easily more than 5 YEARS now. Albion first obviously copied the concept from EVE, but now a dozen of months later, they are doing a revamp with everything that has been asked for here for FW…

How much time until it becomes the same for null-like, wormholes-like, and High-Sec like spaces?

You are acting as if CCP cares about FW. They don’t.

In fact, CCP would like nothing more than for all of us to pack up, move to Null and join large alliances… Then they can advertise giant TIDI battles and gaming records all with the hope and goal of selling more plex.

Once you understand that, FW will make complete sense to you.

What really matters is that one game seems to be taking the lead here.

There’s no race, at least not on CCP’s part.

As a SF-fan, seeing someone talk about a game from a totally different genre “taking the lead” in something sounds weird. So what? Mario Odyssey took “the lead” from Eve in jumping and running, that’s equaly relevant to Eve as whatever Albion is doing.

Anyway, Albion can become the best game in the world, my interest in it will stay at zero, as “fantasy England” is so far removed from my interests I keep forgetting it even exists.

It feels to me like EVE is losing the initiative here.

EVE lost the initiative around 2011-2012. Since then they’ve been mostly coasting on the efforts of previous teams. The 2013 releases were pretty much their last real effort.

Other games have developed better, faster, and made more money since. Heck, a practically new kid on the block (Pearl Abyss) made enough money to buy out CCP and sit them on the back burner.

That’s the problem when 90% of your income comes from subs from suckers that throw money at you no matter how crap your game gets. You stop needing to deliver, and instead just write dev blogs about how everything you do is awesome and makes people super-happy.

I aint playin no game about England.

Are they still part of the EU in that game?