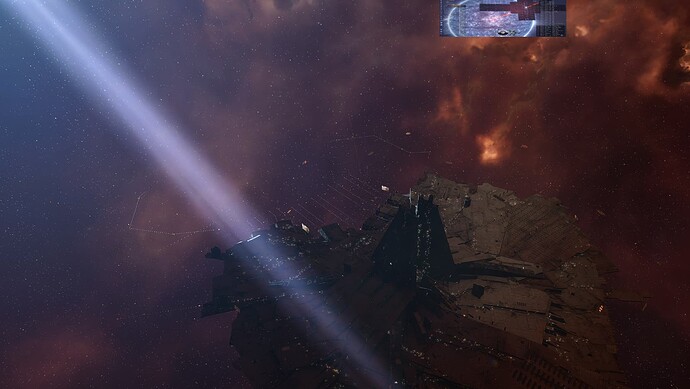 Pulses currently in excess of 10 second bursts. Similar to the Turnur sequence.

Someone has to try and save the planets’ inhabitants! This sun is going to blow HUGE!.

It seems the pulse frequency of Vard and Turnur stars is about the same.

Which does not sound good to me, as in, the technical term we seem to be looking for is “superluminal space-time instability”.

There was a third i believe. Egmar? These transmuters were a bad idea from the start. The empires have those calling for action, yet their actions show them to be content to “wait and see”.

This is unacceptable. Even in assisting the Triglavians, im well aware that they have technology that can be and is dangerous, moreso in the wrong hands. I propose a full capsuleer offensive upon the Transmuters in both Vard and Egmar. It is too late for Turnur. Vard may also be beyond saving. But for Egmar, we may have time to stop this before it also destabilizes. Im aware that destroying the structure may cause the very issue hoping to be avoided, but sitting idle will guarantee it.

Blockquote
My current theory on what will happen is that the star will go supernovea/magnetic field flips and huge bursts of energy get released then the star gates will be shutdown by the rays.
The system will be cutt of from other systems.
After the event wormholes will apear more frequently in and around the turnur system leading in and out of turnur.
One after one the other stars with stellar transmuters will experience the same event as turnur will and will also be cut off.
Then amarr will build a pochven 2.0 where they can develop new technologies without interferrence of any other faction.

Provided are quick-quality recordings of:

Egmar’s star is also pulsing. The three do indeed seem to be linked.

That is assuming the linear regression is the same as turnur

This may sound odd given the circumstances, but I’m concerned at the prospect of anyone other than the Amarr managing them. The Empire left a skeleton crew in charge of the installation that were fully aware they were about to die for some unknown purpose. Whatever they did could have reduced the violent phenomena following the event like space-time instability. The Trigs were quick to show up and have a look and I doubt it went unnoticed by the Drifters.

The Republic is in a precarious position: It has to make an ethical decision layered on top of a blind choice. If they shut the transmuters down it could cause the destabilization to be even worse. There’s no way of knowing without the Amarr chiming in to tell them, and why would they do that? They built these things in unfriendly territory for a reason and it wasn’t to share their secrets.

On the bright side Egmar’s full of practically uninhabitable planets. Guess that’s one thing to be thankful for. But remember: A massive superluminal event fried the Jove’s jumpgate network. If it can happen to them it can happen to us.

Whatever they did could have reduced the violent phenomena following the event like space-time instability.

Did that bold leap of logic require cybernetic reinforcement to your legs or are you naturally so agile?

You can call it a leap if you like, but there’s most certainly some reason the Amarr built their disposable science projects in Republic space. Even with proper oversight one of these on-going projects ended in disaster. The other two are now in tribal hands and the Empire doesn’t seem to care all that much. That is extremely suspicious to me.

Why construct the skeleton crew out of non-capsuleers that need to have “their souls commended to God?” Loss of life could have essentially been zero, but instead they sacrificed a handful of scientists. The only reason I can imagine is so the crew takes the installation’s secrets to their grave.

These transmuters are all a cataclysm waiting to happen. It’s bad enough that the Amarr are playing with them, but the Republic knows absolutely nothing about them. We have no clue whether stopping or altering the transmutation process would be better or worse. Nobody does with the potential exception of the Amarr Empire and they’re not telling.

Even with proper oversight one of these on-going projects ended in disaster.

What makes you think there was ‘proper oversight’? What does that even mean?

A team of scientists, some of whom are now dead, has been observing and interacting the process of stellar transmutation from beginning, and possibly not for the first time. It’s very likely that the Amarr gleaned some insights into the transmutation process from their activities in Arshat. Unfortunately the Republic have been left woefully uninformed and are now sitting on top of two potential disasters they are not equipped to deal with. In my opinion they need all the help they can get.

A team of scientists, some of whom are now dead, has been observing and interacting the process of stellar transmutation from beginning, and possibly not for the first time.

Uh-huh. But the team of scientists who put this thing in place and operated can’t constitute ‘proper oversight’ on themselves. What were they doing there? Oh, well, we can ask the oversight group… which was themselves? So if they’d lied about what they were doing, they’d catch themselves and totally blow the whistle on themselves? Somehow… I doubt it.

There has been no oversight. There’s only been ‘trust us, we’re totally on the level here! Would we lie about lying to you?’

The scientists were overseeing the facility, and the Empire were overseeing the scientists. Bear in mind that’s not to challenge your point, since the Amarr answer only to themselves. This isn’t the first time the Empire has exercised a complete disregard for secular ethics when studying technology they do not fully understand, and it won’t be the last. I recall a certain caste of immortal soldiers with roots tied to the weaponization of Sleeper implants as well. That didn’t turn out well for anyone involved, especially the warclone enclaves.

‘Secular ethics’? If you mean ‘ethics that aren’t dependent on the imaginary sky-fairy of Athra’, that’s just ‘ethics’.

What are you, the adjective police?

No, I’m making the point that the Amarr don’t get to try to make everyone else’s ethics into a specialized, subset of ‘ethics’. They’re the whack-a-doos, not the rest of us.

Ethics itself is a subset of philosophy and everything’s categorized. Utilitarian or Deontological, Secular or Religious, etc. Either way, my choice of words wasn’t meant to imply anything more than specificity.

I wouldn’t even call this an academic distinction, because no matter what ethical standard you apply - even those of their own religion - the actions of the Amarr Empire are inexcusable.

The Turnur disaster is a real “acts which would be wholly unpardonable even if they were to choose their own judges” situation.