Really, only one thing gives me pause to either idea, and that is that I think if the Triglavians had wanted to, given their technology, their numbers, their ability to appear at will beyond or behind whatever defenses they please, they could have likely taken over the entire cluster by now. Conquest, whether hard-fought or easy, does not seem to be their purpose here in our space.

I wish I knew what precisely their goal is, but I wouldn’t surmise the Empire was disproportionately selected for conquest one way or the other, or they’d be trying harder to do precisely that. Selecting a weak area and entering it with the full strength of their force, setting up a staging area, that sort of thing. If anything, their tactics are the ones I would have ascribed to skirmishers, but what they would be distracting from, scouting, or why they would be occupying our time is beyond me.

Or, and this is purely me not knowing much about their home in the Abyss, but… maybe we’re really just the ‘closest’? By whatever method they judge their travel to our space, it might simply be that we’re the easiest to reach by some metric, and that they would be in all spaces equally were it otherwise. I at least wouldn’t necessarily assume that the disproportionate amount of activity in Imperial space has everything to do with the Empire being there.

I’d hope not, sport implies an audience. I thought our existence was questionable enough with an audience of people here watching us.

You can play or participate in a sport with nobody watching.

I agree it doesn’t require an audience, but it does require an opponent or competitor!

Regarding the motives of the Convocation of Triglav, we have quiet some insight already. They are, in some areas, pretty open about it. Like the abyssal filaments, the k-space invasions are drawing us into contests of some sort. They refered to the World Ark as ‘Proving Grounds’ and every time Zorya Triglav’s representation entered the battlefield “we have intercepted transmissions from Zorya’s ship. They appear to be issuing a formal challenge.” They also urge us to join their ‘flow’. And we are most likely inhabitants of a stellar region they refer to as their ‘lost domains’.

That we now see them manipulate our suns is something that does not really fit into this scheme. However, the general narrative of the proving and the flow seems to hold true so far. Please allow me to refer to our Yulai Triglav Conference last year. The things which were discussed during this venue still largely represent the status quo of what we know. We have few and only limited clues, but those we have are quiet solid.

However, the title of this thread is quiet unsettling. After coming back to it a few hours later I was thinking that the question for the relationship between “Amarrians and Triglavians” is a valid one, even though I do not believe that Amarr is a distinct and special target right now. We will look deeper into this.

boredom
Everything is no longer in this game Lore

It is an interesting question isn’t it? Why do all these precursor humans seem to have it in for the Amarr Empire?

You can’t really say the Jove had it in for the Amarr when the Amarr were the aggressors there. ‘Hey, why did you hit me back instead of hitting the Gallente when I punched you?’ is kind of a stupid question.

As for the larger question of ‘Why the Empire?’… I think part of it likely is simply the size of the Empire, as a matter of statistics… and the location of the Empire. We know, for example, that the old ‘Jove colonies’ or whatever the Trigs called them, were in Stain. We have reason to believe that the oldest points of human activity in New Eden are in Genesis. If the Trigs are looking to reclaim their ‘ancient homelands’ or whatever…

Well, if you need ‘ancient’ and you’re looking at Jove offshoots… what’s between Stain and Genesis? 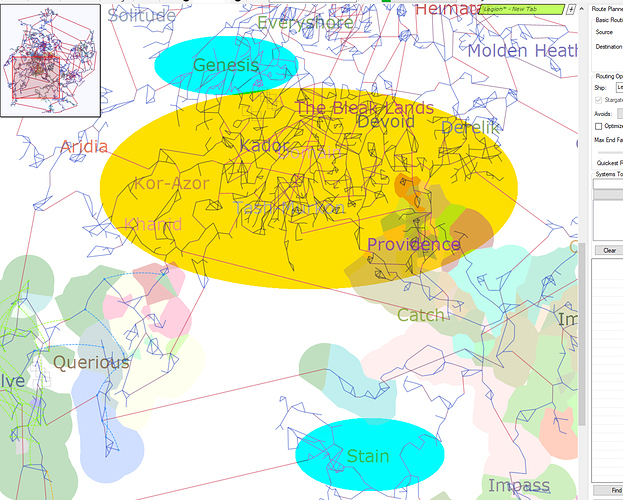 It is possibly God’s gift to His Empire. The Triglavians apparently seek to test their adversaries, that they may be worthy by feats of strength in battle. Possibly using the crucible of war to burn away that which is unworthy in His Empire.

Ever stop and think, “hey, maybe this is our God disapproving of our actions and is punishing us for them?” That or one of those tests of faith you all seem to believe are anything more than bad luck?

I’ve noticed a trend, that they talk about tests of faith all the time, but always talking about it like its happening to some one else, and never themselves.

Oh definately noticed that trend. How convenient it is to be blind to your own trials but all knowing for another’s. Feels alot different on the receiving end, don’t it?

As updates were requested on the movement of the Triglavians, it seems as if the Amarrian theory isn’t true. I’m sure that many of those that are participating in the conflicts around western Minmatar space have noticed their presence around Amamake and surrounding areas, and anyone that has visited Jita recently has perhaps noticed the invasion occurring just a couple jumps away. Two are in Gallente space, with only one currently active in Amarrian space, deep in low-security Kor-Azor.

I suppose when you possess the most space out of any empire, anomalies like that which happened just a few days ago can happen.

edit: It seems that once again, an invasion has emerged in Genesis, close to where the last invasion here was. The Azedi system may be in particular danger, as it was also affected by the previous week’s invasion. As there is a habitable, temperate planet there, hopefully anyone that may be living on it are well.

So… there’s yet another invasion in Genesis. It’s the third one in the last two weeks, and they seem to all be hitting the western end of Genesis. Which is where I work, and partly why I’m posting this, but… is the Amarrian government doing anything about this? Increasing patrols, perhaps? I could fight them myself, but they’re rather nasty as I’m sure everyone has come to realise, and admittedly far beyond the capabilities that I possess.

Should also point out that there’s an incursion in Aven as well. Did someone around here do something to piss God off? I’ll never understand it.

Ever stop and think, “hey, maybe this is our God disapproving of our actions and is punishing us for them?” That or one of those tests of faith you all seem to believe are anything more than bad luck?

Yes. We are being punished for our liberalism and abolitionism.

It takes a special kind of stupid to think our problems are Liberalism and abolitionism right after we just detonated an antimatter bomb over civilians during an invasion of a planet for the purpose of slaving.

detonated an antimatter bomb over civilians

Over civilians many Amarr pilots have been insisting are happy Amarr faithful, no less.