2021-05-12 CoachSub was doing his stream, I’m not go into the merit if the stream was good or not, or if he’s toxic or not. The stream really lagged a lot and went down. 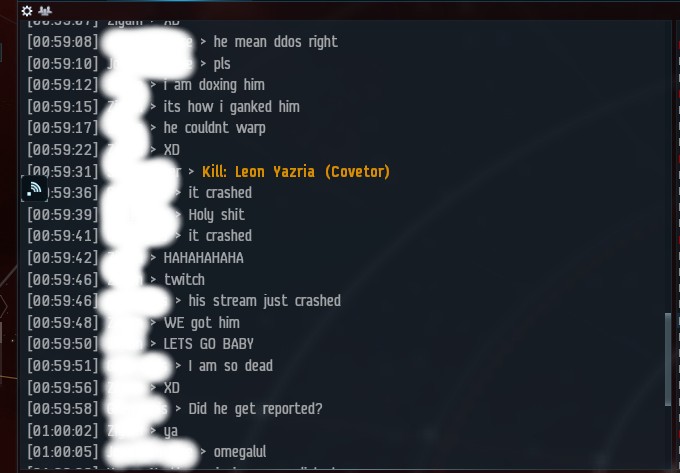 not sure if it was just his stream, but my connection dropped twice around the same time too.

why TF you hide names? if you are trying to expose something go ahead and grow a pair…

i think i saw him lose his orca on a stream recently and then lose his mind screeching and dancing around and cursing gankers.

he seemed unhinged at best.

He called me a b-word, and now he’s down 7 billion isk.

You call me worse , you even called me a terrorist on a stream the other night . Happily watching twitch I was and all I said was hi to the guy, not even stream snipping , unlike some people.

When people start Eve, they are told it’s a dark hostile place that brings out the worst and best in people.

I don’t think they really understand the extent of this fact.

Maybe they think it’s marketing hype like a lot of games claim , well Eve is really what it says on the box.

Remember there are 2 side to pick I’ve chosen mine and Aiko has chosen hers and our for ever war will continue.

I think some method of cooling down all the emotions have to be exerted.

CCP should know about that from all interested parties.

I think some method of cooling down all the emotions have to be exerted.

I think not. On the contrary. That’s one part of EVE that needs to be nurtured.
Just let whatever side of yourself you want to be in touch with explode and let the chips fall where they may.

I too was suffering connection problems about this time. Damn kids.

not even stream snipping , unlike some people.

Stream snipping is probably the most hilarious thing ever in gaming.

It’s even better if the stream is delayed, so you can concentrate on ganking and then sit back and watch the chaos you just caused.

How many times can you gank a streamer before it becomes griefing a serious question?

how many you want, he is streaming , ganking is content
maybe you should not make a living of following the poor guy and ganking
a good rule is , more than a few days in a roll … maybe the ganker should find another targets to …

Fair enough thanks for the answer, satisfied my curiosity ty.

So the Boners Room was so bad it was banned, but streaming and DDOSing the streams is ok?

brings out the worst and best in people.

Sorry I don’t buy this saying, you are either good people both over the internet and out in the world, if you find yourself doing unwanted things to others because it anonymous then that just means your a piece of work but don’t acknowledge it and hide behind eula’s and other things to give justification.

There’s nothing wrong with being aggressive and slinging poo, but if someone is not interested there are many other poo slingers to choose from.

Uh wha? Its a Roleplaying Game.

Thats akin to saying actors must be bad people if they play villians.

Role playing so good, they can’t be bad!

Sorry not sure what you mean.

Ive stolen from an Alliance and pulled the pins out to make sure it collapsed and closed the holding corp.

I have never ever stolen so much as a pencil from work.

Now, does that make me bad because I did it in a video game but not reality? Does the simulation somehow prove I am a potential criminal?

Should we be setting up a Pre-Crimes Division?

Role playing so good, they can’t be bad!

im a atheistic , science driven kind of guy
i roleplay a religious zealot in EVE
its so far away from real me that i find it really funny
we pick roles in the fictitious new eden world , not good or bad IMO