Totality finally hit New Eden, as my respected colleague Giesta Nimbelain announced earlier. I am currently reporting from within Niarja, or what’s left from it. Let me share with you some first observations and impressions. Please continue to verify and expand on Niarja as a case study as you see fit. 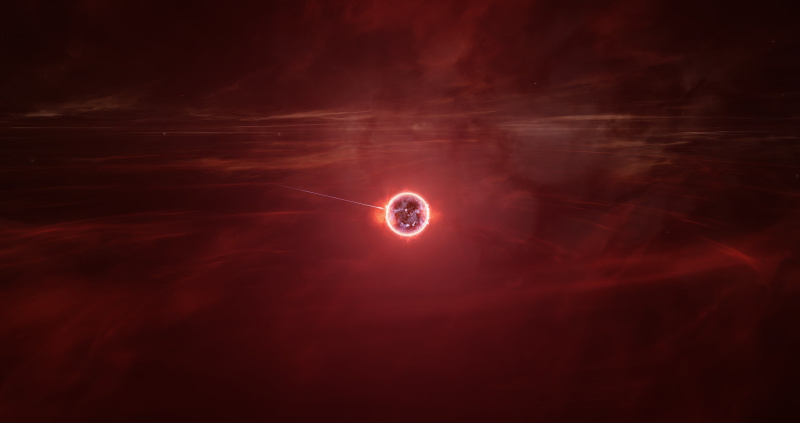 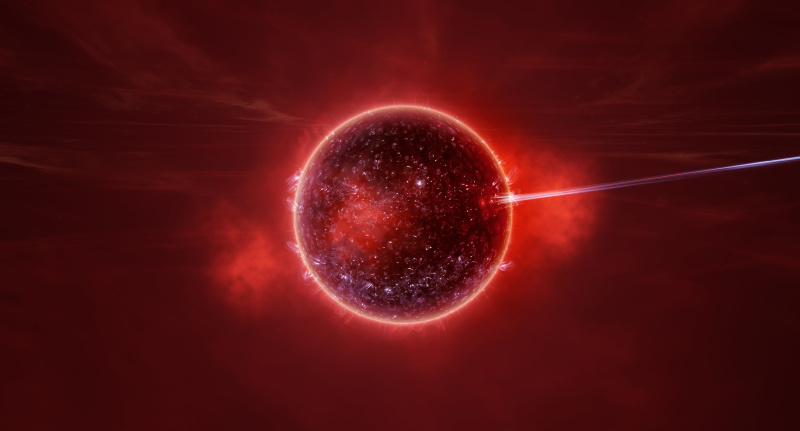 A new gate structure has appeared. Two exit gates from Niarja to Raravoss and Harva are located in vicinity to the triangle’s tips. The construct is labeled “Svarog Vyraj Anchorage”: 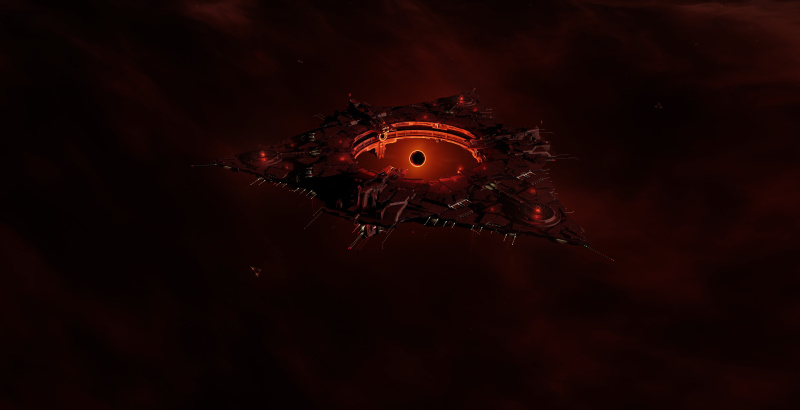 The three former exit gates are now defunct and classified as “disrupted gates”. Please behold the infestation by crystalline mass, clearly visible on the MAD and KAA gates. The level of infestation on the MAD gate is significantly worse: 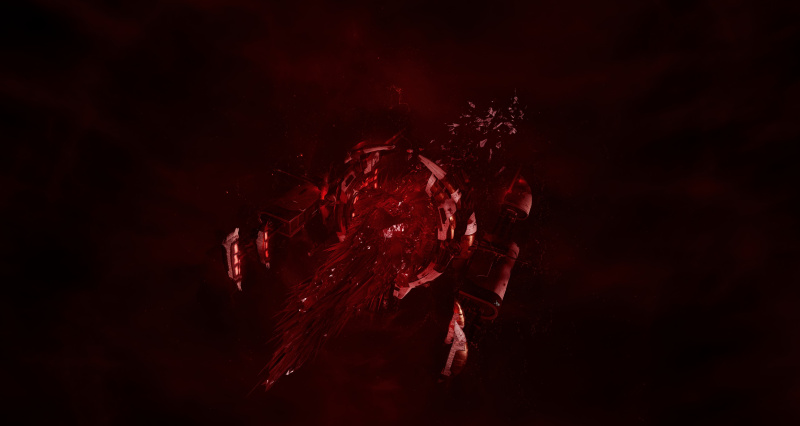 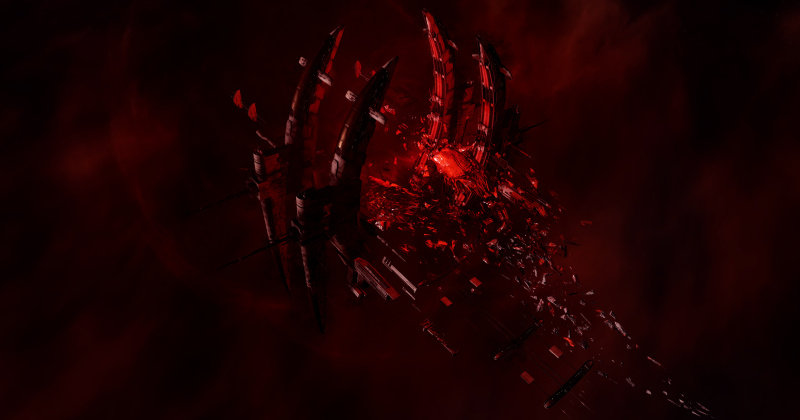 That’s incredible, thanks for sharing all of this !

pardon my enthusiasm, but the stargate pic is entirely coherent with my Mass-Energy Ratio. By altering the MER of the system, what was before a point of neutral energy balance switched to matter state. And the gravitational well formed by belts was enough to create a deadspace pocket ! I assume that planets, moons and stations are still in places ? If my calculation were correct, there was an important risk that all in space crafts would be destroyed as well. My team has difficulties contac…

Update on wormholes in Niarja

A brief update on wormholes. Apparently, wormhole exits still spawn in Niarja. A K162 leading to null sec (The Spire) appears as a usual signature (QTZ-496 in this case). However, the wormhole is settled in a bed of Isogen-10 crystal formations. Also, rogue drones, obviously indifferent to Triglavian presence, guard the wormhole exit. Explorers are advised to warp in on long distance and assess the situation. 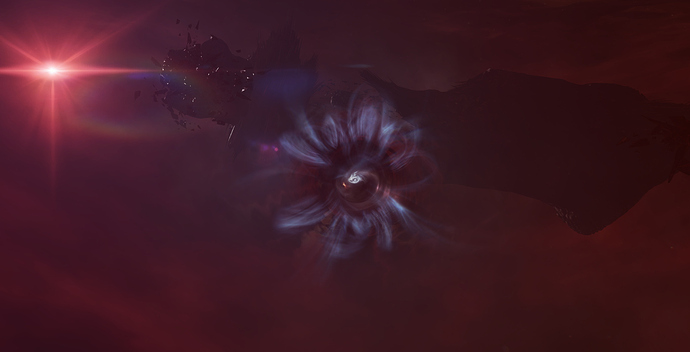 Caused by the separation of Totality systems from the New Eden stargate network, we now see a new region emerge, called Pochven by the invaders. This region is divided into three constellations (Krai) and corresponding individual solar systems. The constellations are assumedly controlled by the Perun, Svarog and Veles clades, hence the constellation names of Krai Perun, Krai Svarog, and Krai Veles.

Due to the distribution of favorable blue stars for final and total liminality we now see a regional topography on top and across our well known k-space star map: 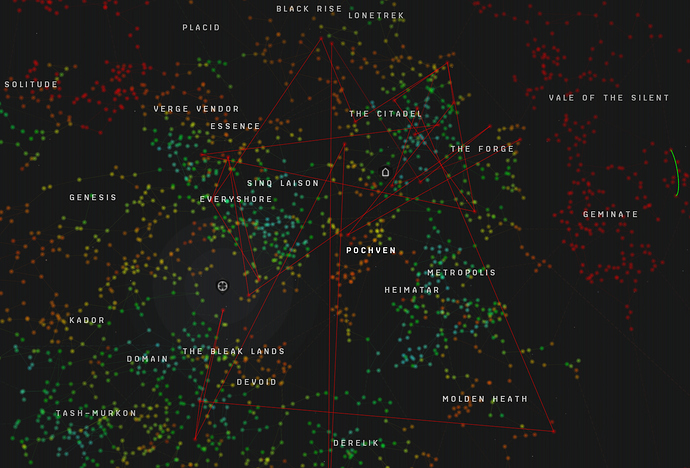 Niarja is presently part of the Krai Svarog Constellation in the newly formed Pochven region. Triglavian stargates connect Niarja to Harva and Raravoss, both systems are also controlled by the Svarog Clade.

Update on the Anchorage

After closer inspection of the Svarog Vyraj Anchorage it appears that this structure functions as some kind of station, tribunal, or political landmark. While it first appeared as an anchor for the Triglavian gates (which it still is, somehow), it is now obvious that the structure also has hangars for capital class vessels and beyond, namely World Arks. 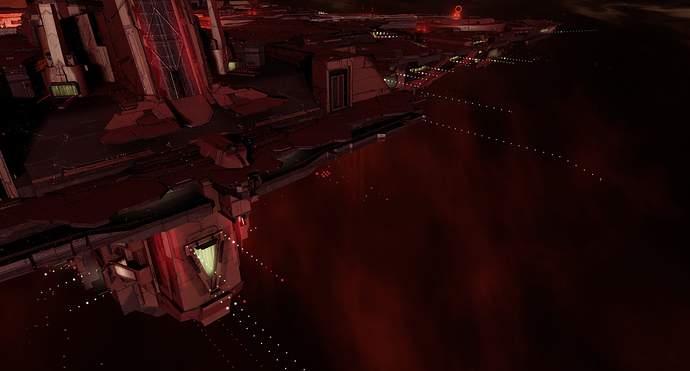 Also, the three tips of the triangular shape seem to be dedicated wings for the three Triglavian clades, the Svarog, Veles, and Perun. The otherwise largely identical sides of the structures show different banners on each tip.

From a scientific point of view I was able to investigate a phenomenon I havn’t wittnessed before. The actual shaping of what I assume is zero-point matter. Observers are invited by the open display of the Triglavian’s mastery of gravitational manipulation - just to watch solid matter fall into a gravity trap of unique design. Please regard the following footage if you like.

On a more practical level, roaming fleets of Gila and Basilisks have begun to haunt the system, following the trail of Rogue Drones and Triglavian vessels alike, as it seems.

Also, I want to reference the field log of Maira Blackfire, who is undertaking a similar exploration for the system of Otanuomi.

Edit: The Svarog Vyraj Anchorage seems to have a very strong gravitational effect on grid as well, pulling any warp attempts to the anchor beacon, similar to deadspace pockets. Corpses and wrecks are already littered around the warp-in points. Tread carefully here as well.

Is - Is that generating power by converting mass to energy directly?

From what analysis I can conduct so far, it seems that way. Of course, this is not a laboratory. If specific data would help you to test the hypothesis, let me know. I am currently focusing on the more practical observations, since I have to stick to passive sensors most of the time.

I also want to add that since roughly 12 hours no more Cosmic Signatures appeared in Niarja. The only things left are three anomalies, the World Ark, the Stellar Fleet Deployment site and a mineral field.

I’m trying to get to my lab in ignebaener to set up a new laboratory precisely to test this hypothesis.

If you manage to get into this system, I’ll tell to my teams on field to help you, just let me know.

The observed effect us the coalescing of a Triglavian criticality and the resulting horizon boundary; this same effect was observed when the World Arks were discovered in construction in the Abyss.

I might assume that the Anchorages are merely beginning to spin up for a deeper purpose; after all, anchoring the Domain of Bujan into Pochven may involve a desired direct gateway between the two, no?

Update on Wormhole Connectivity in Niarja

After roughly 36 hours, I could identify a single new wormhole in Niarja (K162, LAS-402), leading to null security space in Perrigen Falls. The rogue drone presence is significant and local capsuleers are fighting on grid. Triglavians do also visit the wormhole entrance and engage or are engaged accordingly.

Among the rogue drone vessels are Overminds and other large vessels.

The observed effect is the coalescing of a Triglavian criticality and the resulting horizon boundary; this same effect was observed when the World Arks were discovered in construction in the Abyss.

Thank you for this important reference. This is enlightening. And I agree, that the process of integration between the two domains is still an ongoing process. Regarding the Anchorage, its mass effect on warp-ins reaches out to about 10,000 kilometers (between 8,000 and 15,000 km, specifically).

EDIT: I just realised, that wormhole you’re describing that led to Perrigen Falls was the same wormhole I was engaging the Triglavians on, along with a few buddies. Glad we got to see the inside without actually going there. Thanks for the screenshots, and may I refer you to my thread in General Discussion reporting on that encounter… Linky

If they can get their cargo out. Access to and through Pochven is already heavily restricted, requiring Kybernauts to ‘prove’ themselves to almost masochistic degrees before their masked ‘goddess’ would even let them use their stargates, clone services and filaments. Of course, wormholes are also an option, but that too requires a lot of careful planning and dodging Drifter and Rogue Drone fleets swarming around. It’s quite hilarious actually.

I got out… and it wasn’t the hardest, but I also made a few friends along the way. Cause apparently there is one thing the Empires and our new neighbours have in common, they really don’t like drones and given the place is littered with them, a few well-placed shots and I was on my way back known space.

And let me tell you after having been stuck in a pod for 4 days a bath and a glass of wine feels like heaven.

Whoever had the foresight to start anchoring a keepstar and had a hundred or so titans cloaked in space waiting for it to online is now the dominant force in that new domain.

Unfortunately, I don’t think anyone did.

What is the Caldari saying… Hindsight is 20/20

Not even hindsight. We discussed it, but thought moving all our assets in there ahead of totality would be just a little too Goony, even for us.

Following policies set forth by the CRC Communications Policy, 6 messages have been removed from this thread for being Out of Character.