[ARC] In support of the Caldari State: the Octavia-initiative

Greetings capsuleers and those with access to the IGS,

The objective of the Octavia-initiative is to support the defense of the Caldari territory and citizens against the Triglavian threat as well as against the numerous pirate factions operating within Caldari territory. This will help bring more stability to the Caldari State in particular and Empire controlled space in general. The Octavia-initiative aims to achieve this objective by doing the following:

The initiative aims to build and provide multiple squadrons to the Caldari State, consisting of the following flights and ship hulls:

Completed squadrons will be presented to the Caldari State, at the end of the Initiative. The current end date will be the last day of the 9th month of this year. Final transfer will take place with the stipulation that the use and deployment of the completed squadrons is for the defense of the Caldari territory and citizens against the Triglavian threat as well as against the numerous pirate factions operating within Caldari territory. They are not to be used and deployed within the Militia warzones.

The final completed squadron will be made available for capsuleer use. This means that depending on the number of participants, ships or complete flights will be awarded to the top contributors on a individual, corporation and maybe even alliance level. As ARC is a scientific organisation and wishes to remain so, it’s leadership is excluded from the ranking and ARC will not keep any ISK, ships or materials related to this initiative. There will be regular updates to provide full transparency on the state of the Octavia-Initiative and the collected/donated materials.

As of the the 13th day of the 9th month, the Octavia-initiative has the following number of completed ships, flights and squadrons:

As of the the 13th day of the 9th month, the Octavia-initiative has the following amount of materials:

In order to facilitate a ranking for top contributors; ships and materials will be given an ISK value. This will allow for a clear way to rank the contributions. The ISK values are as such:

This section is reserved as the second part for the ranking of the individual, corporate and possible alliance level of contributors

My congratulations in using such a novel approach to supporting the State as a capsuleer.

Looking forward to seeing the completed squadrons in action!

The month has ended and that means that the Octavia-initiative has come to a close. The intial scope turned out to be too ambitious as we did not succeed in including both tech 1 and Navy Issue variants for the battleships. The initiative did succeed in providing tech 1 battleships in sufficient numbers to present at least 1 complete squadron and multiple supporting Flights.

I wish to repeat that this transfer takes place with the stipulation that the use and deployment of the ships and materials is for the defense of the Caldari territory and citizens against the Triglavian threat as well as against the numerous pirate factions operating within Caldari territory. The ships and materials are not to be used with regards to the Militia warzones. 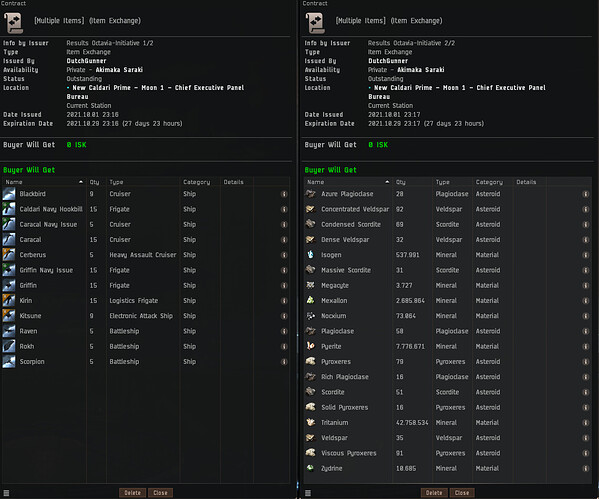 The pilots that have made contributions towards the initiative and are included in the Rankings will receive the following for their contributions: