Augmented Mining Drones worth it?

I’ve got an Orca and have been running the math on Augmented mining drones. It seems like it would take over 300 hours of continuous mining in order to pay for themselves. Does that sound right?

Does that sound right? Is there something that I am missing? If that is right, then why do people buy these things?

Does that sound right? Is there something that I am missing? If that is right, then why do people buy these things?

People are both bad at math and estimating risk. Most just go with their gut that “bigger is better” and don’t stop to run the numbers.

I haven’t checked your numbers, but they are completely plausible. Incremental bonuses come at massive costs in the game, and in many case not worth the investment.

Good on you for looking at the whole picture. 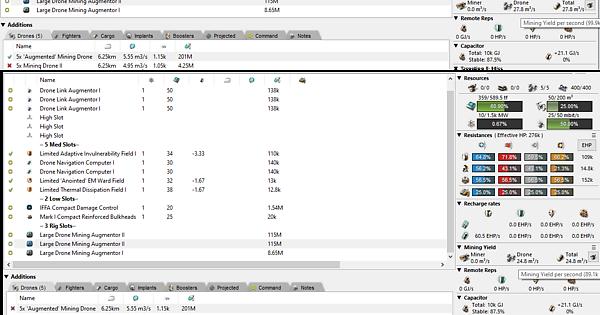 Or just go Null and use Rorqual 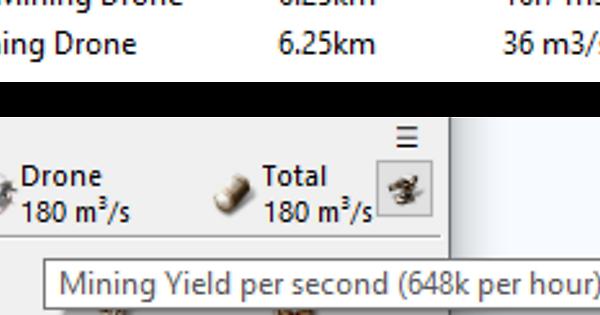 Yes they are very well worth it. I scoop them up every now and then after downtime before the afk miners sign back in.

I scoop them up every now and then after downtime

Afaik the drones are in the dronebay on DC or something now. Only if you warp away they stand in place.

Yes augmented are worth it, unless you’re sitting within 5,000m of the rock.

We figured out that overtime an augmented will mine more than other drones due to its faster travel time.

Most focus on the amount a drone can pull from a rock, but completely forget to include the travel times to and from the rock. So on a single trip some drones appear to do better, but overtime, and doing faster multiple trips the augmented pulls more.

We tested this with Rorq and excavator vs augmented, at 1/4 drone range or more the augmented cleared the field faster, but under that the excavator won out.

First of all to clarify if you disconnect then it usually takes some time for the system to recognize this and when it does the ship begins emergency warp and recalls the drones, if the drones make it before the warp then they enter drone bay thus it depends on ship align time, drone speed and distance whether they make it.

When the server shuts down there is no time for emergency warp and the system doesn’t even try that, it simply cuts off while the drones are out in space. After downtime the drones spawn in space as they are now in abandoned state while the ship either did not respawn or if did the drones are no longer connected, thus even if at this point as the pilot is no longer present the ship emergency warps and the drones will not be recalled as they are no longer connected. Even if you sign back in you have to reconnect to your drones and recall them manually after such an event.

Unless this has been changed recently but am not aware of such change. Is there a patch note or announcement regarding such change?

If that is right, then why do people buy these things?

Because they are greedy, and care only about their yield.

If that is right, then why do people buy these things?

Because, spending money is fun, especially when you have so much to spare

Because they are greedy, and care only about their yield.

Also consider that you’re more likely to be ganked if you have blingy drones out, because anyone can see them on d-scan and they drop 100% of the time, whereas with blingy modules they can’t see them without a ship-scanner and they’re destroyed in the explosion a significant percentage of the time. So you’re really making yourself a much more lucrative target by using those things - even if they are a good investment.