So I’ve done battlefields in FW for awhile, and I’ve seen a fairly committed effort to exploit it. Initially, there was an exploit where CalMil would gain LP even if they lost, no matter how far they were from the battlefield, so in addition to the content CCP created, there was a second, scummy game where CalMil alts in nano-fit slashers would try to get inside in bulk and burn out 300-1000km away so they get free LP.

Now the game becomes “How can I exploit the BF and gain as much LP as possible without contributing period?” Players are creating a ridiculous number of GalMil/CalMil alts, and depending on which side is dominating, they will send 5-10 newly created toons to leech 5-10x the LP in barely functional T1 frigates or destroyers. In response, I’ve seen some players fighting back by setting up a toon to blap any non-contributer, player suddenly burning 300km away from their allies to literally nowhere, or new toon who for some reason was jammed into FW Day 1 and is suddenly trying to enter the battlefield.

Now the game becomes “Well how can I dodge these players kill me and all my alts?”

There are now seagulls burning out into the battlefield just far enough that they can cloak and automatically gain LP with no counterplay from players who wish to remove them. That, and it also just looks plain disgusting watching it happen in real time. I love the new content CCP has introduced, but I’m not fond of watching this secondary game play out at the same time. It’s demoralizing and it encourages other players to stop trying or not commit nearly as much.

Can we remove or disable cloaking in Battlefields? It serves no functional purpose in an environment where covert ops (T2) ships can’t be inside in the first place. It’s just helping these people leech. These people will do literally anything to gain LP without contributing.

Everything can then be handled by the players from there.

Farmers will always exploit any CCP-created artificial barriers to protect them, removing barriers and letting players police puts the balance back into player hands and put a check onto farmers – or at least forces them to engage with the social aspect of the sandbox.

Players are creating a ridiculous number of GalMil/CalMil alts, and depending on which side is dominating, they will send 5-10 newly created toons to leech 5-10x the LP in barely functional T1 frigates or destroyers.

Ignoring that you can get a half-decent frigate with the 1m SP on offer for new accounts, this a dangerous precedent to set. Where do you draw the line at gate-keeping FW from new players, or players simply looking to try it without the hassle of relocating and leaving their existing corp/alliance?

Is a more experienced player who is flying a well-fit and max-skilled faction cruiser justified in removing those that player might see as beneath him/her from the field? I can tell you that I have seen “new players” not in groups be attacked by their own miltia, because “probably a farmer”…

Have you considered this strategy has developed in response to players gate-keeping the plexes to those who they deem unworthy? I have seen many instances of people shooting at newbies purely out of greed for the LP.

Given the substantial nerfs to cloaking modules in years past, I think it would be supremely unfair to make them even less useful.

Can we remove or disable cloaking in Battlefields? It serves no functional purpose in an environment where covert ops (T2) ships can’t be inside in the first place. It’s just helping these people leech. These people will do literally anything to gain LP without contributing.

That would be solving one symptom of the actual problem you are addressing. This is what’s sometimes referred to as the XY problem. You are proposing Y as a solution, when you really want to solve for X, or “How can we reward actual contribution (a/k/a risk)”?

I think a more comprehensive solution lies within awarding LP rewards based on something other than proximity. I would suggest that some combination of damage/healing dealt (weighted minimally, because you probably do want fast tacklers at rally points) and hull cost + module cost. The more ISK you’ve invested into your vessel, the more LP rewards you will receive.

[EDIT]
5. New players don’t sit outside the gate in empty T1 frigates, waiting for the contested % to be around 99.5%, and then slide in all together.

[EDIT again… reading as I go]
6. Your proposed solution doesn’t work because it ignores roles. There are legitimate players in frigates serving as tackle. They know where they need to be and guard the beacons of opposing militias and neutrals. Or, they generally patrol around the area of the battlefield (not 300km away). These pilots do not actively DPS and it would be unfair to them. I’m only asking to remove cloaking devices.

You’re still not addressing the core of the problem; players/farmers who are looking to earn LP (nothing wrong with that) without contributing (nothing mechanically wrong with that, although ethically I think we are in agreenace that would be degenerate behavior).

The best solution would be to have LP payouts reward actual risk, rather than simply presence.

There are so many other things wrong with FW that need addressing, such as people corp-hopping so they can kill militia mates, which I believe would appropriately be classed as an exploit.

You don’t think there’s something wrong with this? 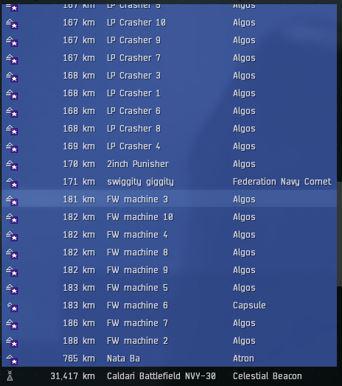 I’d actually like CSM input on whether or not this is too much of an ask:
Remove cloaking from Battlefields
@Brisc_Rubal

This sounds like a perfect place to drop a mobile observatory to kill these guys with.

Players taking matters into their own heads leads to Killing Dealing damage to blue militia, which in turn comes with severe standings penalties and ultimately the possibility of getting kicked out of FW in the first place.

Ways to avoid this involve:

Or, 4: exactly what you said, plus my proposal upthread to reduce the artificial restrictions on “legal” targets so players don’t get kicked out of FW.

None of those guys are cloaked?

Courtesy of a friend for getting this screenshot. 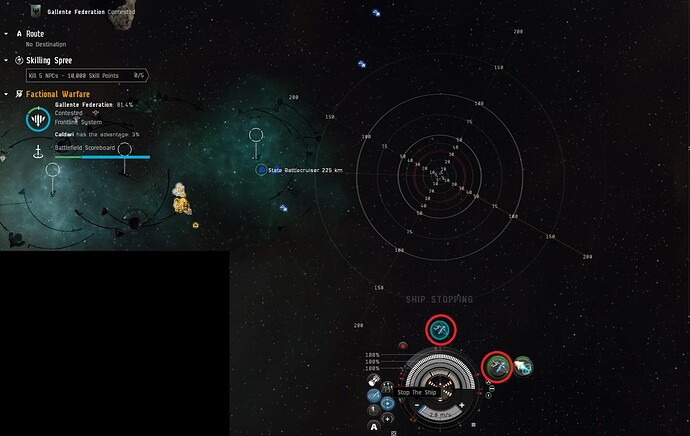 On a side note, apparently this is unintended and has already been reported a bug.

and how do we deal with those who show up and pretend to fight by orbiting a control point?

Although you were present at the capture of enemy site in Oicx, the following circumstances prevent you from qualifying for loyalty points for your effort:
Your ship was cloaked at the time.

Tried it out. Seems like the game already accounts for these people who are cloaked. Is this a non-issue?

Just… Decloak when the BF is seconds from being done… As every human being does when they’re exploiting this… I don’t know why you’re fighting this so much. It would take more effort to ignore that step and say “is this a non-issue?” than it would be to notice it.

CCP already confirmed this is unintentional behavior… And it’s been reported as a bug to them… I don’t know why you’re still replying.