sooo I was looking to producing some stuff for myself with my own mining/refining skills which are decent enough to make more from refining then selling the ore in a player refinery.

Soo why not get more into industry? more isk to be saved/made!

noticed all the BPC ships i am looking to use/make ammo (FOR THE AMARR EMPIRE!) are being sold for plex that cost more then just out right buying the product …

maybe I am just salty that scammers think they are funny controlling the entire BPC market of a given item?

but *i was specifically looking at Amarr ships/Battleships/Battlecrusiers this morning (like this morning there was only 4 BPC contracts that included a Abaddon, all for were being sold for 75 plex.

i believe Armageddon was the same thing

noticed all the BPC ships i am looking to use/make ammo (FOR THE AMARR EMPIRE!) are being sold for plex that cost more then just out right buying the product …

Being outrageously expensive or being a scam are two very different things.

if it’s outrageously expensive it is a scam because no one would buy it unless they misread it the price of 0 isk and ignore the fact it cost a plex worth more then the ship itself.

yeah thats over priced for a BPC . I get off work in 2 hours, i can ask around see if i can get you a copy of some amarr stuff

Still not a “scam” because it didn’t cost you anything to not buy it.

Just someone has an over inflated view of what their product is worth and you’re chose to buy it or not.

Is it to hard to scroll down or what? 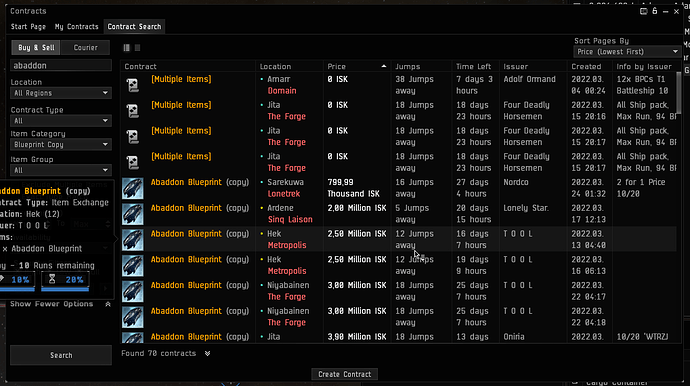 i was filtering by “WANT TO BUY” instead of ALL/WANT TO SELL…because I am, thinking I WANT TO BUY ■■■■… 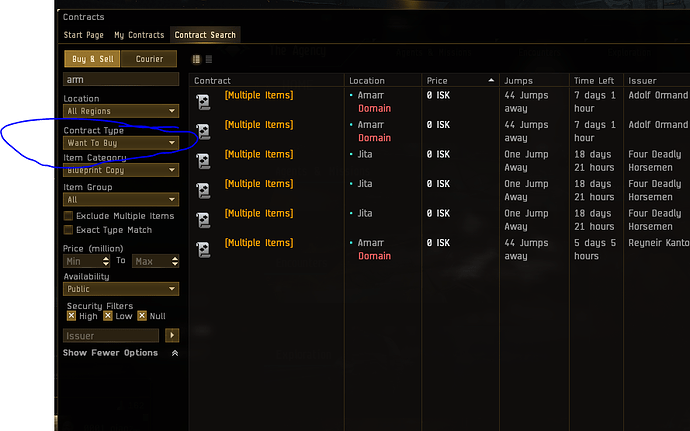 it was a lot more of a scam when 1 plex would take you an entire month, but it better showcases the long standing issues with the contract system that is currently in play, which is a large part of why almost nobody uses it to find stuff.

IMHO you are better off asking around in trade channels to find yourself a supplier for the BPCs you are interested in, as well as open convo with random folks in the Amarr militia if you are interested in their ships… might be able to work something out that benefits the bothes of yous.

Try the blueprint channel ingame, its an official channel so you can find it in the channel list

that channel is a waste of time. Never use such a dead channel.