I found this morning, on my ISK balance, a hole of about 100M. I got confused, and scrolled down the market operation thinking I was scammed on some transaction, like paying 100m instead of 1m.

I had only bought, before logging, a pair of booster for about 400K isk.

To my surprise, on my eyes popped this Broker’s fee transaction of more than 98M Isk, roughly the complete value of the sold loot from yesterday morning data/relic scouting.

I can’t uderstand where those ISK went, the transaction does not specify the involved item, I only know that most of the item were sold on a player station, not NPC. But I sold tens of items, not just one, shouldn’t each transaction in this case show a large fee, and not only one single Broker fee? I don’t know the dynamic of players station fees.

Is there any way to understand what this fee is related to? My fees usually apply 5% of the selling value, but I’m not trying to sell anything for that huge fee result. Any idea of how this applied is appreciated, I’m luring in the dark. 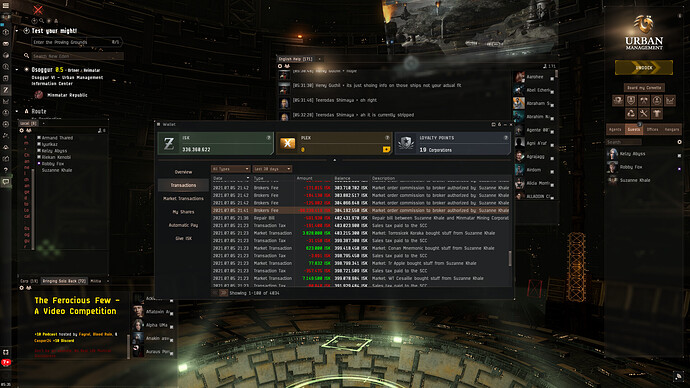 Yeah, I wish you could right click on entries in the transactions tab in order to get more info (i.e. Sell Order - Coreleum Small Armor Rep - Hek Boundless Creations).

Anyway, one of two things happened. Either someone jacked up their market taxes in the hopes of catching people unaware, or you accidentally added a zero or two to an order price (most likely option). If you did that to a sell order, there’s a high probability that the order is still there. So, check the Market Orders Window (Neocom → Finance → Market Orders) to see if any of your standing orders are listed at an absurd price.

Anyway, people have proposed various solutions to prevent typos from hurting people’s pocket books. I’m not sure how I feel about changing it though. What I will say is that I keep most of my money on a bank character (you can use an alpha), and then transfer over money as needed. That way the damage is minimized. Small mistakes might go through, but the bigger ones will cause the order to fail due to a lack of funds.

Thanks for the reply, if I find an order with wrong selling value, like 1.000.000 ISK instead of 10.000 for a large quantity of materials, does the fee get rembursed if the order is canceled?

Unfortunately, no. You might be able to petition CCP, however. Don’t know. Like, I once accidentally trashed some stuff instead of repackaging, and got it back. Of course, I seriously doubt that they’ll reimburse you for any isk that went to another player because of a typo, but they might reimburse you for the brokers fee, as that isk was destroyed in an isk sink. Thus, reimbursing you wouldn’t essentially create two copies of that isk. Hopefully that makes sense. Like CCP will replace a ship lost due to a DC, but will only restore the ship and modules that were destroyed. They will not restore what was contained in the loot drop. So, if you didn’t recover it, you’re SOL.

Thanks for clarifications, I sent a request to CCP and hope they will save my wallet.

Confirmed reimbursement by a GM after the submission of a ticket, with proper explanations.