CCP, why won’t you put an end to James 315 and Goonswarm and CODE. bullying everyone by RUINING the fun people have inside the game.

WHAT happened to the griefer button and all that goes with it? you are just enabling cyber bullying and as a long time player I am very, very dissappointed in you.

just like with Wardec’ing you need to make the mining in high sec a volunteer action or something to that effect, after working a 12 hour day I wanna be able to jump in game, have some fun and not worry about someone that can’t have fun unless they are making others miserable.

Congratulations, you just gave all them gankers a raging hardon by publicly whining about them.

Seriously. If you want them to stop, perhaps stop making this so damn satisfying for them?

no, how about they stop ruining fun for everyone. James 315 is a CULT leader. based on how everyone runs it? it might as well be the college Greek system, just a bunch of cults.

Starbuck, you have been running Abyssal Space based out of null sec, what is your problem about HS mining and CODE?

Exactly what are you trying to do, and in what way are you being harassed? You’ve dropped some names and made a very abstract complaint. Certainly griefing cyber bullying and harassment should not be tolerated, but I would need to know that it is actually taking place, and so far I haven’t heard of anything going on that would fit any of those descriptions.

WHAT happened to the griefer button and all that goes with it?

What was this griefer button and what did it do?

you are just enabling cyber bullying and as a long time player I am very, very dissappointed in you.

Come now, let’s not conflate a competitive video game you voluntarily play with real cyber bullying. This does a disservice to the real victims of bullying who can’t escape their tormentors by just logging off.

This whole post feels rather baity though so I’ll stop with the lecture. I was really just curious what this griefer button did. Did it look something like this?

Ok, that’s a coaster not a button, but you get the idea.

I’ve never heard of the griefer button, but I think you need to familiarize yourself with the “I consent to PvP” button. It looks like this:

Nobody bullied OP. A simple mining permit would have saved him all this trouble. God bless James 315 and his glorious Knights of the New Order.

Ganking, scamming, etc… have been a part of EVE for 15 years. It’s an intended part of the game, and no amount of special snowflakes whining about it in the past has changed that. You won’t be any different.

I’m not a ganker/scammer, and I personally think it’s a pretty low form of gameplay, but at the same time I don’t think there’s anything wrong with having it around. Quite the opposite, in fact, I like the fact that it’s possible. - If people want to play that way, they should be able to. I definitely don’t want CCP to be making a “child proof” zone somewhere in the game where people can act in absolute safety. It should be up to the player to protect themselves.

Luckily, ganking and scamming is pretty easy to avoid. Just got to learn the mechanics and use them to your advantage.

It’s a game about risk… Get over it

Well, I could complain about the ground outside. It’s dirty, has pointy stones and other sharp objects, it’s hot in summer and cold in winter. I could hurt my feet walking on it. But should I ask the government to cover it in bubble wrap? Or should I put on some shoes and check where I tread while walking?

so a Mining permit? Caldari state is who owns the space, NOT CODE…

shouldn’t the permit be gotten from them?

ignorant alliance that is probably at the lowest job they can get from the company they work for and want others to feel small by acting all big JUST LIKE A BULLY and online is CYBER meaning JAMES 315 and his cult of an alliance the other people who are TOO ignorant to know how to have fun without others being harrassed by at MINING PERMIT.

so a Mining permit? Caldari state is who owns the space, NOT CODE…

shouldn’t the permit be gotten from them?

You seem to be very confused. You can read all about the CODE. on the excellent website http://www.minerbumping.com/p/the-code.html. It is well known that the Caldari police - being NPCs and all - does not take any action against bots and other undesirables, so it is up to the players to make Highsec a safe, fun and CODE-compliant place for all.

It is a common myth that the Caldari state continues to exist. In fact, it was long ago replaced by automated bots, and the people voted in 2012 to elect a human being as their soverign leader. The chosen man was none other than James 315, the chief financial officer of Currin Trading, who has been much celebrated for his charitable philanthropic work with the miners.

If your mining ship was confiscated, please check to ensure that you have a valid mining permit. Of course, it is illegal to mine without a permit, because we cannot allow pirates to steal our scarce resources. You must register with the New Order Immigration Service, and let them know that you wish to engage in LEGAL mining.

James, of course, wishes all miners could mine to their heart’s content. However, we must carefully manage natural resources, preserving asteroids for future generations to enjoy. There is only so much ore available, and legitimate citizens of the New Order have a reasonable expectation that public safety officers will remove intruders from the belt.

There are a lot of ganker groups in new eden, who don’t make an effort to create lore related content like code.
As a miner of course, code is my arch enemy. But i appreciate the creativity of every pilot, who brings something interesting to new eden.

I run a high sec miner channel and permit holders are being seen as code related and get banned, if spotted.

THE PEOPLE DIDN"T VOTE, those who want to terrorize and bully people that thought like James 315 and HIS CULT voted.

So if it wasn’t 100% of eve voting, or high sec voting then don’t say things that make you look ignorant.

It’s stupid when about the only safe way to mine for FUN, not to make isk but just to have FUN is in an Orca cause everything else will have a CULT which, CCP needs to do something about, come in and DESTROY fun.

Yes sir, the shareholders voted unanimously to elect James 315. It is truly the greatest story ever told, and verily he was banned for the miner sins, but has arisen anew in Hek! You can read all about it on our award winning website: www.minerbumping.com

how does it feel to be a member of a CULT?

Are you in a mining cult? Do you believe that you need to mine, and that you should be safe and free to mine as much as you want? Are you addicted to ice? Have you started huffing gas? Do you feel like you are constantly grinding for isk, and that it will never end?

Don’t worry! Help is available! James 315 and the New Order is here to help get you back on the straight and narrow path. New Order agents are ready to assist you with your transition to a new and promising future! 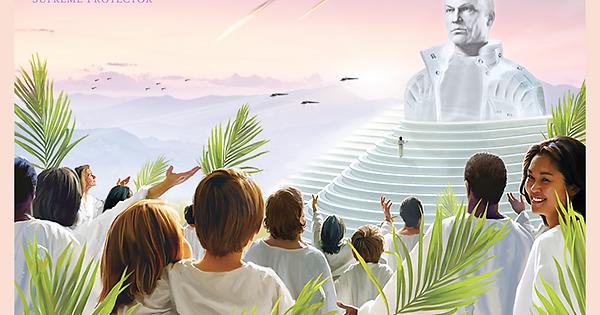 If you take but one small step toward James, he will cross the galaxy to embrace you!