I think a huge update is launching tomorrow.
why?

look at this,
This is the status monitor for Singularity: 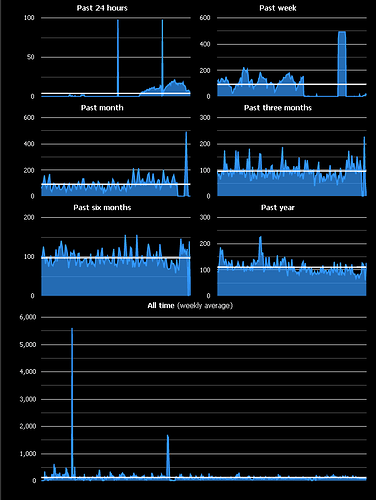 So whats so interresting about this?
well look at it:
The last few days the player amount on SISI was around 0-4 players on average.
but in the last 24 hours we 2 huge spikes that are both exactly 98 players big.
we ofc got the very huge spike last week wich was the mass test but thats not important rn.

There has also ben a spike of exactly 98 players

So also what i noticed SISI doesnt accept logins rn try it yourself it will say something along: server is currently not accepting players.

THis makes me speculate that CCP has something planned for tomorow.

I encourage discussion in this thread : ) but please stay constructive and dont call ppl stupid for their theory… well you can if their theorie is that where getting a cocomelon crossover or something like that.

THis makes me speculate that CCP has something planned for tomorow.

we need new weapons to blow stuff up with

Gal’s can develop a tastier quafe??? laced with abyssal drugs

Gal’s can develop a tastier quafe??? laced with abyssal drugs

lol, definitely something to hope for…

Why would they launch a HUGE update one day out without letting all players know about it?
The theory could be sound but - reasons?

lol, definitely something to hope for…

Maybe that spike of 98 players was CCP & alts…

Well, it’s possible but doubtful, especially on the test server.

Anyway, in the future please don’t misquote me, other forum members may think I actually said that.

Lol they anounced it xD

Who announced what, when and where?

Thanks for the link, any chance you could just list the Bullet Points?

P.S. I hope some more people join Caldari for the FW update we (Gallente) are kicking their ass too hard and they need some help.

how are Gallente kicking caldari butts? didn’t they lose both events before even they reached like 10% on the first event or something like that?

least The Amarr empire showed the duct tape warriors who is better…but they at least knew how to put up a fight and slow our lead down… but we all know exploding suns are fun!!!

Amarr/Mini event was much better tbh as you guys could gain progress with kills, we couldn’t. I don’t think many of us really cared about the mining event, shot like 3 miners got bored and did normal fw stuff.

I found when I killed the miners and their defenders all I got was caldari tokens, cant progress gallente event progress with caldari tokens so it was kinda bad design. 2 different ores for caldari and gallente as well so if you kill a caldari miner he drops caldari ore which you can’t hand in for gallente progress.

The first event left a bad taste so didn’t even bother with the 2nd, I’m sure if was a similiar experience for the other dudes.