At 6:40 CCP Rattati says he’s throwing wide nets on the forums to gather information. Where are these nets? I have not seen a single net thrown out on the forums that asked for feedback at all since Rattati took over. The #technology-research:upcoming-features-changes forum is devoid of any new content or feedback request topics.

At 8:00 CCP Rattati says that features go in Sisi for testing and some/many never make it to TQ due to outrage. Which features are those? The only example that I can think of are the Compression changes that were actively delayed. What other feature was not pushed to TQ despite the tons of negative feedback (see new Skill Window, events, balancing). The opposite feels more like it: Things don’t land on Sisi and then suddenly appear on TQ (see Marauder Bastion changes last year).

At 9:00 CCP Swift starts to ramble about how “certain player groups” received the Rorqual nerfs very unfavorably and wanted Prosperity to happen for them as well and how a few hundred Rorquals outmined the entire rest of the game. And then says “we can make a few tweaks” and how Rorquals scaling with n+1 isn’t healthy and how CCP develops in a data driven manner. That insight comes a tad bit late after CCP willfully ignored ALL that data for years despite player feedback and let the economy drive against a wall with seeing eyes. And to fix that, CCP wanted to nerf Rorquals in ways that make the ship itself completely unrewarding and turn it into a massive click-fest-tedium.

Somewhere after 12:00 CCP Swift and Rattati talk about how, for instance, Compression numbers on Sisi were blown out of proportion for testing purposes and would have never landed like this on TQ and would have been tweaked based on player feedback. This was never mentioned at all anywhere, to my knowledge, in any of the devblogs, forum responses, test server feedback topic. If CCP had clarified that CLEARLY and when they released these numbers, this would have prevented a lot of negative sentiments towards these changes.

At this point I should probably not continue… I skipped everything about NFT and Whovians because … well, waste of time.

At 1:35h a Wardec host talks about how destroyers in your fleet with defender missiles could be a counter against bombers to make BS work better against bombers. The thing with that is that, especially in Tidi, these defenders don’t work. And another thing is how defenders work. They don’t spread on different bombs, they all go to the same bomb unless you launch them in a slow, staggered way – but that limits the number of bombs that you can destroy and it makes it easy to just bring more bombers than you need to ignore those few defender missiles. The Wardec host goes on about lack of trust in players that these things are worthwhile … looking at the mechanics, who can blame them? The only reasonable way to make bombing harder is a hic.

At 1:39h some Marauder talk happens and Swift is superhappy with Marauders. Rattati says that Marauders are an aspirational goal and that they are were easy targets before … after CCP nerfed Marauders by nerfing the Bastion Module. Weird take, if you ask me.

I’m not your friend…

“in a positive and constructive manner.” - I accept the consequences.

Where are these nets?

Fish never see the net until its too late

I have not seen a single net thrown out on the forums that asked for feedback at all since Rattati took over.

Well, you can debate the extent to which they “listen,” but every patch is accompanied by a thread labeled “General Feedback”.

And I may have seen some evidence here or there that they’re listening to player feedback.

From Extraction To Production: Update Announcements

Dear Capsuleers, We thank you for the time you’ve spent exploring the changes and providing valuable feedback. We’ve spent this week listening to podcasts, reading forum posts and blogs, and interacting with Discord communities and so forth. It’s rare for us to update Sisi (and post a Dev Blog) this early in the process, but this is an important one and we wanted as many eyes on it as possible. We also want to thank the CSM for their input and help in shaping the plan, the details of which you…

Rattati said in a past interview that he would love to communicate more about these kinds of things that come to their minds and that they think might be a good idea, and that he’d love to see what the community thinks about these ideas or dreams or how they could actually work. But I don’t see that. All I ever only see are feedback requests for almost finished products.

This is deeply ironic for some of us.

If you truly want to “cover a lot of ground,” you should analyze EVE from its first few years, and try to understand what made that game so intrinsically good. The road to hell is paved with good intentions, and adding convoluted industry features every year and trying to manage the game like a data-driven mutual fund might not be the answers you’re looking for.

What makes games fun to play?

At 6:40 CCP Rattati says he’s throwing wide nets on the forums to gather information. Where are these nets?

This is a simple idea to get CCP access to a huge new income stream: Pay $25 dollars a month and you ignore all pvp in EVE. You can’t do damage or even bump any other player ships. They can’t interact with you. You can only engage in trade, PI, PvE, indy. CCP could be monetizing and creating monetary gatekeeping to avoid what I find the worst part about playing EVE: the playerbase. This isn’t a dig at particular ways of playing the game. I’m saying from my perspective, the pretty game about fl…

I’ve been somewhat enjoying the Dr Who event: the lore and art is great! But - part of the “grind” complaint about this and other seasonal Events comes from excessive, unnecessary clicks required to claim points for each Task/Challenge. PLEASE restore the automatic claiming of points - that the first iterations of the Event UI used, back in 2017.

• Automatic points claiming lets players focus on playing the GAME, instead of a constant “begging for attention” clickfest required by the user interface.

Special shout out to @CCP_Dragon for his 2017 work on Seasonal Events, and his active participation in the forums & responding to feedback, while he was iterating on Seasonal Event UX. It was a golden age.

• Automatic points claiming lets players focus on playing the GAME, instead of a constant “begging for attention” clickfest required by the user interface.

Oh god, yes. I would really like to know who in CCP actually thought for real that button clicking to claim rewards could ever be a good experience or make the experience better. If your server can’t handle reward tracking and confirmation, so won’t player be able to and on top of that they get a negative experience if they miss a button click or an important thing happening in space while they try to click a button.

Last time I checked there was not enough gas in jita to build 1 supercarier. Give the cost and complexity of these ships is a tweak not needed to bring these in more acceptable cost.
Iv been 2 months building 1 dreadnought. It’s a challenge but I feel these ships (caps) are just too expensive at the current price

r/Eve - The Sansha X-Type dilemma - A proposal for a new unique item.

Speaking of balance and improving gameplay. This topic raises some important issues on actual gameplay improvements. Sansha have been moved over to Shield tanking a while ago but their relic sites still drop armor salvage and their officer and faction pilots still drop armor modules. One could think that inconsistencies like these would have been fixed by now and that CCP would have used this opportunity of switching an established faction from one tank type to another to introduce some interesting new items … and by that no one means a Centus X-Type Shield Booster.

It’s painful, and maybe a little bit too painful atm — but, game design chose to make capitals harder to build, because players in deep nullsec alliances were effectively isk-printing them with Rorquals and basic minerals. CCP might reduce the amounts or M3 of certain materials (I like one suggestion to move to higher tier planetary items) but I don’t think the new challenge / complication is going away entirely.

Something positive for you, advice from another game studio that had to learn some lessons. 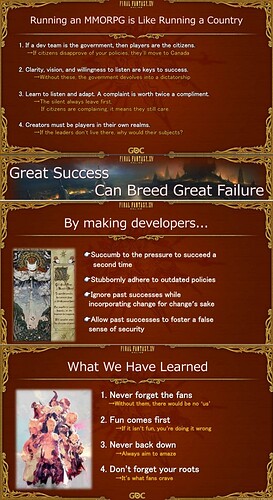 Just because one is not happy about changes doesn’t mean they’re not good or needed changes. The fact that CCP is willing to weather the storm and make decisions that are “short term bad” means that they’re willing to bleed for a better future.

You can all rage, mostly on sperg alts, at Rattati (who pretty much acts as a sin eater) in horrible ways (as carebears tend to do when crossed), but if CCP actively nerfed your play style or ship then you were part of the problem.

I didn’t listen to the full podcast (way too lengthy) but what I heard were some passionate folks doing what they feel is needed for the game, and that’s all I need to hear.

How responsible do you personally feel for causing the player count to drop by about 20% in direct response to your 2 years and counting of nerfing everything?

Do you think your reputation can ever be salvaged among veteran players who had to suffer under your reign?

When you buffed Marauders were you already planning on nerfing Bastion mode?

Did you purposely delay the Bastion mode nerf until after people had trained for and bought them in a kind of bait and switch tactic?

Or was it just yet another case of the developers not being able to anticipate the results of the changes they make?

I’m really enjoying EvE, and I hope CCP doesn’t listen too much to all the whiners and complainers - the game is doing great, it’s fun, and making things easy for crybabies is not the way to improve things.

Nobody is entitled to marauders, titans, rorquals, etc.

A difficult game is a FUN game.

A difficult game is a FUN game.

You live in HS and gank mining barges? Do you think that’s hard?

If it was easy, everyone would do it.

Highsec mining is easy - ganking Highsec miners is not easy.

Ganking is elite PvP. We have to do the same thing that people do in nullsec, except we can’t trap our target with bubbles, we can’t loiter in space, and our ship automatically explodes within seconds. It’s probably the most difficult activity in EvE.

All you do is grief new players mining in Ventures while being 100% protected by CONCORD, you sociopath griefing scumbag…