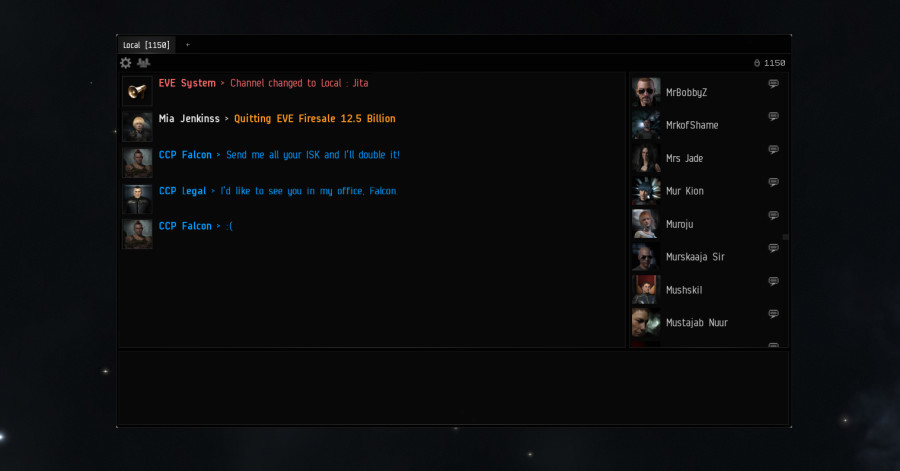 Check out this short news item for details about changes coming to the new Chat Bubble system tomorrow!

Good riddance. And no, CCP, please do not “look at player metrics and maybe re-implement it at a future date”. It was an unwanted “feature” from the start…

wow CCP, bat crazy shite in this line “with a view to re-introducing it in a future release.”

when crap is crap it cannot be anything but crap, so please, do not re-introduce the crap we all told you was crap anytime in the future.

let crap be crap and leave it at that.

I doubt any of the people in this thread were the target demographic of the chat bubble. As it say a in the first paragraph, it was a way to encourage new players to chat.

So is anyone here a new player? If not, you are barking up the wrong tree.

And honestly,if they bring it back with an option to disable it on one of the Esc menus, why stress? If it helps new players stay in the game and I can turn it off for me, fine by me.

Considering that they turn it off without having had a look at the metrics first as well as this 3 liner about the removal of the feature and no official feedback thread, I question the argument that this feature was used by anyone intentionally or had any positive effect on player retention.

How do you know they didn’t look at the metrics? They stated:

We’ll be taking a look at metrics from this test, and may potentially iterate on the system based on community feedback…

Speaks a completely different language. They have not looked at the metrics at all.

That said: I welcome the change. Now, can we eliminate the annoying “I have to type first until someone sees my private convo” thing, too.

CCP this part was good.

After significant testing of the new chat bubble system with the objective of measuring how it improved communication between new players, we have decided to disable them with a point release tomorrow, April 5th.

This part CCP is not necessary and completly unwanted. Please do not bring that damn chat bubble back!

We’ll be taking a look at metrics from this test, and may potentially iterate on the system based on community feedback, with a view to re-introducing it in a future release.

Excellent, completely pointless… lets hope it does not come back

Well, I’m not a computer programmer so I have no idea how much time and resources was invested into this. So let me get this straight, this was just recently implemented and now all of a sudden it’s being removed ?

Come on man, barring any unforeseen ill side effects, anything placed into the game should at least be allowed enough time to actually be acknowledged or rejected by the majority of the playerbase. Any decision to terminate or implement something should never be based on the opinions of a small sub-set of players that could be biased in one way or another. One thing is for sure, 30 people at a roundtable discussion group does not represent the majority of the playerbase.

In this game Information is King and Communication is it’s Queen. It takes two to tango and without one, the other is useless.

As for implementing conversation in the game, that option is available in the right-click menu. That information should be presented so that ‘New Players’ are easily made aware of it’s availability. I remember years ago there use to be helpful info ‘Tips’ scrolling at the bottom of the log in screen. Maybe something like that could be implemented into the game’s help menu.

About communication, the fact that players can set an ISK fee for convo probably does more harm than good. That game mechanic really needs to be removed. Players already have the option to accept or reject convo invites automatically in Esc menu. The fact that they can charge an outrageous fee for it is absurd. Basically when a ‘New Player’ tries to convo someone and get’s a message it’ll cost a large amount of ISK, they’re not going to do it, nor are they going to try and implement a convo with others because now that fee appears to be the normal cost for private communication.

Anyway, as for this topic content, where was the opinion survey on it? How come I never see any survey’s being issued for any new content being considered for implementation?

If I were CCP, I’d have just quietly removed it and left a little note somewhere here in forums. Whoever might have cared could have found it. “If you have a little miscue, don’t announce it, just let it quietly go away and be forgotten. When you succeed at doing something great, announce it to the world and whip up some enthusiasm!”
-Madison Avenue, corporations around the world, Il Duce Mussolini, about any other local community headman/boss. Or McDonald’s assistant manager.

Best news I’ve herd in a long time. And just in time. My plans to pester the devs with this issue at fanfest can now be retired

I play eve daily, I didnt even know about this thing. Nuff said.

Glad to see this is going, awful feature that cluttered up the interface and just wasn’t required at all.

Please don’t bring it back.

well lets look at it like this DMC, in it’s time in game i only had 2 people start a convo with me through clicking the bubble, both of them said oooopppss lol and closed the window.
it wasn’t in high sec and it wasn’t new players.

let’s have a look at the option to ignore and reject convos automatically. once done every gobshite that tries to start a convo and gets the rejection notice what do they do? they scream bot!

so you decide i’ll set an isk price that’s a little higher than normal to discourage random convo invites during say an important moment or operation cuz we all know there’s those that think convo spam is a weapon lol.

if there is one message they could punch out to the new people it’s RIGHT CLICK is your friend.

I’m going to say communication does take place between people in game a lot more than this bullshite would have you think, people have moved away from in game chat systems years ago, people are on Teamspeak or Discord and that’s where they chat, I’m not saying in game chat isn’t used, i’m just saying it’s not primary for a lot of people when it comes to chatting. here’s a crazy idea CCP, setup a Discord server for new players and invite them in there and fill the place with information. i’m sure there are plenty of volunteers to man it

i will admit that in game chat is still a first contact tool and is used for intel and so on, so just point out to the new people how to chat, i’m not convinced people aren’t chatting in game because they don’t know how. i’d say it’s more on the side of hey hop on this discord and that’s where chatting in game stops.

Man, I really hated that thing as it made me convo several people by misclick.