I have a small request if it’s possible. Could you please fix the game? (i get this multiple times per day) 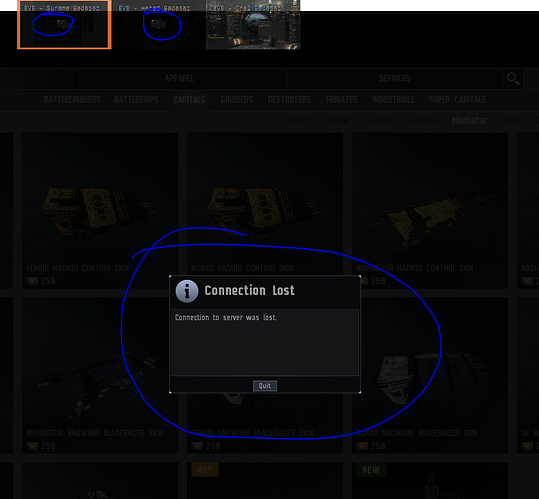 This isn’t CCP’s issue. It’s a network issue and depending on where in the World you are, there are a lot of points that could be causing this.

They just don’t want to fix their code. A game should be able to gracefully recover from a minor network issue. It’s not like you lost connection to ccp servers, its about disconnecting some clients while others stay connected, so obviously there is no network outage involved.

Then I did some research and came to this conclusion: Constant Disconnections From Live Server - Issues, Workarounds & Localization / General Issues - EVE Online Forums

So, at the end, my first statement stays…

No one said there was.

High latency to the point that the game disconnects you rather than just leaving your ship to potentially be destroyed, doesn’t require a network outage.

It’s not about latency. EVE was designed to work with dial up connections and can be played with one to this day (don’t ask me how I know). Also, I’ve been playing EVE for ages using 2G connection from my phone without issues. No single disconnect since start of the year. Server is 1s tick so unless your ping won’t exceed 1000 ms. There is no really ping related issues.

That being said. EVE is extremely sensitive on packet losses and general connection stability. And since only two out of three clients where DC. I suspect this is the cause.

I just hope CCP will fix this in the end.

Well, I don’t know enough about the technically side of things to have any idea whether or not it’s CCP’s fault. However, it would be really nice if stability improved. Fortunately, things will go well for weeks on end, but sometimes I’ll experience frequent DC’s over 2-5 days. And it will just be on or two clients at a time. Naturally, I’m rather curious as to why? What could cause one client to crash while the rest keep on chugging just fine?

No it is NOT a network issue in all cases - I’m a network engineer and I’ve lost connection and it was NOT an issue with my network, my isp or anything else local, I’ve checked it out when it happens.

I’ll go for days or weeks with no problem, then of a sudden it happens…several times in a day…

I’m a network engineer and I’ve lost connection and it was NOT an issue with my network, my isp or anything else local, I’ve checked it out when it happens.

Then you also know that things exist outside of your locality and that there can be a failure on something much further away which can cause this issue right?

You also know there is a limit to what you can actually test for on your end and that intermittent issues aren’t always easy to spot, not to mention any network issues that actually occur within the cluster itself that might only show up under extremely rare circumstances also making them extremely difficult to pin down and fix

I know this and i’m not even a network engineer, just saying

Naturally, I’m rather curious as to why? What could cause one client to crash while the rest keep on chugging just fine?

Connection stability. If it would be some general issue. All connections (clients) would drop. And remember that TQ is a cluster. Not a standard game server with single IP adres you can ping. At time of writing this, my EVE client has 10 connections going on to different addresses in Amazon AWS. At this point you have at least around 100 different “hops” and good knows what happens after Amazon.

Not a expert but maybe gave Idea that EVE connection is more complex than most games.

No it is NOT a network issue in all cases - I’m a network engineer and I’ve lost connection and it was NOT an issue with my network, my isp or anything else local, I’ve checked it out when it happens.

I’ll go for days or weeks with no problem, then of a sudden it happens…several times in a day…

Why does it only happen within eve then? I play other games, i dont get disconnects liek I do in eve, minimum 1 person session, often more. Sometimes 1 client will disconnect and the other stay open

Someone should actually test this and see what kind of packet loss is actually required before you get a disconnect.

Because most games you play these days isn’t relying on networking technology that was made to be used with a dial-up modem.

No, not someone, but ccp. We can’t see the network code and never will be able to do anything about it.
I already sent loads of logfiles with info about disconnects - even of disconnects of alts waiting in login screen while main was still working ok - feedback from ccp was ‘use a vpn’

feedback from ccp was ‘use a vpn’

Sounds like it was a routing issue, changing your network location is the only way you can affect that as backbones have set routes they follow through specific other network providers and CCP cannot change that, its the reason riot games basically had to form their own backbone in order to negotiate proper peering agreements so their traffic didn’t get screwed over as much, but that as you no doubt know is extremely expensive and not within the scope of something CCP would do, the VPN lets you connect via a different starting point so you’ll be able to attempt to avoid any problematic routes