Could you make the compact chat member list compact?

The compact chat member list of the Photon UI is less compact than it used to be in the old UI.

As a comparison, 14 people in space: 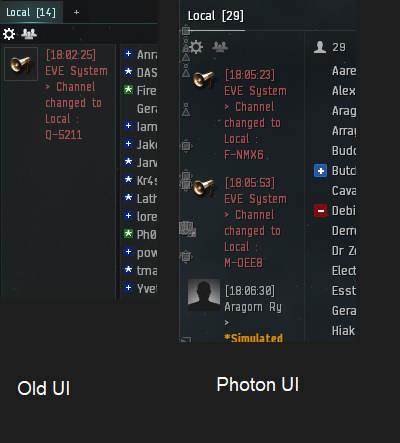 As you can see, the Photon UI is less compact than the old UI.

Could you please reduce the vertical spacing a little so that we have the same information density that we used to have in the chat window member list?

Back when Photon was first announced this used to be a problem in many places (for example d-scan, fleet window too) but I see you’ve tackled this issue in those places. Thanks for this, and for the added compact UI settings!

Separate issue, but could you please do something about the pixel alignment of these icons? The asymmetry is bugging me.

It is a dystopian future. It is good that the interface reflects that.

If the UI makes players incredibly frustrated with its inconsistencies (such as the upper-right min/max/close buttons being buried under menus on some screens), and we take out that frustration on other players: mission success?

It would also be nice to be able to put the list on the right or left side of the chat window.