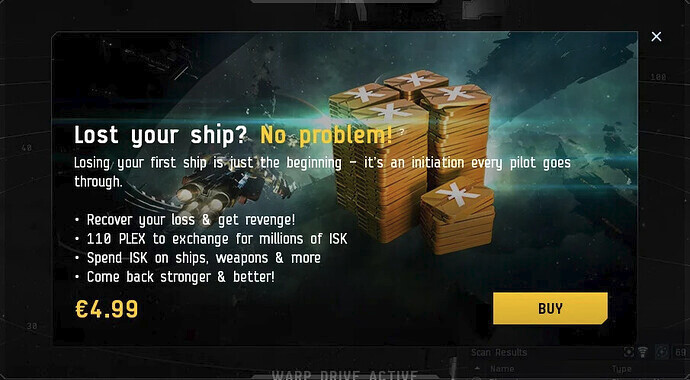 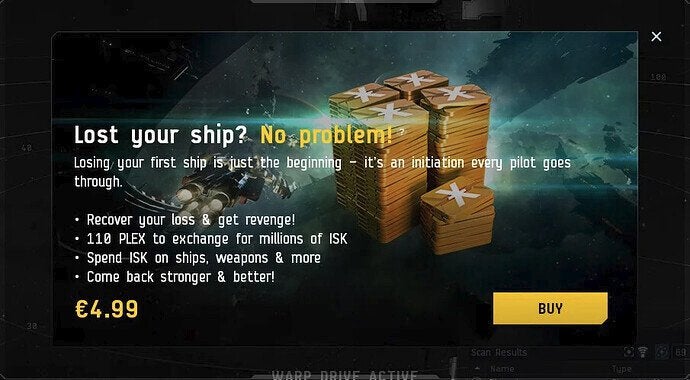 r/Eve - EVE should copy Warframe's business model instead of monetizing...

I feel bad for the new players they will end up hating eve and spreading really bad reviews of it when they spend half their salary in the first week.

So they’ll be exactly like most of the people that post here as well as almost every veteran player.

Always bitching and whining while threatening to leave the game real soon™.

The problem is that many of these new players will not do that. They will shrug and actually slide the credit card to get this pack because they are so accustomed and conditioned to this kind of predatory marketing from all the mobile games they usually play.

I play Warframe when I get frustrated with EVE or when I’m waiting for a skill I need to finish training. I really love that game!

i would love to have a skin from my allaince

O-o that is crazy

This is still not p2w though.

I like a idea of some Player crafted skins that are tradable or consumed on use and destroyed with the ship explosion.

They mentioned this I think FanFest 2016? but never followed through.

Player trading happens in every game. They could even host a service where they allow players to set the price of things and simply take like 8% after every transaction approves when paypal, etc. confirm a successful transaction. This way they make money from what people have already been doing instead of punishing them. Just punish actual botting but allow people who want to pt, pt. Except don’t make it lame like diablo did and you’ll be fine. Like allow 10 listings (free and no way to increase it) only for subbed accounts and let players trade. When a transaction goes through take a cut of the seller’s profit. Simple. Quite a few brokers and real estate agents do this.

You mentioned D3, so you must know why they shut down the real money auction house. When you introduce that mechanic into a game, you are opening a can of very litigious worms.

Yea, but if they did it just right it’d pay itself off simply because of player activity.

More power to the players! Let us make our own SKINs!

They mentioned this I think FanFest 2016? but never followed through.

At one time they did show a prototype of players being able to pick colors and customize. Maybe even have “dye” that was player made, etc. Then they instead came out with skins in the rendition they are today and turned them into another revenue stream.