I’m currently playing EVE on a Laptop and I’m not too thrilled with the performance – I have to set all the graphics options to their lowest values to get decent 50-60 FPS (using Proton 5.x). The machine I’m using has a fast CPU (i7-7820HQ) but only a built-in Intel GPU (HD 630).

My other machine has a much older CPU and a stand-alone graphics card (some Radeon) but performs much worse. I think the Radeon should be a bit faster than the Intel GPU but in that case the CPU is probably just too slow.

So I guess what I’m wondering is, are there people who can play EVE on Linux with decent graphics settings and reasonable (50+) FPS and, if so, what kind of CPU/GPU are you using?

In general I notice that CPU seems to be a performance bottle neck for my EVE. This is especially the case, when the EVE process hits the 3.x GByte main memory consumption. This is regardless that there are still several Gigabyte of main memory free on my machine. My assumption is that at some point the EVE process starts doing some memory garbage collection which seem to take a lot of CPU.

As I have a good 3D Card in my computer reducing visualization quality only helps a bit, which is another indicator that is a CPU issue.

By the way this really appeared just 2 years ago… around the time when CCP dropped 32 Bit support. Maybe at this point they stopped developing with memory restrictions in mind which is now leading to this annoyance.

I am running top of the line GPU & CPU, as well as more than enough RAM since I am playing on my workstation, but even that doesn’t help as eve is heavily CPU bound. It seems like eve is almost entirely running on a single core, so a higher base frequency of your CPU will be more help compared to more cores, better GPU or more RAM.

I can run eve at stable 100+ fps on 3.8k*1.4k resolution with up to a dozen clients running on dx12 - but only if they are docked… as soon as at least one of them undocks, the fps drops drastically and becomes extremely unstable. Even running a single client drops to below 20fps as soon as fleet fights start or randomly when warping around gates. When doing abyssals, pve anoms, exploration, etc. the fps stays stable at 100+, but everything else fluctuates extremely.
RAM usage also is through the roof sometimes, as no matter how much RAM eve needs, it doesnt hit a limit.

I am running openSUSE Tumbleweed on newest versions across the board.

These are some screens I took maybe a month ago 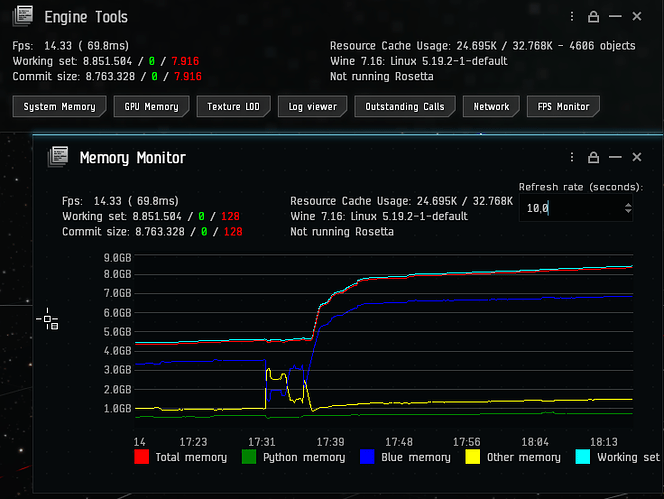 Small update from my side: As Ubuntu after a usual update simply refused to continue to work with my Nvidia Driver (I really tried a lot to solve the issue) I decided that it is time for a new distribution after being over 10 years on Ubuntu.

So I just finished my Manjaro installation and it is really impressive, not only EVE was really easy to install with Lutris, the performance on the same machine also significantly increased. First observations indicate that the Frame per Second Rate almost doubled in CPU intensive situations (e.g. around stations it was ~15 FPS, now it is up to 30 FPS)… I can’t believe it myself.

However, I need to do a longer gaming session for verification, once I am done with other migration stuff.

Thank you all for the detailed responses. I took your advice and upgraded my distribution, that did make a huge difference and EVE is almost playable now - good enough for my PvE needs, not quite there for PvP though.

Small update from my side… I have now installed Steam and my Manjaro… and now running EVE Online over steam. I have now idea what the Steam guys are doing but now 60 FPS with max. Graphic Settings (except AMF FSR) on Direct X11 are the norm. WTF!
I mean I still see the CPU being a bottle neck once new ships come or go to the scene, but when on grid, it is beautiful and fast… almost like magic!