We all know we want custom skins in eve online, and you cant deny that. It has been a HUGE request from players since the inception of skins within the game. At the current moment, I have personally spoken with members of the CSM, some of CCP in the art team, and with Caldari Prime (the guy with all the custom skins on reddit). According to some, they don’t know why CCP isn’t just doing this money printing idea. Some have the notion that with current CCP tech its not possible. Others have said that its perfectly possible, but upper management in the company sees no reason to do this (IE: “is it worth dedicating dev time to this?”). So in an effort to show the interest in the topic, I thought it would be a good idea to shove some graphs in front of them. Which/what of these ideas do you think would work? How much money are you willing to put into custom skins? and plainly, how many are interested in features like this?

So this one is a bit of a weird but cool idea, most people think this idea would work like the Steam workshop for those who cant read as to how this works, long story short players can create items/skins/maps etc for various games and submit them, other players can download and crustomly use these things on a local server. They can upvote/downvote these things as well. Every few months some devs will scroll through the top voted things, and implement them into the full game, while giving massive credit to the author.

So this idea would give players of Eve the tools required to create their own custom skins/cosmetics, and similarly vote/downvote ones that should be added to the NES, 90% of this is currently possible within the games physics and engine, the only possible difficulties with this idea would be possible obscene skins, which is easily solved by filtering out/banning those types of people. As well the legality of crediting/paying the artists a portion of the profits, the legality aspect of this, I’m confident that CCP could make such a policy as if any submitted work is owned by them etc. As well the difficulty of making a tool available to the public.

This idea would restrict custom skins away from player made/player voted and more of a “tribute” system of CCP making skins based on major alliances that have made an impact, plus content creator “sponsorship” skins, similar to other huge twitch streamers getting their own custom skin line in popular games. This would be relatively easy in eve, although be it, take time away from actual game development… The huge downside to this is of course dev time and effort, as well as maybe some legality issues as to weather alliances/creators should get a portion of profits. As with method one, the legality of this could be easily solved by CCP claiming all this property is owned by them and signed off by creators that CCP owns this work.

So there you have it, the 2 biggest ideas around, when it comes to pitching an idea to management, what’s the next thing we need? GRAPHS! Yup thats right, and I have created a google form that will be spread throughout the land as to giving CCP as much data as possible to this idea we all crave, so if it wont take too much of your time, fill it out, the bigger data we get, the better argument we can make to CCP about just how much we really want this. If I have missed anything in this thread, or you would like to add, feel free to comment below with your thoughts. 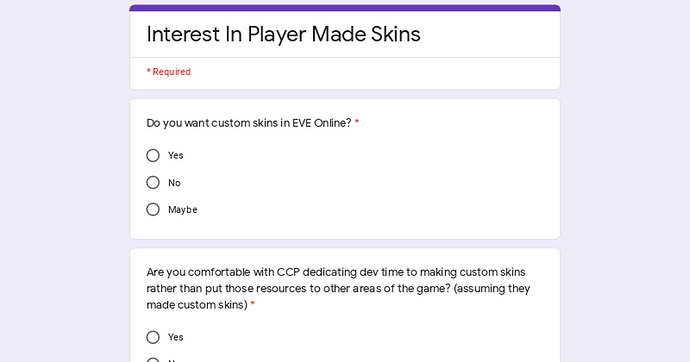 Interest In Player Made Skins

No. We don’t all want that.

I’d love it but I also see huge potential for abuse LOL.

All I want is some anime girls on my ships.