I would like to see CCP change the design of the Customs Office which orbit planets, the current design does not look like a space station and i really think it need re-designing!

I would like to see something that resembles a small space station which you can dock at and get your cargo from your PI (no inside shot) with moving parts. 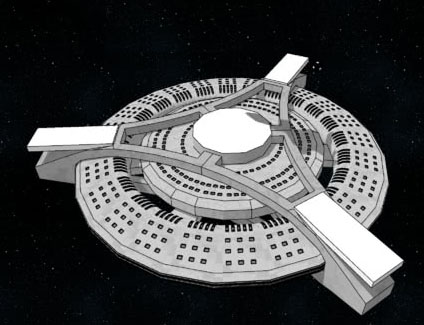 However docking there is going to be a no go for me, otherwise it’ll remove even more Risk from PI. you already have no way to go after someones infrastructure, and people would just make off-grid instant undocks from these so they could warp, dock, and warp right back out without ever being vulnerable (Especially blockade runners).

Only exception to that being in null and W-space where a dictor could stop them, but then theyd just sit inside until they left.

I agree
redesign would be nice
docking option not
First, it 's not necassary: I do some PI myself for some years now and I never ever had someone on grid when collecting my PIstuff. (this is not an invitation to do so

) local (of not blacked out) intel and dscan can give enough info to travel safe.
Second, docking would take more time than landing, hitting warp to next CO and loading my stuff (in that order)

they do look like giant vacuum cleaners in space

When CCP Yttrbhim (messed that spelling up) first introduced the concept of Citadels, the idea of Astrahus replacing POCO’s with a Market Hub on them was the idea.

The only thing was CCP might have to place a limit of 1 Astrahus per planet…otherwise we could see everyone putting their own Citadels there.

To me it looks like gigantic cargohold with launcher pad largely autonomous.
Its perfectly fitting.