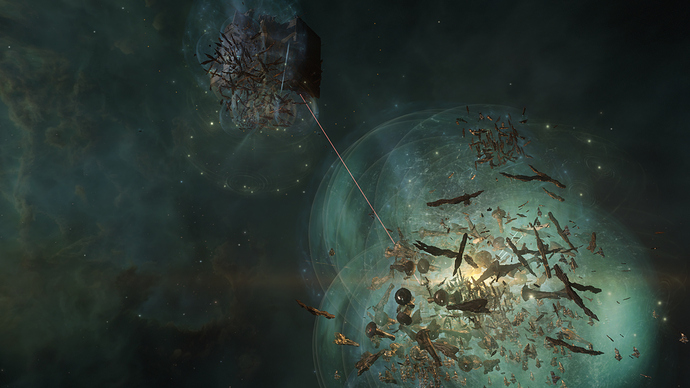 Since the start of 2018 there have been a number of issues that have caused unexpected downtime and performance issues with Tranquility. This dev blog covers a bit of a timeline of the problems, as well as giving a little detail on next steps for their resolution.

Read all about it here.

I’m not sure how to interpret this line correctly:
“Pilots will find that every character on accounts that were considered active on March 20th, 2018 (the date of the March release and the subsequent extended downtime), have been issued with a gift of 250,000 skillpoints.”

In either case, I have 2 accounts that had characters logged in during march, and were actively omega, that did not seem to get any skill points in the gift, any idea why? I don’t want to publicly state the toons here.

Just a few questions regarding the chat system’s status quo:

Good to see you got rule #1 down: Never not blame DDoS attacks!

Good to know you are actually still thinking about this, though.

I’m still hopeful the database script for the SP gift is still running and it’s just long-tailing based off of activity.

Will people that have gone through the many issues since april of this year receive any compensation, or will it be strictly for those regarding the issue on march 20th?

A thing I just noticed:

While it doesn’t tackle the issue of load on a single node during a large-scale engagement, it allows us to assign other systems elsewhere and give these fights a little more horsepower and breathing room.

This sounds to me like fights such as UALX-3 happen on normal Sol Nodes that run other systems as well. This begs the question @CCP_Falcon : What happened to Mahālangūr Himāl?

If I remember correctly, if there was a big fight coming up (and a keepstar timer in Nullsec at least has the potential to become a big fight) the system used to get mapped to an Everest node ahead of time to mitigate at least some of the soul-crushing lag. Is that not a thing anymore?

If it really isn’t, could you provide any insight as to why that is?

Thank you for the skill points.

WOW! Must be active 5 months ago in order to receive skill points when problems are still on going……………

@CCP_Falcon Another thought just crossed my mind: Why did you pick those low-frequency processors? From what I understand about how TQ works, wouldn’t a Xeon Gold 6144 be better suited than a Xeon Gold 6134 or two Xeon Gold 5122, simply due to the significantly higher boost clock? Wouldn’t even a Core i9 7900X work better than any Xeon for this task, or would that be too unstable?

I resubbed my accounts right around that date, so I got the skillpoints on 2 characters on 2 separate accounts. I did not get it on the rest of the accounts(probably because I activated them in the start of april) nor did I get it on the other characters on the accounts that were active. So, this has been an ongoing issue since march, and I feel a bit left out on the other accounts.

Please adjust the criteria for the sp gift to include all that have struggled with interruptions to the service all summer,

@CCP_Falcon I can see why they hired you, good writing as usual.

Can you tell us wether Alpha pilots also got the SP gift?

edit: seems that only part of my Accounts got SP gits

I’ve noticed something strange though. I have 2 accounts where I recently biomassed a couple of characters. The other characters on the account were active over the period mentioned above but they haven’t been given their 250k SPs.

@CCP_Falcon I have a question. When do you think it’s feasible for CCP to take the time to re-code the servers? There’s more and more grumblings surrounding the server issues than there are regarding ship balancing, and the issues only get worse every time CCP releases something or updates graphics. I truly think we’re starting to approach Incarna-level dissatisfaction regarding CCP’s efforts, or lack thereof, and the server. Adding more hardware and a new SQL thing is using a bandage to fix a severed limb.

When this issue was last raised and a threadnaut created, CCP claimed that it’d take two years to re-code the server properly. When, if ever, is this going to happen?

I’ve noticed something strange though. I have 2 accounts where I recently biomassed a couple of characters. The other characters on the account were active over the period mentioned above but they haven’t been given their 250k SPs.

Maybe the script is still running or something. Only a couple of my Omega accounts got the SP.

A few characters are missing the SP gift, we’re currently efforting this and it’ll be taken care of by the end of today

Maybe the script is still running or something. Only a couple of my Omega accounts got the SP.

It could well be something like, I’m fine with waiting and seeing.

My other active chars seem to have their points, just not the ones from the 2 accounts where I’ve bio-massed a char so I may be jumping to conclusions or I might not be, we shall see

Pilots will find that every character on accounts that were
considered active on March 20th, 2018 (the date of the March release and
the subsequent extended downtime), have been issued with a gift of
250,000 skillpoints.(For reference, we define “active” as accounts that have logged in during the 30 days prior to a given date.)

Does that mean if I had an Omega account with alts on it, that these should get the SP as well?

Btw thanks for this quite substantial compensation. We didn’t really earn it for all the raging, but it’s appreciated

I came back to the game and started this account on Feb. 27th, Sooo that means I get nothing just because of 7 days?.. um … sad feelings