DirectX 12 not detected by Launcher

The launcher doesn’t seem to notice that my GeForce 860M has DX12 capabilities.
I thought it’s because I have a discrete GPU but both Intel embedded and GeForce are DX12 capable 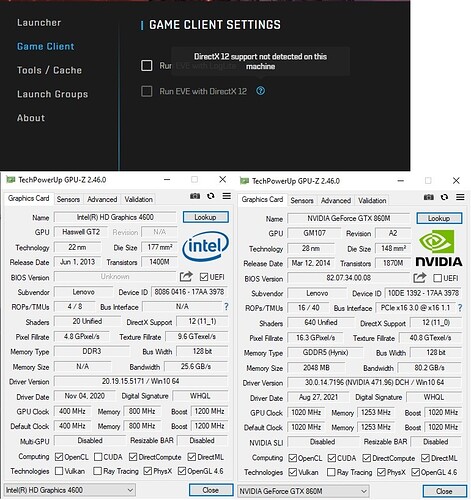 Use dxdiag to confirm but it says that “feature level” is 11_1 and 11_0 respectively. But during mass test CCP said that you need at lest 12_1

Hey! We are planning a mass test on Singularity on Thursday, June 9th, at 17:00 UTC (= EVE time)! What exactly is being tested? Several graphical changes, as announced in Building the foundations for an evolved EVE experience | EVE Online DirectX 12 - only available on GPUs, which support DirectX feature level 12_0 (normally supported by new cards since 2015 - dxdiag.exe shows the supported feature levels on the display tab). DirectX 12 will be switchable in the launcher, as soon as enabled…

Feature levels in Direct3D define strict sets of features required by certain versions of the Direct3D API and runtime, as well as additional optional feature levels available within the same API version. Feature levels encapsulate hardware-specific capabilities that exist on top of common mandatory requirements and features in a particular version of the API. The levels are grouped in strict supersets of each other, so each higher level includes all features required on every lower level. Som...

I see. Thank you.