Are you meaning he should place his fitted ships inside a can? Or suggesting he leave a can with a special name in the same station as it’s matching ship, and find the ship by searching the can he knows is stored with it?

Let me know if raising a post/issue will help.

they really shouldn’t. they are just normal players that have volunteered to help the should in no way have the ability to tell who is an alt of who

they really shouldn’t. they are just normal players that have volunteered to help the should in no way have the ability to tell who is an alt of who

Most forums have it. And these forums are the worst I’ve seen in 20 years of gaming and there’s no reason they should be. Eve is full of intelligent, decent players discussing the problems and solutions to them in game. Just yesterday, 8 ships/players tried to gatecamp my cloaked hauler. Still had a conversation about how Eve fails to cater to the only kind of PvP that’s any fun ie small gang/solo.
These conversations happen everywhere but in this forum.

Someone posting the same BS with their alt makes it appear more legitimate – when it isn’t at all. It’s a well-known psychological effect, Asch Conformity, that makes 75% of people support obvious nonsense.

Firstly, don’t post with alts you want to keep secret then. Literally no need to.

Not always. See link for details:

Doesn’t say. Would be amazed if CCP didn’t have to pay people to deal with the liar/trollfest which these forums are but if so:

And I can’t bind Make Active as a key at all.

it’s alt+n and alt+g and both are configurable

Ah, there’s also an Inventory window which is Alt-C.

Don’t suppose you can find me a hidden setting for Make Active?

Basically means “Jump into Ship” or “Move pod into this ship”.

It’s the option you have to select in the right-click menu to get in a ship. Unless I’ve been doing it the hard way for years.

Only works in the right-hand window pane, where I am seemingly stuck with tiny pictures of ships instead of the easily-identifiable name for it.

So we’re back to the ship-naming problem again. Most of my ships have names to deter gankers and it makes sense to have them mostly be the same name… not least that it doesn’t look alien to my corp.

where I am seemingly stuck with tiny pictures of ships instead of the easily-identifiable name for it.

you know you can change that to be full icons or a pure list with no icons or names and small icons right?

What I can’t get is the actual ship model (Maelstrom, Astero etc) in the right hand pane.

It’s in the left hand pane but if you double click, it merely drops down the drone bay et al.

that’s because the left had is just inventory navigation. set the actual items(ships) to appear as a list and you should be fine with what you want 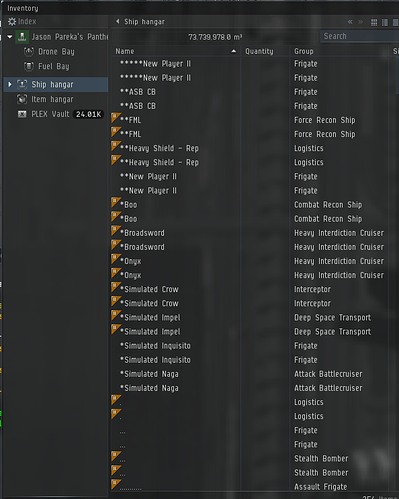 Definitely not fine. I cannot get anything in the right hand pane other than a small (or very small) mostly unidentifiable picture of the ships. It probably doesn’t help that I mostly fly Minmatar ships, so they have this distracting crimson background.

So I’m forced to use Alt n (or whatever), identify my desired ship in the left pane, right click it and select Active Ship.

That’s 4 clicks and 2 tiny-text menus to navigate, just to get in a ship.

Your Broadswords are called “*Broadsword” ie it’s named after the model of ship.

But I’m seeing frigates called New Player II, ASB CB etc. Maybe you know what that means. But it’s seemingly impossible to get Eve to show what type of frigate they are.