I am so scared, what should I do? Well, besides not logging in the DZC toons (outside of PI and research/prouction and playing on non-DZC corp toons.

You forgot:
-don’t care about it

Yea or do like a lot of other highsec corps…quit playing for a month and cry on forums about how “highsec war decs are broken”…I mean there’s always that.

Just move to Null sec, it’s much safer than HS

Life in the blue donut is pretty safe…or so I’ve heard. Sounds boring to me though.

“Wardec is broken” rants are only allowed when accompanied with zkillboard links.

Take a exploration ship out for a spin in low sec

Use this as an opportunity to learn how to use instant dock, instant undock, how to avoid getting dunked… cause at the end of the day there will come time when you get wardecced.

Awesome! Some people forgot about that. I blame the warp to 0 and not my horrible memory.

Lots of other great hints too! Keep it coming and one day someone will write a book called “EVE Online forums, and how I learned to love (and handle) the high sec dangers!” Written by Miner and Hauler.

Who tf is DZC?

Some corp in EVE Online. They are weird people. 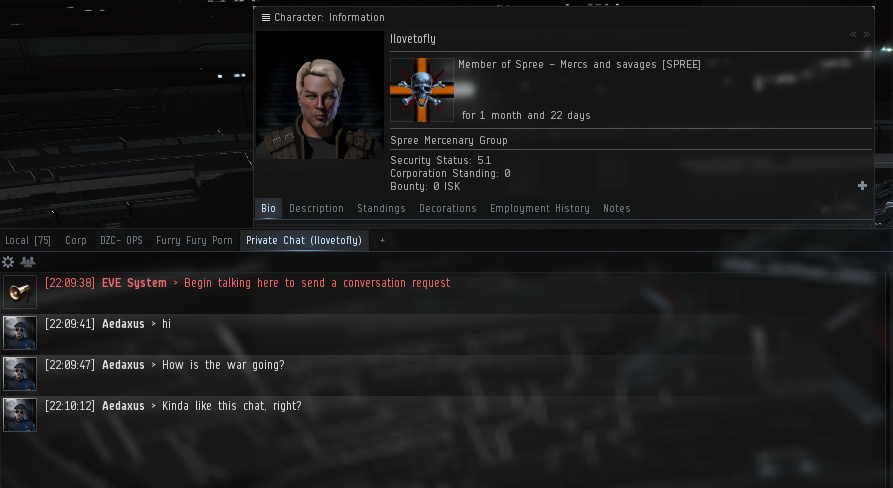 Yea… you gonna remained decced throughout your eve career

Yea… you gonna remained decced throughout your eve career

Don’t worry, English is not my first language either. And if you are that guy outside the station, take your time to write a post, I’ll be undocking around next week if the wardec is over. I have been here from 2006, I don’t mind wardecs, I mind random wardeccing. I can take a break and play on alts for a week, month, year… I just like to PVE and mine salt from people like you who don’t really know how to play the game.
I want an incentive to PVP, if not, I’ll just not give PVP content back, I hope you… eh… your ‘friend’ enjoys hanging outside the station for hours, days, weeks while I set up queues and hop on my alt to haul stuff around and watch netflix. That’s awesome PVP. I am enjoying the game, at least you aren’t stuck pressing ‘up’ and ‘enter’ for days on end in Jita local.

A friend of mine told me he saw you when he was hauling stuff;

This is some dank forum PVP…

PS: We’ll really stop leaving the station now, because “you guys” are like “mercs and savages”…

In before you get CODE enforced without the polite war dec.

“without the polite war dec.”

I don’t mind code. They are space pirates(see movie ‘The ice pirates’), a risk everyone has to deal with and they have great lore are realistic as content and are mostly fun guys even when they wreck my awesome ships that were full of valuables and lacked defense or active control (afk autopilot).