So what’s up with these things? I was away when this content was released, I’ve noticed the books can be quite expensive, especially the Vorton Specialization books. I’m curious to try one of these out so I have injected some books in order to fly it. I had seen that there are no EDENCOM Cruiser Skillbooks for sale in Jita which is kind of crazy, what’s up with that? Are these things super rare or something?

Some of them you can buy through the “remote skill book purchase” feature in the training screen. Just add a skill you don’t yet have to your queue, and it will quote a price. For normal skills, there’s a 30% markup over NPC prices.

Also… until CCP removed the ability of Suspects to just get aggression by being around because of the arc damage spread people will just not use it.

I have so many use cases for fleet use I want to do but I cannot because that one thing makes it all fall apart.

Yeah. If the safety button is green. It should just attack the red and the yellow blinkers but gankers will not be Happy with that.

Well it wont benefit me at all since I do that as well.

But the amount of times you actually see a Thunderchild doing mission is like seeing Hen Teeth. And I would like to use the ship. And you are right, Having to go yellow to apply damage to yellow sounds like a plan.

But that is CCP to sort out and decide on :). @CCP_Aurora Safe us, you are our only hope.

You guys make me laugh.

It’s amazing to see the two latest ship lines from CCP have such divergent success in usefulness. Both ship lines look great, but while the Triglavian line introduced a new weapon system that encouraged new tactics and use, the EDENCOM ship line seems to be put together haphazardly in regards to weapon abilities and stats. That they were considered to be a reward for one side in the Trig/EDENCOM war just added insult to injury to those players who chose to actively support the empires. To promote their use and to justify their cost/value, CCP needs to rework the weapon line, skill use, and book drop.

EDENCOM ships, like EDENCOM standings, are only good for one thing - letting CCP laugh at their players.

all skills except the (s/m/l) vortron specialization is in the skill tree able to be bought without using the market.
These ships are a mission runners wet dream. (Kill 5 NPCs at once?! 5x bounties!?) But there are a couple of snags with them.

the endcom ships are not cheap enough yet. And the people that buy them arent pvping regularly yet. you will see them after the update that halves the values to produce them. they are logi nightmare.

I dont even like how battleship looks tho. Apart from all the things tied to the mechanics of that zappy gun system…

I mean, why it always gets so low damage when there is only one target?

Supposed to be usefull only agains blobs of subcapitals in null sec?
That reminds me, CCP wanted to make blobs less viable, and they first wanted to design bombs of some kind, but looks like they actually changed it to a zappy thing and tied it to a hull of new ships, making it less universal, and maybe in hope thay will somehow make it a success. But that gun is so situation specific that it doesnt justify a new hull to buy each time you want to use it. It is just not right…

Also… until CCP removed the ability of Suspects to just get aggression by being around because of the arc damage spread people will just not use it.

This sounds like a regional issue to me. People won’t use ECM bursts, bombs, bubbles or capital ships either in high sec due to it being impractical or not allowed, but that’s not a ship or module issue. I see no problems with it if these ships are impractical in one specific region sec due to high sec rules.

I do see problems with these ships when they have no practical use in general. And it looks like EDENCOM ships are impractical in general.

In low/null/wh these ships are not an issue. But an entire fleet of them (Costs aside) will have logi wings spin around not knowing wtf todo or whom to rep. They will be able to mitigate the incoming dps by launching drones until the drones are dead and random arc damage focus on ships again. But that wil get rid of a logi ball so fast or make them useless.

But you are correct. Nobody really cares about these ships but I would love if CCP just fixed that one aspect for me as I have an immediate use case for them with 40-50 other people once I don’t have to worry about suspects.

But that is just my wish. I do like the look of these ships, I just wish I could actually use them.

Some of them you can buy through the “remote skill book purchase” feature in the training screen. Just add a skill you don’t yet have to your queue, and it will quote a price. For normal skills, there’s a 30% markup over NPC prices.

I would do this but the option isn’t there! Would it matter what region I’m in? There is no orders in Jita. I think the more advanced books are not available like that so I am assuming you can only find these books in sites or maybe there was a limited run. I did take the plunge on the Small Vorton Specialization book

It was an excessive purchase lol

I would do this but the option isn’t there! Would it matter what region I’m in? There is no orders in Jita. I think the more advanced books are not available like that so I am assuming you can only find these books in sites or maybe there was a limited run. I did take the plunge on the Small Vorton Specialization book

It was an excessive purchase lol 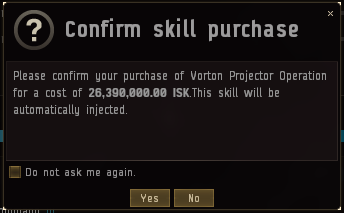 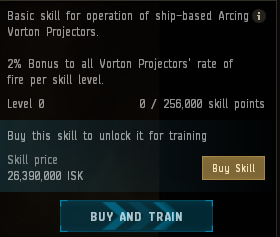 For these weapons you can buy them directly from your skill menu no matter where you are.

As long as you have the isk to do so.

It does exactly this but some people are upset when they get shot back.

The issue with chain shot weapons in MMO’'s is that they are hard countered by a super tank espicially if regeneration is a game mechanic & in eve it is.

Ie, you might not be able to save all those chain Shotted but by keeping 1 tank live you nullify by that fraction, multiplied by applied regain.

Unless you are in a fleet of 5 and your only target is a gatecamp or lvl IV mission they are literally worthless.

The perfect counter to a remote-repping army with repairs that grow stronger the longer you repair one target is to have a weapon that spreads damage across all enemies, forcing the trig-logi to perform sub-optimally.

EDENCOM weapons are also theoretically a nice new option in fleet fights that could apply more damage to an enemy fleet (and thus more pressure on logi) than other weapon systems, even though it deals less damage to a single target. You may not be trying to alpha the enemy ships off the field, but the total dps the enemy fleet should repair is bigger than if you’re just flying single target dps ships. Or so it should be…

Too bad the ships and weapons are bad and way too expensive, and that nobody bothers to train the ships as a result.

CCP dreams are made of these…