It seems that EVE got a new update. It’s evolved… And we now have an overhauled career path. I see we now receive ISK rewards for various activities. “Soldier of Fortune” seems to suit me. What are your thoughts on the new update? 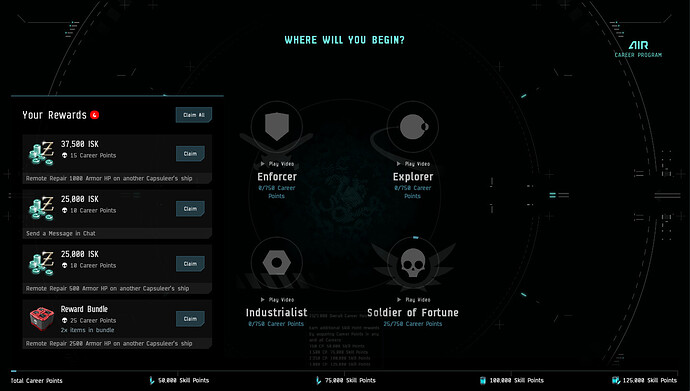 For the first time CCP delivered something I consider professional grade.

I hope this is the new default.

Enforcer is cakewalk, hold my beer.

Well, after seeing what they’ve been doing with the NPE, I’m somewhat pessimistic. They have literally taught players things that were wrong, and seemed way more interesting in trying to hook players with a themepark style experience that wasn’t reflective of the actual game, than they were of actually teaching newbros what they need to know in order to have fun and success in this game.

And, I’m not just talking about basic mechanics. Don’t get me wrong, that’s definitely stuff that should be taught. But I’m starting to think that it might also be important to teach players other stuff as well. For example:

Am I wrong here? It’s funny, the first few comments in the official dev thread about it focus on the extrinsic rewards. And, I’m just like, am I the crazy one here?

The isk reward is laughable low in the New AIR Career Program. If this is geared towards new player, newer player need isk! 63,500 isk per task is a JOKE! There is no reason that tasks are not paying newbros 1M isk. So 4-5 tasks and they can replace a lost frigate or destroyer. Also the SP is serious low. Newbros need more SP rewards. Nothing like telling newbros on comms, that months of training is required to do everything. I had a guy asking about training/flying titans. I laughed! Told him …

Anyway, I’ll check it out later. Hopefully, they at least got the basic mechanics stuff right (i.e. chose to focus on more useful stuff and it’s factually correct).

I think two points escaped your vision:
1 - You don’t teach sandbox to people, you teach the basics and let they figure the rest out;
2 - This idea of asset destruction for newbros may be different considering their incoming / country;

Don’t you think that new players also have a responsibility to inform themselves and not be held by the hand all the way to the finish line?
There’s tons of info online about EVE. Relying on a tutorial or Help Chat is the lazy route.

Relying on a tutorial or Help Chat is the lazy route.

So is relying on

tons of info online about EVE

Just log in and play the damn game. Discover things for yourself. That’s where the fun is.

That is the EVE way. Back in the days there was no CONCORD nor hisec nor anything like that, you undocked and anyone could shoot you.

Another one: did you know about learning skills? You had to train them for months to can train skills efficiently afterwards.

Okay, let me be clear, I am not saying that the NPE should spell everything out. I’m saying that it should try to change the way that they think about and approach the game. See, players coming to Eve aren’t blank slates. They come with years worth of experience playing other games. It’s like a form of “video gamal” priming that gets them thinking in certain ways about certain things. And, so I’m saying that the NPE should get them to think about and approach things in a more helpful way.

For example, how many players come into Eve and immediately try to rush into big ships, think of lost ships as lost progression, or get frustrated when the game doesn’t have any mechanics in place to ensure “fair fights”? Or what about the fact that players assume an exponential power curve, because that’s the way most MMO’s work, even though Eve has a flat power curve, and there is absolutely nothing to suggest that it does work that way? I mean, how many times have you seen people fall victim to the PvP readiness fallacy, or say things like it’s impossible to catch up to vets. Hell, we even sometimes get people asking for a server reset.

In fact, check this out: Eve has a flat power curve, and player skill is the biggest factor in determining outcomes. Wealth and skill points do offer advantages, but they are neither sufficient nor necessary in order to get kills, achieve goals, or have fun. Yet, in spite of all this. 70% of the player base thinks power inequality is a problem. That means 70% of the player base doesn’t understand how this game works. 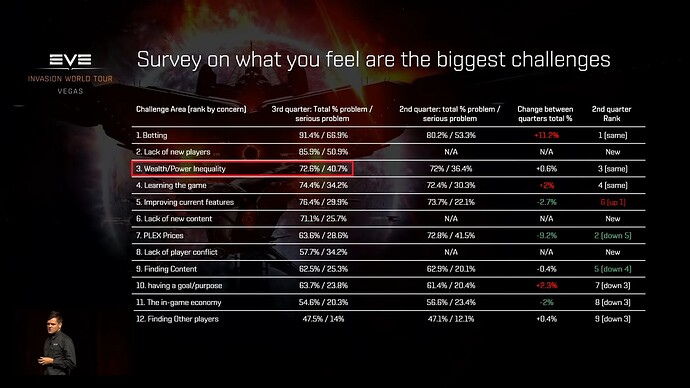 I get where you guys are coming from about letting players figure this stuff out on their own, because that’s presumably what you guys did. But if 70 friggin percent of the player base isn’t figuring it out, you might have a problem that needs to be addressed.

Just jump headlong into the crusher, it’ll be fine

Yes. Yes it will.

And you’ll be happier for it.

you undocked and anyone could shoot you

That’s the way it is now, literally. Except for CONCORD but they’re useless anyway.

And you’ll be happier for it.

Your posting would suggest otherwise.

At least they finally are removing PVP from highsec!

But if 70 friggin percent of the player base isn’t figuring it out, you might have a problem that needs to be addressed

But do we have 70% of players who can’t figure it out? I very seriously doubt it.

Your posting would suggest otherwise

Don’t base yourself on appearances. Don’t translate my words into things I may be feeling. This is a discussion, if you didn’t know, and I am not frustrated or raging or ranting or any other forum shenanigan that you guys use to debase people in here.
I am happy, yes indeed. In fact I haven’t been this happy since my son was born 23 years ago. I live in a nice quiet village surrounded by fields, horses, cows, forests and brooks. I make way more money than I ever did. Things are way easier in my life now and no one can take anything away from me anymore, so yeah, whether you believe it or not, I am happy.

CONCORD ensures whatever they shoot you with will be destroyed so it limits what is viable financially to use against you. Obviously no ganker will use a strategic cruiser to try to pop you for example unless for some extreme reason as an exception.

CONCORD ensures whatever they shoot you with will be destroyed

Of course. It’s much more beneficial for CCP that two ships are destroyed instead of just one.

Well, we know that 70% don’t understand Eve’s power curve. And, I don’t know if you’ve been paying attention the average thread the past couple of years, but a surprising number can be boiled down to, “I don’t know how to play this game, and so I’m asking that you nerf my enemies and/or buff me.”

In fact, where’s @Gix_Firebrand? He seems to be on break right now, but this guy has told people to, “learn how to Eve,” more times than I can count.