A couple of years ago, I killed an explorer in a relic site, and he convo-ed me. I accepted the convo, expecting an insult filled rant, like I often get… instead my victim said he was honoured to have been killed by the top #5 astero pilot in the game.

At the time I was not aware that zkillboard kept “top all time” lists per ship, let alone that I was near the top of one! However, I am not someone who is satisfied at being #5, so I set about correcting this… It took about a thousand kills over a couple of years, but I am pleased to announce that as of now, I am the top astero pilot according to Astero | Topalltime | Ship | zKillboard !

To all the explorers who died under my drones, thank you for your sacrifice, it was for a good cause!

I will of course defend my #1 position tooth and nail!

PS. Whatever happened to the pirate story thread? That was one of my main inspirations when I started playing Eve.

I did not know you can check that. 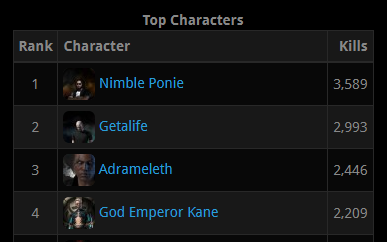 Thank you for that.

Anybody want to buy an IKI with 300 killmarks on it?