Tachyons might still exist. Tachyons could actually be the particle that travels faster than the speed of light and could exist in the medium of infinity. Infinity as a velocity is perplexing to say the least.

Did infinity have a singular starting point that as infinity raced across space, slower than infinity based velocities and space time could have been created. Infinity as a particle with mass traveling faster than the speed of light could mean that new discoveries exist of dimensions and space- time might already be in existence, just on the outside of our Universe.

I tend to agree with the assessment on Anton Petrov’s youtube channel, that the ‘wormhole’ thing was dreadfully over-hyped and really a case of bad journalism.

For all intents and purposes, since the singularity of a black hole is infinitely dense, let’s think of the singularity of a black hole as the infinity of space. Space is infinitely dense, or closely compacted together. If infinity wasn’t closely compacted together and didn’t provide a force of resistance against a Big Bang event, then a Big Bang event would simply, fizzle out into nothing and would never become a universe. For every energetic reaction there is an equal and opposite reaction. For a universe to be born though, a force of exertion or pulling in an outward direction must be present, prior to the Big Bang. The outward expansion of Big Bang event could happen from the singularity as the force necessary to pull the expanding matter away from the point of the Big Bang to create a zone of less infinite energetic reactions could not pass through the expanding matter first but would have to already exist on the outside of the expanding matter and would be traveling at the speed of infinity. Otherwise, the expanding matter would blow through itself at the speed of infinity and essentially create a blowback or the process of suffocating it’s own energetic expanse.

When the Big Bang happened, there must have been a particle present, possibly the fabled tachyon that travels at faster than the speed of light in a very low gravitational environment, that interacted with the speed of infinity to create a buffer zone that allowed matter to expand at FTL velocities but then slowed to slower than light speed velocities shortly after the Big Bang.

For such an event to happen, the very singularity that was the Big Bang, would have needed to have been shielded by particles that allowed the Big Bang to travel through the speed of infinity without being affected until another particle, shielded by tachyons, collided with the first shielded particle that initiated the Big Bang event.

Einsteins theories break down inside of a black hole as well as before the Big Bang, but Sir Issaac Newton’s theories maintains, that an apple that falls from the tree is not a constant mass but changes acceleration due to the size of the apple, where force equals mass times acceleration. Thus, the constant density of infinity does not change its mass, except in the case of the Big Bang Particle, BBP, where the acceleration of infinity doesn’t change the mass of particles, but the acceleration of the BBP that collides with another BBP does change the mass of infinity to the point of creating of universe, or the forceful expansion of matter and energy within the medium of the speed of infinity.

Therefore, there has to be a particle that is part of infinity that acts as force against two colliding BBP’s, otherwise if there wasn’t a force of infinity pressing back on the expanding BBP’s, then the reaction would simply obtain the same velocity of infinity and would not exist as gravitational state that creates planets and stars.

Theories involving infinity are upheld by the biggest fudge factor in the whole of science…called ‘normalisation’. Basically just ignore the infinities and hope they go away…rather than admitting that infinities in the equations mean the theory is wrong.

No, not really, because infinity has its own variable of mass, volume, depth and velocity. 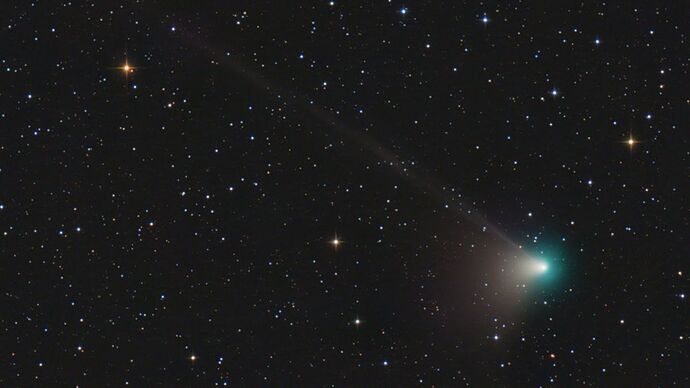 This may very well be the last time that C/2022 E3 comes our way again.

The Big Bang, a Star and a Blackhole

Let’s use dichotomy for the moment: a division or contrast between two things that are or are represented as being opposed or entirely different.

Although light and Einstein’s theories break down at the event horizon of a blackhole and in Primordial Space there is one subject that is infinitely indestructible, math.

Math can be used to measure the diameter and gravitational influences of a blackhole while light can be destroyed. Math can never be destroyed. Math has existed for, eternity, even before the Big Bang and the speed the infinity or the speed of light, math existed and was the language of the Gods and Goddesses. Even before the thought of God and Goddesses existed, math existed. Thus, math is infinity and eternally indestructible. 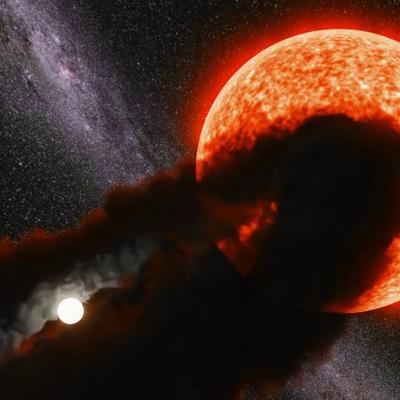 Astronomers might have solved the mystery behind an unusually brightening star

So yes, the event horizon of a blackhole would be Primordial Space-Time that not even light can escape

What is the stream coming out of the middle of a black hole? It looks like a kind of charged matter because it can be seen through a telescope. This stream i speak of sometimes extends out light years away from the black hole if you’d like to go and have a look at this phenomenon online. Is it matter escaping? or is it being pushed out? obviously the interior of a black hole must be chaotic and because it’s spewing out charged matter this must mean atoms survive when they enter the black hole.

No, the stream of radiation seen coming from some black holes is a result of atoms being effected in such a way due to interactions taking place before the event horizon that creates the streams of radiation.

What are the jets coming out of a black hole?

Relativistic jets are beams of ionised matter accelerated close to the speed of light. Most have been observationally associated with central black holes of some active galaxies, radio galaxies or quasars, and also by galactic stellar black holes, neutron stars or pulsars.

What are the jets of gas coming out of black holes called?

Scientists have spotted plasma jets — streams of energy and hot matter — fleeing the core of certain black holes at one-third the speed of light.

We are told nothing can escape a black hole, how is this explained?

The Sun is becoming more active as it heads towards the maximum of solar cycle 25. That means not only more sunspots to observe, but also more chance of aurora…which I really want to see.

If a black hole compresses all elements into Primordial matter and the Higgs-Boson adds mass to a particle after a Big Bang takes place, then perhaps an interaction between a Higgs-Boson and another particle in Primordial space that is annihilated into dark matter is the interaction that activates the otherwise inert Higgs-Boson.

Could dark matter be the by-product of the interaction between a Primordial particle that activates a Higgs-Boson?

If life that is created in the female’s womb is the result of a two separate particles colliding, then couldn’t the same process of a particle colliding with the Higgs-Boson cause the Higgs-Boson to activate and then add mass to other particles that causes growth and expansion?

Fetal Sack - A thin-walled sac that surrounds the fetus during pregnancy. The sac is filled with liquid made by the fetus (amniotic fluid) and the membrane that covers the fetal side of the placenta (amnion). This protects the fetus from injury. it also helps to regulate the temperature of the fetus.

As the Big Bang took place, a fetal sack of particles would have been created that covers the fetal side of the placenta. If this process is converted into particle interaction, then could the placenta, or dark matter, possibly be the placenta of the Big Bang that protected the expanding universe in order to regulate the temperature of the developing Universe.

CNN is posting an article about the inner core stopping and possibly reversing its rotation. Don’t fall for it, the article is part of the Doomsday Clock scam b.s.

When would the crystals in your glands first have come into existence after the Big Bang? Determining the distance from the Big Bang that the first rambohedran crystals would have formed in the Universe could set a new path to determining when consciousness could have started to form.

Rambohedran crystals existing prior to the Big Bang could also prove an aspect of Primordial consciousness that came through the Big Bang.

Under what conditions do Rambohedran crystals form and generate an EM field?

The question is, does the pineal gland form before the eyes do?

Astronomers are at a loss for an explanation of the disconnect between the expansion rate of the local universe versus the primeval universe, but the answer might involve additional physics of the universe.

Reading abcnews is like reading james315 space vs bumpermining com

Would rather read the nasa info.