Eve Players - Do NOT install Windows 11!

Okay so I was stupid to not do some research before installing Windows 11. I ASSUMED upgrading an OS would IMPROVE gameplay, not degrade it. I even bought a better video card.

Now, I should say, all of my games (and I have hundreds) have all worked just fine, or better, with the EXCEPTION (of course) of two-boxing Eve. It is actually much WORSE than my older video card that ran Windows 10. If I run one client - its fine - 100fps. Two boxing (or god forbid 3+ boxing) is a virtual slideshow. And I need to view both screens. Yes, I have the latest display drivers, run in windowed mode, etc. I even have a faster CPU (i7) and 32 gigs ram.

So, unfortunately I will be taking a hiatus from Eve for a while until (if ever) they figure this mess out. Stupid me bought Omega on 3 accounts until June of 2023 several months back.

Or, if anyone has a solution for me, other than running in potato mode, and rolling back to Windows 10 (I’m not going to go thru the hassle for just one game), please let me know!

EDIT: Oh, I heard about some guy using a program called MSI center (or something like that), but I heard too many negative things about it to experiment using it.

That is because Windows 11 has to upload all your screenshots to the NSA.

Is this a Windows upgrade issue or an overall issue with Windows 11?

I have Windows 11. I run 5 clients, 70+ FPS on it, and NO I don’t have a 3060ti yet, waiting for my right time to upgrade. i7 10th gen, with MOBO. Z490 Gaming I think, and a 1050ti (HEAVILY USED) (Not originally mine). I’d like to just scrap them (other card is a 950ti, also not mine and heavily used). Yet I’m running in Fullscreen, alt tab into each account and have no issues. Im using just 1 screen, but have two. Sounds like you have too much downloaded and clogging the routes.

Seriously, give us specifics, don’t encourage people to not install something because you had the unfortunate thing of clicking on bad links and just having it on your end.

Windows 11 has been really awesome infact for me.

No Problems here with mutiple clients. 120fps on the main monitor, 60fps on the secondary. Could be probably more but I limited fps to monitor refresh rate.

Windows 11 here, regularly run 6 accounts in high graphics, no issues with fps at all.

Seriously, give us specifics, don’t encourage people to not install something because you had the unfortunate thing of clicking on bad links and just having it on your end.

clicking on bad links? What? You think I have malware or something? LOL. 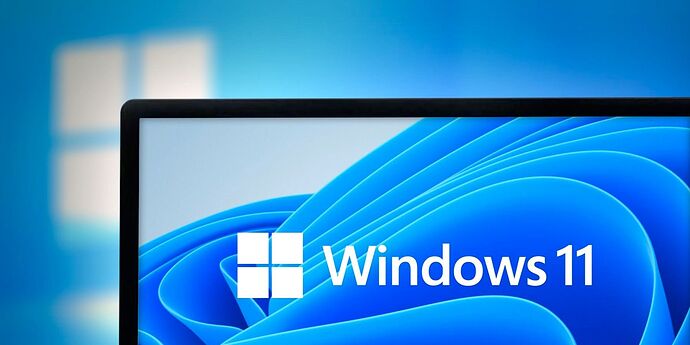 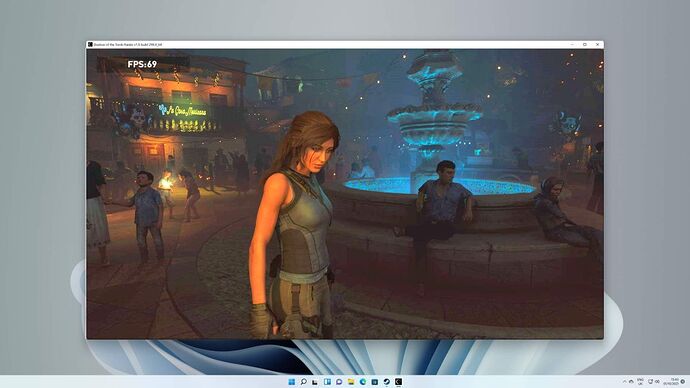 Microsoft 'will be enabling VBS on most new PCs over this next year' and that can tank PC gaming performance by around 25%. 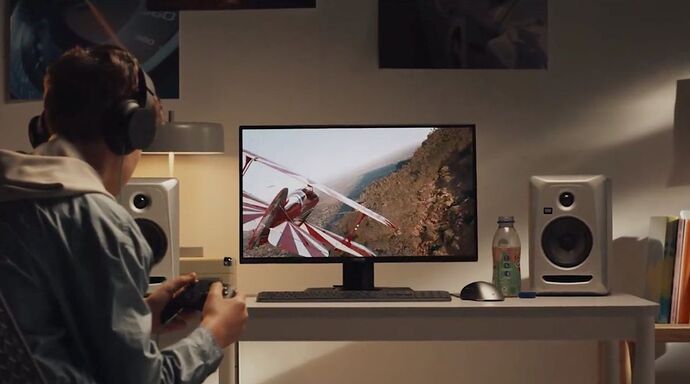 Oh and let’s not forget the thread that’s even in this exact forum:

So, I’ve installed windows 11 yesterday, but since then Eve online stopped working for me. Apparently there is an issue in the either the game compatibilty or in the OS itself and looking at the log files the EVE in Windows 11 cannot run in DirectX_11, either way, I advise someone using Windows 10 to not update right now or if you’re using Windows 11, start the game with Directx9 enabled. This is the issue that you may find in the log files. “bluepy.Terminate - Reason: Failed to create device…

and on and on.

Okay so a few of you are having no issues. I don’t either, on hundreds of games. Just Eve.

One person is running fullscreen…maybe I will try that. I just never did because I assumed it would be worse/more taxing.

I’m not sure what else to tell ya mate, maybe smell the potato you have, if it’s smelly, toss the ■■■■■■ right out. Maybe Christmas time you can get a better PC. Windows 11 is fine for me XD. And it’s still new, so quirks occur, but honestly, Rocket Leauge, League of Legends, EVE, Apex Legends all run over 70+ FPS for me. Once I slap a new 3060ti in there (when these prices are less than abysmal) things will be just fine for years to come.

All I know is this, you have issues, weather that be internally, or externally, that’s just something you have to figure out, and I’ll be here if you wanna talk. Also, the reason I ask for specifics is in your original thread, you don’t give anyone any hardware specifics on your end, you speak of a potato, help us help you is all mate.

I’ve been running 7 clients on Windows 11 for the past month and a half, and have experienced zero issues.

As for the “slideshow” you’re experiencing on the non-active client, which GPU do you have? Nvidia has a setting to limit the FPS of background programs to give the foreground one more performance. Make sure it’s turned off for Eve if you’re viewing multiple clients at the same time. 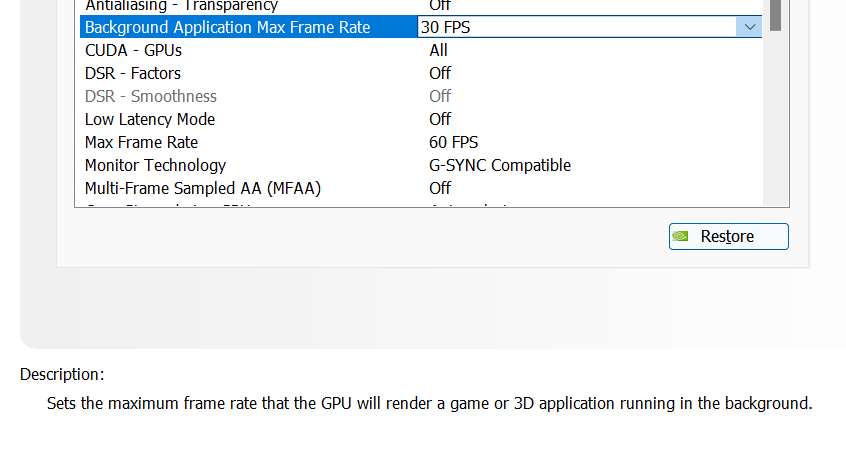 Another solution is to change the Preset Interval setting in the client itself: 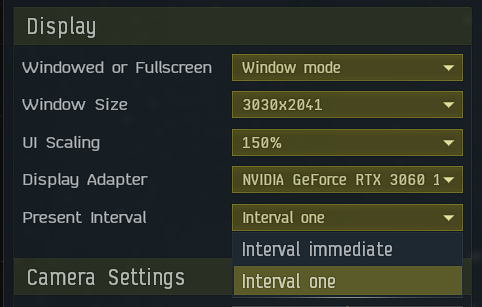 I can’t remember which of the two options has an affect on the background FPS limit issue, so toggle it and see.

You can also try turning off Game Mode in Windows settings (also on Windows 10):

For various solutions to my problems instead of talking down to me and telling me to “get a new computer next Christmas”! I shall try these and report back.

Okay, this is just weird. I think there’s just some windows setting that’s messing with things.

I tried all of the methods above, nothing changed even after hitting ‘apply’ and restarting game.

Gonna paste 2 pictures of my 2 monitor setup. The first picture shows screen 1 at slideshow performance, while I have screen 2 focused. The second picture shows when I have NEITHER OF THEM focused, and you can see I get around 35fps. Still worse than my previous video card and windows 10 setup, though.

Any suggestions would be appreciated. Yeah, I blocked out my video card. I don’t need the “OH THERE’S YOUR PROBLEM” when it worked perfectly fine before with Windows 10.

Have you restarted your PC since applying the settings I mentioned?

If none of those options worked, including disabling Game Mode, I’m not sure what else to try. Those options worked for me. Have you put in a ticket with support? I’d ask about “FPS throttling while client not focused”.

I have not. However, I changed the frequency of my main monitor down to 60mhz (Used to be 144mhz), and now I am getting 60fps on the main monitor (the limit set in Nvidia control panel) and a solid 30fps on the secondary monitor, which is good enough for me. Just SLIGHTLY worse than I used to get, so livable.

I will restart and see if it improves as well.

Thank you for your help.

Just because it is a conspiracy theory doesn’t mean it’s not true.

The mother of all replies. That was good.

You have to understand this is a forums, and im just having a bit of fun is all. I don’t do this like some on steam where it seems to be their “profession”. So I apologize for anything scathing I may have said. But I am trying to help you out, but was just unable to, due to not being provided details is all originally.

Anyhow @Dray I wish you the best, and hope that we can meet up in game sometime. Cheers mate! o7

I also hate to state the most obvious, but, have you updated the drivers for the graphics cards?

Funny enough, just last night, I am running into some funk as well. I updated my card just now, so I will see if it got “fixed” but. since I run 2x monitors (not the same exact model, same brand) I run them in extended mode.

I use the main monitor on my desk, while the other one I use when I fall asleep and want to watch TV.

But, the issue is the 1/4 left hand side of the screen (in game) turns into the windows cursor icon, and right clicking plops me back into the desktop. So. I’m gonna see if it’s fixed since updating my drivers,

However, sorta annoying because the way I lay out my 5 characters and the tabs on screen.

Working fine at the moment. I will test my main characters who are a total of 5 using them by alt tabbing. I know, what a noob I am, alt tabbing haha. I’ll see if that issue occurs of the cursor popping up, if not, then the update worked.