Disagree with most of that.

You are leaving out losec as probably the most likely place to blow up. Try “greenlighting” there… lemme know how that works out

This. Feel free to come to my lowsec any time, you’ll see how ‘safe’ EVE is.

You’re then basically the exception that proves the rule!

nullsec is extremely safe, highsec is a bit less safe (because of its nature of having lots of people not affiliated with each other, thus giving criminal life at least a bit room to work) and lowsec is, well lowsec and FW is a PvP arcade.

when the majority of people ignore others, or lives isolated from neutrals or enemies, then the game’s too safe.

you can’t be everywhere!

Actually, the reason highsec is unsafe is due to the illusion of safety. Nowhere in EVE is safe, though. It might seem safe to people who think they know what they’re doing, but that’s how you slip up.

What makes EVE unsafe, all of it, is the unexpected.

yeah, sure, but we have to look at the reality of the situation: not enough individuals are interested in killing others.

it doesn’t matter what we think about highsec’s safety, when the numbers show that there’s a lack of kills. even in a fully unrestricted environment there would be no kills when no one’s interested in killing. safety isn’t a result of restrictions in freedom, it’s the likelihood of getting killed!

so while you’re right in theory, in practise it’s simply too safe.

thank CCP for this situation. vOv

yeah, sure, but we have to look at the reality of the situation: not enough individuals are interested in killing others.

That’s entirely their own loss. There are a lot more on zkill, by the way, even in high sec. The killboards are updating with new kills frequently. Just because you don’t see it going on doesn’t mean it isn’t going on. Maybe you should get out there and start contributing, instead of whining on the forums.

I’m doing my part. You do yours.

This. Feel free to come to my lowsec any time, you’ll see how ‘safe’ EVE is.

when’s the last time you actually made someone lose the game? I don’t mean just blowing up. I mean actually bring someone to the point of “guess I’ll have to grind another week to afford a new ship”? not a trick question, genuinely asking for I might just be out of touch with reality. but I recall stuff like that happening non stop. now it feels like you can blow someone up a thousand times and still not dent their wallet. thats my definition of “safe”, a lack of consequence. following that logic, there is nothing you can do to make me feel unsafe.

I don’t know, and I don’t care. It’s irrelevant. I’m nobody’s but my own keeper. It’s not my responsibility to keep track of the wealth of others. Additionally, your personal definition of ‘safe’ is also irrelevant. My goal is to encourage more people to enjoy PVP, so I’ve actually been known to throw money at newbros (and no small amount either) who’ve taken big losses to the point where they don’t feel comfortable risking more to PVP. If your idea of ‘unsafe’ is feeling like you could lose everything, then first you have to define everything, because financial wealth is not the only thing on the line in this game. The social dynamic matters a whole helluva lot more, and who you know is as important as what you know. Reputation is key, and crushing an enemy’s reputation is, imo, far more satisfying, and losing your own far more dangerous, than losing any amount of isk.

In any case, the idea of EVE is PVP. If people feel like they could lose everything they have and ‘lose’ the game as you define, they aren’t going to want to PVP. That kind of ‘danger’ is, to put it bluntly, just really dumb.

yay, finally more than a oneliner!
not only that, I actually see your point and I agree wholeheartedly. eve is indeed a deeper experience than just the capital aspect of “now I have stuff, now I don’t”.

If people feel like they could lose everything they have and ‘lose’ the game as you define, they aren’t going to want to PVP. That kind of ‘danger’ is, to put it bluntly, just really dumb.

When I started playing eve, the “real consequence” aspect was what drew people to the game. losing something was really losing something. same with your joy in crushing reputation, once its gone its gone. which is the same sense of consequence I am talking about, only from a more meta-social perspective. Probably this happens more within your circles of eve, but I think it is ultimately the exact same thing, you are putting everything on the line.

Anyway, all this is somewhat besides the point. by starting this thread I was hoping maybe something emergent might come out of it. genuinely looking for ideas to invest in (tossing isk at newbros is a more common hobby it seems). any ideas?

When I started playing eve, the “real consequence” aspect was what drew people to the game[/quote]

It still does. If you dealt with as many new players just starting out as I have, you’d know there are more than a few who are drawn to it for this very reason. But the ‘stuff’ you have isn’t all you can lose. That’s my point. You keep talking like the danger is exclusively related to the space pixels you might lose. You’re just wrong.

thats not at all what I am saying.
I am saying there is a lovely balance between the two. and I think you can agree with me on that one.

I can. I just don’t agree that EVE is safe. Maybe EVE feels safe to you because you aren’t trying to make it more dangerous, or you aren’t putting yourself in dangerous situations. Maybe your personal opinion that there is a lack of risk is more related to risk aversion itself. Lots of people in this game refuse to take a fight unless they’re 100% positive they can win. For years now, I’ve been doing the exact opposite, and taking all the fights I’m not sure about. I still avoid the ones I’m 100% certain I will lose where possible, but my best fights and best kills came from the fights I wasn’t sure about. I frequently encourage others to do the same. “Can I beat that in this?” The newbro asked. “Go find out,” Remiel replied. Ever the space cowboy.

The risk is there. Make no mistake, it is there. It’s up to you to dive in and take the risks yourself, or be a risk to others. All this moaning on the forums does is remind people that people prefer to demand change from others more than be the change they want to see themselves. The means to be that change are there, it’s up to you to make EVE the place you want it to be.

That’s what EVE is.

And just to add to that, the people who don’t take the risks are the ones who have no effect on EVE. If EVE is safe for a select group of people who don’t really try anything dangerous, then you can rest assured they are having no tangible impact on the universe.

Just grab a ship without cloaking device and take a sightseeing tour outside of high-sec.

It won’t take long for something to happen… 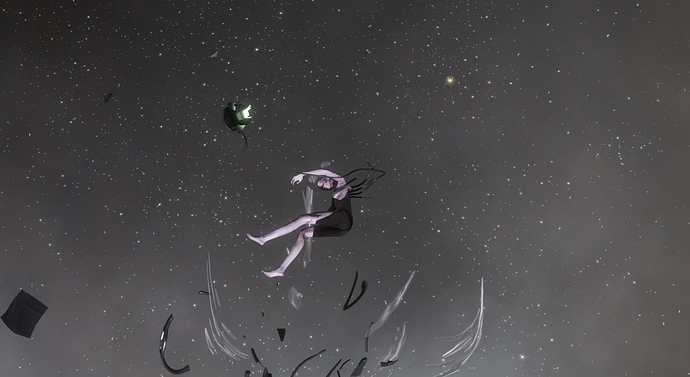 To make Eve safe, just log into Eve. Mission accomplished. Even if you stay docked, you have to make sure that what you’re buying on the market isn’t priced for a billion instead of a million. And, that cute little toon in local who is unsubbing and giving away his stuff is not your friend.

get rid of local, and have HS systems turn to LS when too many deaths happen in them. Problem solved.

I agree. Aviod the 100% certain to lose fights and take the rest. The best stories come from those

Biggest change responsible here is inflation and isk velocity. There’s just so much more money moving around that losing a ship doesn’t hurt like it used to, for anyone. I have a couple corp mates I’ve promised to reimburse for any non-idiotic losses they take outside of high sec in pvp or exploration. Despite the offer, I have to look at the corp loss mails now and then and see what they lost because they just don’t feel the need to ask for it.
Keep in mind, mining enough ore for a thorax took hours when you were jetcan mining in a frigate. In an Exhumer you’re talking minutes.

In a rorq your talking many thorax a second;)