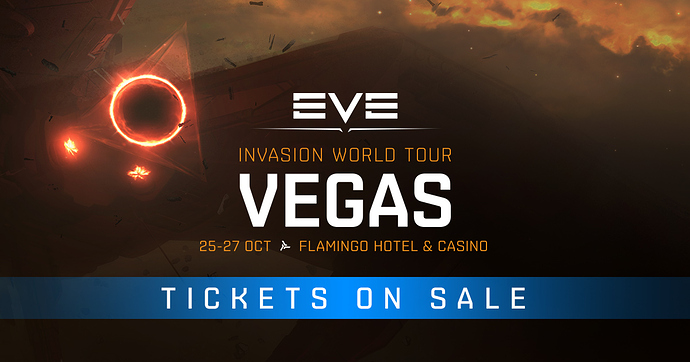 Check out this news item for more details on EVE Vegas 2019, and a little more information on what’s coming up for North America in 2020!

So no more EVE Vegas.

When will the adults at PA step in and tidy up the messes you make?

There are more continents, countries and cities.

Whats the matter? Don’t wanna go to another city in the US? There’s nothing wrong with switching things up.

@Theron_Larkis
What are you crying about? They are looking to expand to more US cities, and did you not read where they are visiting more of the European areas, as well as Russian Fed?

You realize I was replying to @Wibla right?

What a poor decision. “this event is so popular…we decided to cancel it!”. Just CCP things.

I have to wonder, if CCP is visiting different places around the world to check on the players…would you guys ever consider coming to South America? Brazil or Argentina perhaps?

It’s a shame Vegas goes as an official venue, but then I’m sure SD will be great as well.

And for other parts of NA how about another on-top-of-the-world event in the Canadian rockies, at the summit of Sulphur Mountain, Banff

Well i wont be going to the San Diego event. Woulda been nicer to move east rather then west.

Killing EvE Vegas seems like a mistake. I understand switching things up and the Euro/RUS/Aus changes are great. Eve north solid add.

Hopefully, I am wrong. SD is an okay choice. Its on the water without the cost of LA/SanFran.

Lot of folks mentioning Austin TX as a more central us city.

EVE Vegas works and has been working for years, and is by far the best attended EVE event.

Don’t really get the Vegas -> SD decision. Vegas has a bunch of hype around it already and well SD I mean what’s there? And it’s like a 250 mile difference. Like moving it to Orlando or something would make sense, I’d get that, it’s on the other side of the country and also a big tourist destination.

I like the idea of moving the US event around. EVE Vegas is difficult for many of us father East to get to, and it’s not helped by selecting San Diego for next year.

Either pick a more central location or have an East Coast and a West Coast event.

That’s a big old disappointment. NOTHING will be like Vegas. A global tourist destination that gets eve players from all over the world to visit. You can’t party the same way in San Diego - or anywhere else for that matter…and that’s the entire reason pilots choose to come to Vegas for the event.

Don’t really get the Vegas -> SD decision. Vegas has a bunch of hype around it already and well SD I mean what’s there?

Comic-Con has been held in SD every year, and TwitchCon is being held there this year. It’s hardly an odd choice for a convention, and it’s nice to see them holding the main NA event in different cities every year, provided they don’t choose some godawful place like Phoenix.

Chicago would be nice