Hello, guys! “Game client closed unexpectedly” on these settings on M1. What am I doing wrong?

The wine options going back to Verizon 208 was working for me until last week and now I can’t get it to work at all. Eve team has pointed me there. Can anyone help?

Now I run EVE on M1 with Crossover → Steam

Crossover + Steam is the only way I got it to work, but I do get crashes 1-2 times per week which has kept me from doing my normal multi-day forays into WH space.

Ditto that… just running the game now… OMG… im like a kid with a new toy. 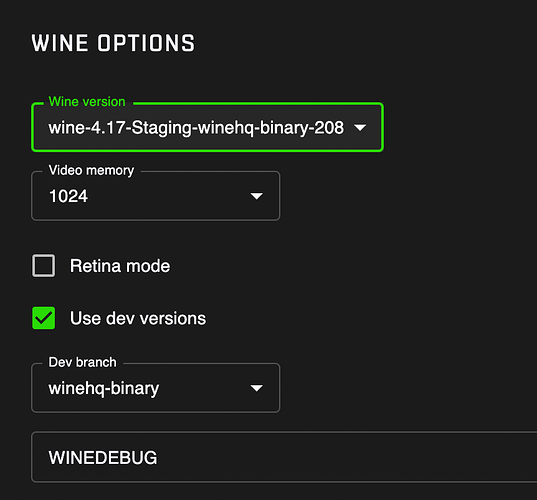 I’m pretty sure I used the latest, 5.x for a while and it stopped working just a day ago after some updates were downloaded when launching the launcher.

I wonder what people recommend for Video Memory?

Hi, im having a huge problem with not finding those settings in launcher. Checked everything, have a Russian version, can’t switch to English due to Eve checking my Mac. No settings button in the launcher Wine is nowhere, only can change the profile ones. Mac on M1. Need setting to get to Wine options. 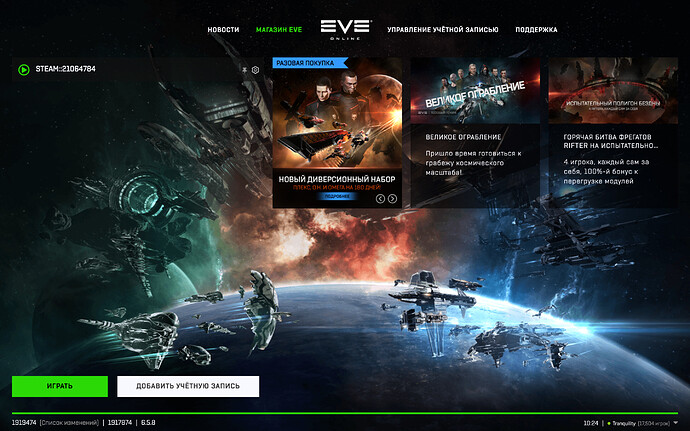 When you have the launcher selected - on the top left of the menu bar you should see it (next to the apple icon) click that and click preferences > that should get you in the right area.

Using the Wine 4.17 Dev verson is NOT working for me. Big Sur 11.3, M1 mac mini. Anyone else have same issue? or am I missing something?

it was working on 4.17 but since the last update it is no longer working

have you found a work around for this

confirmed. not works on 4.17 after lastest patch
**upd now works with 4.17 after new patch xD

I’ve tried 4.17, i cant get past the launcher. Also tried crossover, freezes at the first wreckage site. Really excited to get to play this.

Anyone got another work around?

Edit: i forgot to mention i have also ticked ‘use dev’

CCP promised support for laptops based on the M1 chip through backward compatibility. They constantly say that they are working on it, but it is impossible to launch the game. How CCP treats players on mac also now I treat CCP. I’m tired, it seems like it’s time to say goodbye to this game forever.

For CrossOver you need to select the “run with logs option”. Otherwise it will never open.

I don’t use CrossOver. I’m running a standard client. They promised it to work on the macbook m1. In general, I am not satisfied with running the game under wine. And now I have to run wine under a different emulator, while it still does not work. All normal online games have made their client under the mac except for CCP. This is unacceptable. If they think that there are not enough players on the macbook and you can deprive them of the convenience of the game, then they have at least one less player. Let them continue in the same way.

They are literally building a Native Mac client. There have been multiple testings so far, and while I personally haven’t tried it, other players have told me that it runs with on the M1.

And now I have to run wine under a different emulator, while it still does not work.

Please contract me your stuff on your way out.

In my quest to get a stable running client on my MacBook Pro M1, I’ve ran the following setups:

Conclusion: Until CCP comes out with a native Mac OS M1 client I’ll be switching back to my old Wintel desktop.

As a preface, I use CrossOver and run EVE with the Log option (I can’t remember exactly what it is called atm).

Some planets, not all, are like disco balls, with every frame showing thousands of gaps in the texture somewhere else

I used to have this problem, somehow that problem has been resolved. Have you tried fiddling with your graphics settings to see if that changes anything?

when I fly to an Azbel/Raitaru, client (graphics) freezes (eve_crashmon runs in background but never finishes), have to Manually close eve_client). Music keeps playing normally.

Never had this problem with Citadels, but I’m unsure if I’ve ever gone to an Azbel/Raituru. When I undock from a Keepstar it takes a second to load but I think that’s normal.

This, I’ve never had. EVE on my M1 used to completely crash my computer once a day atleast (RIP my midgrade Snakes) but it hasn’t done that in months.

So maybe consider lowering the graphics settings and see if that does anything. If it doesn’t I’ll need to investigate what I’ve done because I run two clients on Medium graphics and never have performance issues.

Any updates on this or a date when its going to be working on the M1?