In response to reports of suspected Deathglow attacks on Skarkon, escalation of hostilities on the planet, and the refugee crisis in Ishohuolvi the Bosena Accords has deployed multiple blockaid runners to supply humanitarian aid teams on the ground. However, these small resupplies can’t meet the demand for aid and Khumatar Kril Efrit’s efforts have made securing the Gulormola planetary corridor increasingly difficult on a regular basis. In addition, our victory against Spacelane Patrol in the south has proven costly and left the bulk of our forces with a massive material shortage that will need to be resupplied by our primary battlefleet in order to maintain our influence on the planet. While we continue to seek mediation with the Republic Justice Department to deescalate the situation on Skarkon, we cannot sufficiently negotiate a meaningful and longstanding peace without proper relief.

This in mind, the Bosena Accords will be working over the next two weeks to coordinate substantial relief to the people of Skarkon and warclone-allied groups opposed to RSS-Krullefor rule. Once materials and staging areas are established, we will deploy our primary battlegroup in support of the capital-class warbarge Fisher King II.

Our projected deployment date is set for Sept 5 1600 EVE time. Once deployed, Fisher King will rendezvous with the primary battlefleet, pass a series of checkpoints, then pass in low orbit over the Gulormola corridor to rotate personnel and equipment planetside.

We ask allied groups and those sympathetic to our cause to please coordinate over the coming weeks to build relief packages and assist in planning our deployment. Likewise, we advise those not involved in the conflict to steer clear of the region to minimize potential risk during our operation.

Operations are now underway to secure the Gulormola corridor and resupply our troops planetside. Thank you to our allies for turning out to support our battlefleet. We will remain on grid in Skarkon until Fisher King completes its supply mission. Your assistance is critical to managing the situation on Skarkon.

Seykal Expeditionary Group battlefleet spotted on grid clogging the corridor, potentially putting our staging camps at risk. Our primary battlefleet is still in transit to support Fisher King before pressing on to Skarkon. ETA ten minutes.

Well. That happened. This is going to be a very, very long after action report. Standby for updates.

A summary of the events that unfolded in Skarkon is listed below. Please note that exact times and order of events are still being corroborated with our analysts based on camera drone footage taken from the battle. Having said that, after convening with our allies we have determined it is in the best interest of the public to present an initial order of events while the information is still fresh and current.

Prior to 1600 EVE time, Fisher King entered the initial staging area orbiting Skarkon II, Moon I. Fisher King held position for the primary battlegroup to arrive in theater. Roughly thirty-five minutes after initial staging, our escort ship observed a small unidentified craft in system operating under the name Skybreak Succulent. The craft disappeared from scanners shortly afterward, assumedly either leaving the system or cloaking. The craft was not observed again following the initial contact. We make no assumptions about the origin or nature of this craft at this time, but it is likely that it represented some form of third party observer or that its presence was entirely unrelated to the situation in Skarkon.

Shortly after, a vanguard force of Rupture-class cruisers from the Seykal Expeditionary Group arrived on grid and began forming a blockade of Skarkon II over the Gulormola corridor. Eight minutes later, the vanguard force was reinforced by a fleet of a dozen Tempest class battleships. Within twenty minutes our primary battlefleet of capsuleer allies arrived on grid and rendezvoused with Fisher King and her escort. By this point, the Seykal fleet had fully formed in the orbital corridor above Skarkon II. 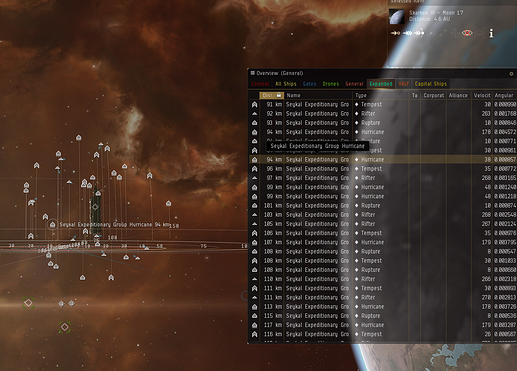 Over the next half hour, the allied battlefleet focused on running the Seykal blockade in a series of low-orbit passes scraping the Skarkon II mesosphere to rotate supplies, prefabricated facilities, MCCs, and humanitarian relief planetside to the city of Sakak. The Seykal blockade remained formidable, however, and prevented our fleet from being able to remain on grid long enough to carry out a sustained deployment. By 1700, Krullefor Organization forces arrived on-scene to support the Seykal Expeditionary Group fleet along with three Seykal Expeditionary Group freighters retrofitted to act as planetary warbarges in a similar fashion as Fisher King. Seykal clan warbarges were confirmed to have entered atmosphere, though it is unknown how many troops were delivered, what equipment was moved planetside, or if any troops and materials were transported off Skarkon II during the conflict. 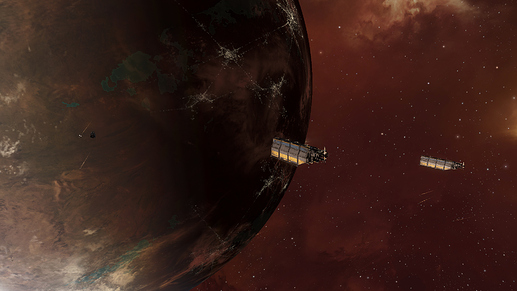 After an hour long standoff between allied capsuleers and the Seykal-Krullefor blockade without any exchange of fire, former Warden Knight Guard Fury arrived on-scene at the helm of the planetary dreadnaught Eternal Dawn in a show of force to tip the tides in our favor. While the Bosena Accords proper were marked kill-on-sight by the Seykal-Krullefor forces, Warden Fury and his specific warclone clan was labeled as ‘blue’ by Seykal-Krullefor forces for unknown reasons. Attempting to leverage this position, Fury worked to deescalate the situation with the Seykal fleet by requesting that they disperse and do not interfere with our ongoing resupply efforts. 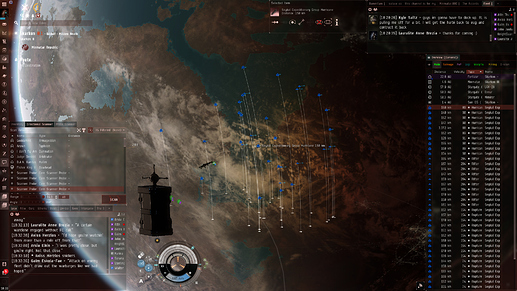 Despite numerous warnings Seykal-Krullefor forces continued to hold on grid and act hostile to Bosena Accords transports, leading to the Eternal Dawn and our support ships opening fire on the hostile fleet. During the skirmish a large portion of the Seykal-Krullefor fleet was destroyed, while the Eternal Dawn was heroically lost after suffering a mag detonation from her main gun battery. After the battle both fleets exited the area to fall back to their staging areas. The Seykal warbarge fleet was briefly spotted continuing its deployment to Skarkon II, but allied capsuleers were unable to tackle and destroy the craft without fire support from Eternal Dawn. 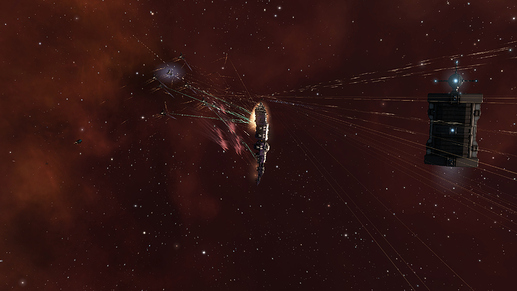 The allied battlefleet returned on grid with Fisher King, deploying emergency rescue teams to recover survivors from both fleets. Simultaneous, sappers from the Bosena Accords assisted in salvage and controlled demolition of the Eternal Dawn to prevent any large wreckage crashing into populated areas on the planet below. Once both tasks were completed and the grid was secured, Fisher King completed its remaining deployments planetside to complete our resupply efforts. 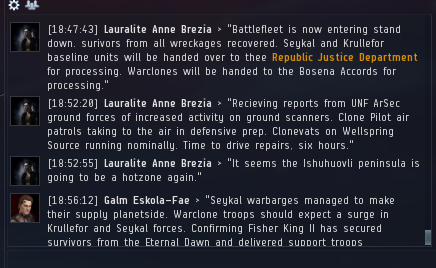 Overall the operation was of mixed success. While our fleet accomplished its primary task of resupplying our forces on Skarkon with Fisher King without the loss of our warbarge, we did not anticipate the overwhelming Seykal-Krullefor presence nor Seykal Expeditionary Group warbarge flotilla. All allied forces on the ground in Skarkon II should remain on high alert and expect an immediate surge of Seykal-Krullefor troops and equipment. The Bosena Accords and our allies are still conducting mop-up operations to locate and destroy the remaining Seykal-Krullefor fleet, as well as the three Seykal warbarges should they be found.

At this point, the ties between the government of Skarkon, @Kril_Efrit & the RSS, and the Seykal-Krullefor conspiracy are irrefutable. Its my sincere hope that the Republic Justice Department has been monitoring the situation closely and that they will take all of this into consideration as they continue to investigate RSS actions on Skarkon II.

Special thanks to our allies who turned out to assist us in our time of need, as well as local Skarkon pilots. Gold star goes to local pilot @Walter_Islands for single-handedly drawing enemy troops away from the planet to give us all extra breathing room during our blockade runs. For additional camera drone photos of the battle taken from Knight Guard Fury, see here.