There is a lot that doesn’t add up. The Federation has generously provided the cluster with examples of how to suffer major planetary damage from just one capital ship, and that example appears to have been ignored by the commanders of this suicide attack. Yes, ancient history is ancient, but it seems like anyone with three capital ships to spare should at one point have been told “don’t crash one of those babies into a planet while you’re listening to an inspiring earnings report, now!”

Of course, the Federation has also generously provided the cluster with examples of how to turn back an attack by Matari capital ships only to immediately capitulate to all Matari demands. However, we cannot reasonably expect any other sovereign nation to possesses the Federation’s incomparable patience or its well-established distaste for effective self-defense.

Whoever is performing terrorist acts against us in an effort to provoke all out war does appear to have given Amarr the most concrete claim, yet.

I would just like to update this release with a brief statement that the Excubitoris Chapter is pleased by the reports about a full investigation by the Brutor Vanguard into the leaders of this attack. They suggest at least the possibility that their denials of responsibility are genuine and that those responsible for the action will be identified and brought to justice.

I also would express the hope that the situation on the Ardishapur Circuit/Matari Republic frontier deescalates and that further violent actions such as those seen in the last two days do not continue to occur on this frontier.

I would just like to update this release with a brief statement that the Excubitoris Chapter is pleased by the reports about a full investigation by the Brutor Vanguard into the leaders of this attack. They suggest at least the possibility that their denials of responsibility are genuine and that those responsible for the action will be identified and brought to justice.

What if the pilots were performed this act did not do so out of free will? After all, there are many entities and ways to corrupt or compromise a human. Sansha…Drifters…Triglavians. I would not be surprised if any of those had corrupted them to weaken their enemies.

Given the events in Girani-Fa, the Chapter has been given full mobilisation orders in preparation for whatever decision the Empress makes.

However, unlike the Brutor Vanguard hit, which was entirely in character for veterans who began service around the time of Shakor’s coup, the Gallente provocation is strikingly out of character and I would suggest that the odds that this is indeed some sort of false flag conspiracy are far higher than they were yesterday.

I was confused about the history of Girani-Fa. However, the source of confusion has been cleared up.

I admit the Federation is perfectly capable of acting foolishly.

However, a favorable deal was in place. That deal was reached through Quafe diplomacy, one of our most cherished forms of art. I do think it is a safe bet the Federation did not decide to ruin everything by trying to seize the system with five dreadnoughts. Someone is screwing with us.

Whoever is behind this is purposely baiting the Empire into demonstrating just how much we have militarised in the last two years.

I can see scenarios in which a Matari or Gallente agency would decide to set that bait. I can see several other options as well.

Either way, it is imperative that the Matari Repubic and Brutor Vanguard as well as the Gallente Federation and Crux Special Tasks Group need to quickly figure out how these breaches occurred and provide evidence that deescalates the situation as quickly as possible. We need to see clear evidence of investigation in good faith and punishment of those responsible for enabling these attacks for this situation to deescalate.

“False flags” or not, attacks are attacks. They must be dealt with. It is not only a matter of avoiding international conflict, though that is certainly a worthy goal. There is no reason why whoever is manipulating the situation could not turn the resources being mobilized against whatever nation is “responsible” for them.

The primary concern in my eyes is the introduction of these cynosural field beacons that are able to bypass the jammers that normally deny unauthorized cyno fields from being deployed. No matter if these are “false flags” or not, whomever is in control of these units is able to strike anywhere within the Empire, thus the mobilization is entirely necessary.

Completely agreed. I fear that the inner cluster will ignite while the party truly responsible benefits from the flames.

If war is to be the outcome and it is truly the fault of the inner powers, there is little to be done that is not being done already. If there is an enemy lurking among us, manipulating this, it is all the more reason to turn the forces mustered against them instead of each other.

I believe it follows a pattern and I do not believe any of the inner powers to be responsible. I pray they are not. But if they are, there is nothing to be done. If they are not, and the true enemy is not uncovered, the price of failure will be measured in oceans of blood.

And on that note, Chakaid’s whereabouts have not been mentioned since the single update that was given, confirming his whereabouts are unknown. That was shortly after the first dreadnought attack. How odd.

it represents an existential threat to the Empire.

Welcome to the club.

Either way, it is imperative that the Matari Repubic and Brutor Vanguard as well as the Gallente Federation and Crux Special Tasks Group need to quickly figure out how these breaches occurred and provide evidence that deescalates the situation as quickly as possible.

And if the evidence points back to the MIO? I mean, if I was running a false-flag operation that already involves operatives infiltrating 2 different nations’ military structures, the first thing I’d do would be to nest it at least 2 layers deep. I’m already going to need to be planning long-term and waiting for the right opportunity, so it doesn’t make sense to half-ass the thing.

Worst case, by first infiltrating the ultimate target’s intelligence agencies, I get access to all of their research on the best ways to infiltrate my catspaws, and if my later infiltrators are discovered, even that serves my ends by getting the empires pointing fingers at one another.

It is my honor to report that last night an Amarr Militia Fleet mustered by Paladin Newelle of the Excubitoris Chapter and led by Divine Commodore Mikal Vektor of Local is Primary was able to secure the wreckage of the most recent of these planetary dreadnaught attacks.

As is our clear duty to God and Empress, we have contracted the evidence from this wreck to @Khemon_Dulsur_an-Tetrimon as the duly appointed representative of the Blessed Emperor of All Amarr, Catiz I into the investegation of these incidents.

We would like to express the deep hope that this evidence will be useful in defending Amarr first and foremost, but also in preserving the relative peace created by the collaboration of the CONCORD signatories.

May God be with us all as we untangle what seems to be a bizarre conspiracy. 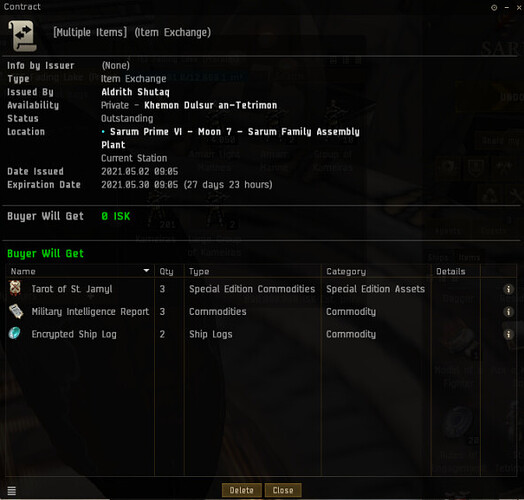 As the one who recovered these materials I would like to make a request of all authorities investigating these matters to openly cooperate and share what resources and information is pertinent to their respective inquiries.

Personally I believe the best course of action would have been to split the material evidence amongst the interested parties, primarily between CONCORD and the Tetrimon inquisition, but that decision is not mine to make at my position. I pray the powers of the cluster see reason.

Such a course of action would have indeed benefited an open and transparent investigation, and gone a long way to convince the international audience that the pious words of peace coming from the mouths of the Plague of Floseswin are more than simple lies and deception, intended only to lessen the will of free people to start fighting back.

There was potential for that course, it was suggested four days ago, backed by modest financial incentive. Nominally Ms Rhiannon, you are a diplomat; as such it was your job to have understood the political risk inherent to an Imperial subject condoning, let alone offering to reward the transportation of evidence pertaining to so high-profile a crime out of the Mandate.

You chose to decline that option and seek an unadulterated win; in so doing making what had been something politically risky into something politically suicidal. After imposing a binary choice as surely upon those loyal to the Empire as those loyal to the Republic, you whine and gnash your teeth at the Plague of Floseswin as if you had no part in your own misfortune.

If you took responsibility with as much talent as you cast blame, you may even have learned from this.

Sometimes one can be honest with their opponents… Sometimes one defends an armed incursion into sovereign territory with known enemies of the sovereign power, that then ‘retaliates’ against the expected defensive response from appropriate authorities. Then follows up by painting anyone who disagrees as not understanding the delicate nature of their armed inclusion.

I pray you don’t expend too much effort in discussion with the latter. Your righteous energies are best preserved for someone entering the discussion in earnest, not simply as bait.

The Excubitoris Chapter will continue to foster a reasoned voice within the united wall of the Faithful. At times like these it as important as ever.

Your temperance and measure here, as much as your quick action and hardened resolve, are a shining example for others.

We would like to express the deep hope that this evidence will be useful in defending Amarr first and foremost, but also in preserving the relative peace created by the collaboration of the CONCORD signatories.

And here I’d figure the foremost use of the evidence should be getting to the truth of matters, regardless of whose ends that serves.