You can not enter numbers like 929,835.58 into the window for chaning or adding market orders. This works before. If you change it to 929835.58 it works. So something changed here…

The new automatic-decimals in contract windows broke the copy contracts function. It no longer accurately copies the price.

It adds extra numbers on the end, or, if you’re contracting to alliance (and probably also corp/private) deletes the money entirely.

Screenshot from copying a Cheetah contract - note the extra 0 on the end. 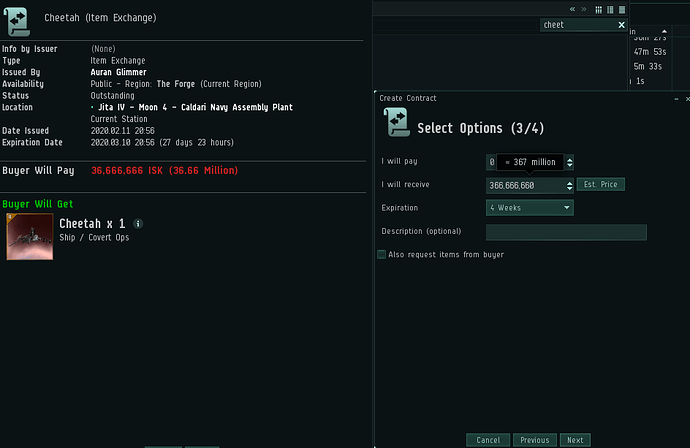 Copying a contract to alliance generates a weird L on the end. 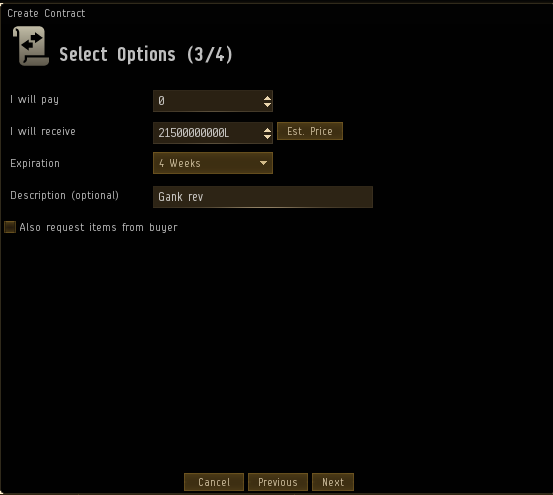 If you click through this the price auto-sets to 0. If you manually remove the L you find the price is 10x what you originally set it as (same as with the Cheetah earlier.)

The dynamic camera is borked, too. If you have auto-tracking on when you undock and try to “swirl” the camera around, the camera freezes in position at a weird angle.

We do not guarantee a response to bug reports. Generally, you should use a bug report when you are telling us about a bug (as you did) but not when you require a response, such as if you need assistance with your account. In this instance, the problem you reported is a known issue, and we track those using a different system than the one used for bug reports, so your bug report was closed.

At least 2 right click actions are missing. Unable to right click on character and invite to fleet and right click option to scoop drones from space into drone bay is missing.

Then, if the usage of the bug reporting system were consistent with its status descriptions, one would expect it would have been flagged as “Attached”, rather than “Closed”:

Attached: This report has been linked to an active defect.

However, I think you’ll agree the current communication practices make for an uneasy situation for the players who -despite not requiring a response per se- have to decide if the silence on CCP’s part (and the closure of a bug in this case) means:

The fact that, as I pointed out, the thread with the known issues for a given release may stop being updated by CCP after a few days, still listing bugs which were addressed in follow-up patches as existing, makes a strong case towards the first option. Yet in the latter two, one should adapt to the new situation and accept it as the new baseline.

Nevertheless, thank you very much for the clarification.

I see that the copying of amounts in a trade/sell field is kind of mentioned, but I’m finding that if I try to change a number partially, and that partial is covering an area with the new separator, that the number I attempt to put in will be scrambled.

(Also, the new items notification for my cargo… could we change the color to a ‘purple/pink’ and also let me select when it appears? The number issue is far more important, however, thank you.)

The vni appears to be missing 50Mb of drone bandwidth and has an extra gun slot. I hope this was unintentional and we can expect a speedy resolution.

You’d think they test these patches before going live.

I just found out, that from right-click menu in space disapeared navigation to custom offices. The same with right-click menu when click on planet in planetary interaction window. Was this intended or it is a bug? Hope it is a bug, because it will complicate life to all players using planetary production……

The greater than ( > ) and less than ( < ) symbols are replaced in bookmark names as the html entity references, &gt; and &lt;, respectively.

This is not actually displayed in the bookmark name, but instead is only apparent when you attempt to edit it. When I go to edit the bookmark name, my cursor is “off” by 4 spaces, and when I type it does not type in the correct location.

It’s acting as if the &lt; is actually in the string, even though it isn’t displayed.

Bookmark names in the right-click menu in space are being truncated at about 25 characters.

They are not being truncated in the People & Places dialog, or in the dialog that comes up when you press “L” (Saved Locations in current system).

How the living F4ck does one turn off the incessant beeping in the inventory badging? I almost quit the game today I was so angry at the sheer irritation of the inventory UI binging every few seconds when salvaging. Who on earth thought that was a good idea. It’s like plastic toys for infants. My god, you people at CCP never cease to amaze me in how thoroughly you can mess things up.

The boss’s 10 year old nephew, most likely. The binging and flashy badges is like something you’d get for a 2 year old.

Just give us an option to TURN THE F4CKING THING OFF!!!

The inventory is a mess… the plex vault is a mess… awful. Warcraft III reforged level of anger here…

lol it was nerfed

Could you please stop breaking things those are not broken and start repairing broken ones ?
Ever since You started messing up the inventory UI i spend lots of my time mitigating the damage done.
Nothing was wrong with Wallet UI for ages but noo someone had to change it. Whats next ? Walking in Stations again ?