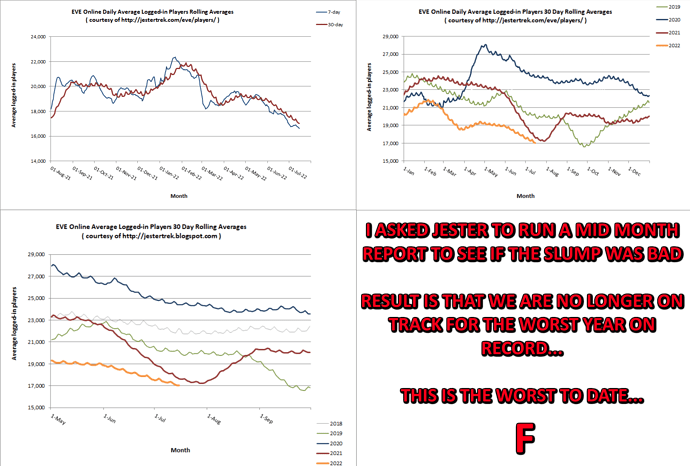 What is CCP going to do to fix the game they broke?

I can not wait to see the next quarterly earning report for the company.

Soon. They’re already testing a set of exciting new features on a Chinese server shard, and if everything goes well, by this time next year EVE might be in a much better place.

With a title like that I though you had an idea how to fix the game. I feel swindled!

CCP have gone full corpo. They’re not looking to fix the game so much as to show a profit in the next quarterly report.

If that means laying off half their staff or banning all but the bots, so be it.

This is what they get for not doing basic due diligence on a cost/benefit analysis before being the first idiots in the world to up their subscription price by 33%.

Yea I’m loosing faith by the day if CCP don’t make some post about it in the next 2 months I don’t think anyone is going to keep pushing on.

You removing perma death and no ganking in high sec xD that’s not really Eve anymore.

Can’t make an omelette without pouring some pre-packaged, pre-beaten liquid eggs from a carton onto a skillet.

With lots of added suger and some scratch to win’s printed on the side of the packaging, included in the cost ofc.

It’s not exactly all that surprising that Eve concurrency shot up just as lockdown measures were being introduced in 2020 and millions of people had little else to do but sit at home all day and play MMOs.

Also, as someone who has actually done statistics, I’m forever wary of ‘sawn off’ graphs. They visually mis-represent the true figures by making rises and falls appear much larger than they actually are. A tactic so often used by those wishing to exaggerate a point.

millions of people had little else to do but sit at home all day and play MMOs.

99.9% percent of those “millions of people” would rather sit at home all day spanking their carrot until it was raw rather than play a game like EVE Online.

I can do both at the same time just fine.

Do I need to be panicked? Concerned… Because I can still fly and enjoy social interactions in EVE…

Not sure how you play without hotkey’s that’s disastrous

You need to still click on the target I would press T then mouse click but I would really like to know if we can scroll using up or down arrow to move up or down the overview data. Same as tab would be nice to twitch tabs on the overview also.

This is the worst year to date…

Your data does not show that, since you’re only showing data from 2019-2022 while eve has existed a LOT longer.

You are also comparing the 2022 spring, which is relatively COVID-free, with the 2020 (notice the BIG SPIKE in April?) and 2021 springs. That is not a fair comparison!

This is a typical case of lying with statistics… if you really want to make a point, show the full data!

Look at their post history, its been nothing but shitting on ccp all because they can’t mine, for profit, solo, in an orca, in hisec.

I just want to know if @CCP_Rattati still thinks all the players he made quit are coming back when they see how much his 2 years of nerfs have “improved” the game.

I can do both at the same time just fine

I can’t prove it 100%, but this comment seems to me to be microaggreasive towards individuals with 1 arm.