Thank you CCP on the great changes made to FW.

However, with introducing new navy ships, comes their uses by pirate neutrals in FW plexing sites…

It begs the question:

Why should a non-aligned neutral player reap all the same benefits when flying those navy ships inside plexes as aligned FW players would ?

FW pilots work to farm the LP to pop those ships into the market, so why should some randoms be allowed to roam around with them and cause risk-free disturbance to providers ?

Isn’t it now time, to restrict neutral uses of all Navy (old and new) ships inside FW plexes ?

It could come in many forms, ie: resistances penalties when entering plex, or dps nerf, or agility … all depending on the type of plex site entered, perhaps …

Going the extra mile with the introduction of all these new navy ships is a must in my opinion, to streamline the new FW experience and to make neutrals think twice and smarter before using navy ships against aligned FW pilots and entering their turf.

Nope. Their earning the LP too and paying it out that or using ISK.

Nope. Their earning the LP too and paying it out that or using ISK.

How does a neutral earn FW LP ?

FTR Endecom systems have restrictions, Trig systems have also , Abyssal sites too, wormholes have them as well …

Shouldn’t navy ships and sites be you know … NAVY restricted content ? The whole point of having an aligned Navy to begin with, or a FW system for that matter …

Neutrals should have no say in this matter, or at the very least, a dampened say, or else bling out their non navy ships, and risk on a little more for taking on military units…

It’s low sec, you could just push them out forcefully yourself.

I get you’re salty about being blapped in your own navy ships but LOL.

Just shoot them and be done with it.

It’s low sec, you could just push them out forcefully yourself.

But…but…I thought CCP was supposed to handle my problems for me.

Obviously, you did not. Or maybe you didn’t even read the OP. Do you know what the subject matter is and did you contribute to the conversation? No need to answer, we already know.

This thread has to be a joke, as it’s exactly the sort of low-sec whine I’ve been warning about recently.

Why should a non-aligned neutral player reap all the same benefits when flying those navy ships inside plexes as aligned FW players would ?

FW pilots work to farm the LP to pop those ships into the market, so why should some randoms be allowed to roam around with them and cause risk-free disturbance to providers ?

Isn’t it now time, to restrict neutral uses of all Navy (old and new) ships inside FW plexes ?

As a former neutral who spent the past, what, 6 months? Disturbing the local FW warzone: No. Lowsec pirates already have one of the

-iest and difficult lifes in Eve Online. Outside of FW, it is hard to find fights, and we already come into your sites as suspect so you have:

I was recently warning about incoming whining about wanting a safer time making ISK in lowsec, I just didn’t expect it so soon!

I already get low-sec hate mail from killing AFK ventures and empty-ship LP farmers in Faction Warfare. It’s only a matter of time before they cry to CCP and CCP starts making LowSec like HighSec Lite.

Literally have an Eve mail sitting in my inbox from killing a Rupture that was ratting in low sec belts. This is one of about 4 people I’ve ever seen ratting in belts in low sec the past 6 months. The body of the Eve mail is along the lines of “I was farming you ■■■■■■■ idiot”.

It turns out, they are very much interested in safe space.

I used to think like you, until Scipio provided me the data. Now I have an even more cynical view based on my personal experience: the higher prices will indeed entice some people from High Sec into their first Low Sec belt ratting foray, as the spawning rates do support the market. But they’ll get blown up for their first time instead of High Sec, and first learn about D-Scan in Low Sec. They will complain to CCP about how dangerous Low Sec is and send nasty Eve Mails to their killers.

CCP, ever in their quest to ease the burden on the complaint department, will make Low Sec safer.

That will more than likely raise the price of tags which would then hopefully entice more PvE players to farm those tags in Low Sec. Thus ultimately creating more targets for PvP, especially since the High Sec target pool will be diminished due to these new restrictions being implemented on negative Security Status…

…and then they’ll get killed while ratting in a LowSec belt and send hate mail to their killers and then whine to CCP about how much much much more dangerous LowSec is than HighSec and demand that the wide berth of difference in danger is reduced so that newbies to LowSec can be protected and have a chance to improve player retention or else they’d quit because HighSec is too boring and there’s not enough ISK to be made ratting in belts/anoms in HighSec and they refuse to rat in LowSec where it is just simply too dangerous.

you guys can dock everywhere and get counter ships
plus you guys don’t have to fly jack of all trades ships , just wait on home system for people to plex
several times some smart pirate came to my plex at the last minute with a OP blinged ship for the FOMO play
its not like positioning will matter much wen a garmur point you outside of aurora range
plus suspect is kinda irrelevant its like that just to not lose sec status every time a pirate enters and bail (like it was before)

Sure, being neutral has its benefits too. None of it is overt ISK-making like FW LP.

I hear you, but I think you over emphasizing some weird aspects.

Nothing says that you as a militia member must fly a jack-of-all-trades ship into a plex.

yes we have , because we set a BIIIIG waypoint destination and go plex all over the war-zone and specialized ships makes no sense

Nothing forces you to have to warp into a plex with your aurora beam-laser ship where there’s a Garmur waiting.

the garmur jump on the last minute overheat and even with 2 webs i cant kill hin before he is 15 km away and them he goes like 50 and still point me , the ■■■■

You can fly blingy Garmurs too. 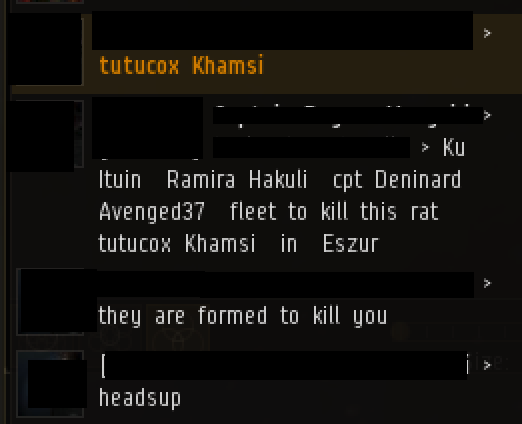 Sure, being neutral has its benefits too

im militia because of LP , else i would be neutral
and for the love of amarr but that is irrelevant here

btw pirates and militia are LOW SEC , i like both ,dislike all the rest that came after , to me this fight is weird

but i never saw someone saying what you said

im militia because of LP , else i would be neutral

Let me be the first.

and for the love of amarr but that is irrelevant here

No it is relevant.

What’s even the point of having aligned and empire relevant breeds of navy ships if said ships end up in the same furball in the end ?

I always found the concept so abhorrent, you could just simply skip the “Navy” label and call them “Elite”, and that would be the end of my argument, and complaint.

And I wont even start the imbalance brought by Navy Destroyers related to cruisers, with current HP, cruisers are utterly useless now, and just get welped, even buffer fitted ones.

So yea, we have tons of neutrals running around in those now.

It was bad before with Worms, and now, well thanks, we got something else…

I’ll just patiently wait on the incoming nerf before I throw any of my time into this.

We pirates have FW alts, We also farm LP and We also Buy the Ships.

Kite the 2 thrashers with a Nano Snake Orthrus

Yeah, I havent spent all my time building and making brawly ships for this update to have them rendered utterly useless now.

Do you know how long we had to adapt to ■■■■ gameplay due to incessant Worm use ?