Gallente were literally the only faction that failed to accomplish anything pre-patch wise.

They couldn’t build their stargate.

They couldn’t resarch anything.

Literally ever empire except Gallente succeeded. Then on expansion launch the Gallente NPCs just invade and secure all these systems… I get it, I’ve seen the logical explanations online already I just thought it was funny that the biggest failure got the biggest gains on patch day. All because of the devs using NPCs.

like they left the stargate construction up for SO LONG lol but… yeah.
Why are Gallente so chad when they’ve literally failed everything… repeatedly.

Hookers and blow I think

Or maybe the Dev’s just drank too much Quafe…

They couldn’t build their stargate.

They couldn’t resarch anything.

Maybe it’s because they spend their resources and time to strengthen their fleet instead?

You have to set priorities and a free Intaki is one of those.

The Gallente federation could not tolerate the incompetence of the capsuleers any longer and they invaded. You can be angry at them, its ok.

I dont really have a stake in FW or anything, I did mine enough ore to build and sell a Ferox NI but I’m not upset about anything that’s happened. I’ll probably do some more FW later with my Caldari account, I made 4 accounts, 1 for each empire, 2 men, 2 women lol.

Yeah Gallente capsuleers were too busy spending their time in pleasure hubs so the mortals had to do the heavy lifting. Such is the Gallente way.

It would be great if player participation in PvE events genuinely made a big difference to the outcome. But it seems to me the outcome is already decided beforehand…which to me makes my participation in them pointless. If this totally contrived ‘player driven’ scene is the future of Eve and true PvP is reduced then CCP should not take my subscription for granted.

We haven’t seen the results of these contests yet, we don’t know what will be unleashed from the research.

Gallente were going to attack no matter what (because Gallente-Caldari warzone needed to be smaller). The Empires are a part of the sandbox though. Just like oh so many years ago the Minmatar attacked CONCORD and the Amarr Empire, which resulted in FW rules being put up in the first place.

Turns out the frenchie president is a girl.

If this totally contrived ‘player driven’ scene is the future of Eve and true PvP is reduced then CCP should not take my subscription for granted.

There’s two ways of looking at this:

The first is, yes, CCP talks sandbox and “player driven” events, but in the final breakdown the results always seem to be scripted to produce whatever end CCP desires. It’s this “it’s a sandbox as long as you play the way we want you to” perception that’s driven a lot of players away from EVE.

The second is, that as events happen, CCP realizes maybe there were design flaws in the event (various FWers have pointed out the event design made it hard for Gallente to earn rewards). And so they apply a “post-fix” to the event results so nobody gets beat out by their poor design.

Tyrannical CCP or Benevolent Caring CCP… the choice is yours!

The first is, yes, CCP talks sandbox and “player driven” events, but in the final breakdown the results always seem to be scripted to produce whatever end CCP desires. It’s this “it’s a sandbox as long as you play the way we want you to” perception that’s driven a lot of players away from EVE.

There’s a chapter in Half Life that is quite literally called ‘On A Rail’…no doubt the developers sense of humour as the entire game is effectively of that nature. Of course, the fact that it is ‘on a rail’, and has a pre-scripted outcome and the player knows that ( even if they don’t know that outcome ) doesn’t stop it being one of the best games ever.

But somehow that sort of immersion just doesn’t work for me in Eve. In Half Life you lose all your stuff half way through…quite a galling moment…yet it is all scripted so you get it back again and carry on. The goal of the game is not stuff but beating the bosses. In Eve faction warfare you can lose your actual stuff in some conflict the outcome of which has already been decided…and to me that just makes such loss pointless. It’s not like Eve has some big boss to defeat at the end that makes it all worthwhile. That is why I vastly prefer PvP…if I lose stuff I have only myself to hold to account. 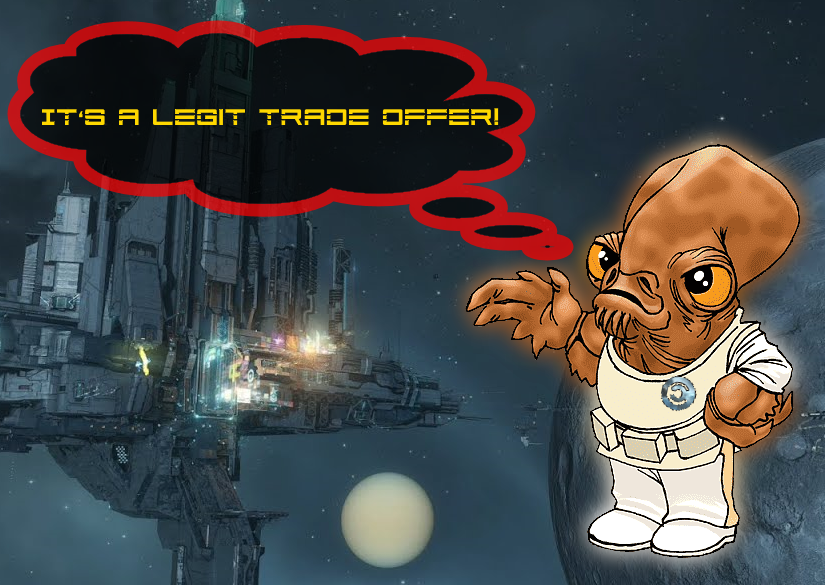