I’m having a problem with the game crashing and locking up in a “not responding” state. It messes up my entire computer and forces me to reboot it to get the launcher and game to fully close. I canno’t shut it down with the task manager either. I’ll try to attach some images so you can see what I’m seeing. 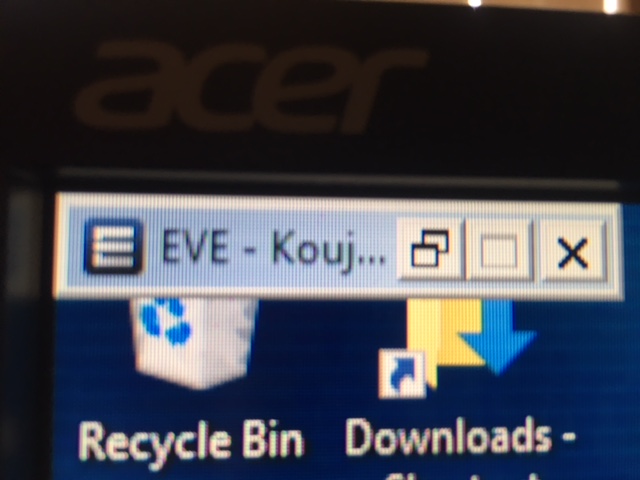 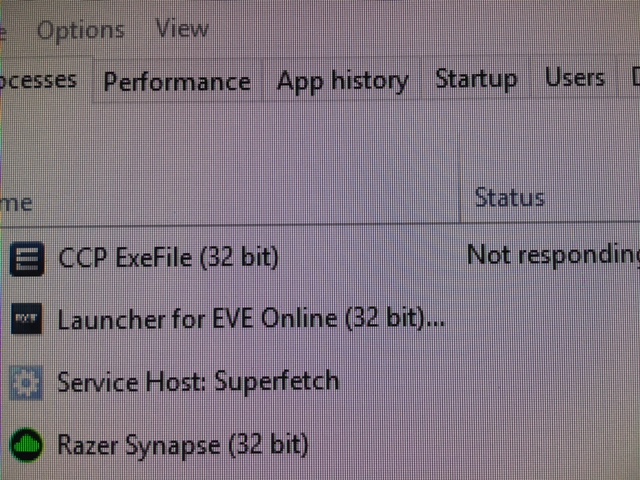 Oh thank got its not just me.

Exact same issue. Only happeneing for me since Friday at the latest. Works fine for about 20-30 minutes than the video flickers once and everything freezes. If i can get to CTask Manager (Not always Possible) it says Not Responding but Task Manager wont allow it to close. Did find a way to not have to reboot though. Might only work in Win 10. If you Press Windows Key and TAB you can see the running apps AND the option for a 2nd desktop. Open that and then open Task manager onb the 2nd desktop then you can close the Not responding Eve client from there. I’ve checked with CPU and GPU Temps and duiumps and nothing shows on either of those but I do see some weird messages in the Lite Logging tool where the client looses the Display Adapter. I tested the video cared by running a heavy Benchmark opn it for an hour (Easily enough time to crash 3-4 times) and nothing happened so its not the GPU.

there have been so many posts about not being able to log in, my hope is that people search for those posts and add to them rather than creating 10 posts a day from different people saying that they cannot log in

If you turn down the graphics options, do you get the same crashes?

(I had a problem with high shader settings, because my graphics card was dying on me. But only caused problems on certain settings.)

Just started happening to me today. First my pc locked up and i had to shutdown by the power sw on the back. Rebooted, and the primary account just poof died. Then the launcher said I didnt have the right update. Annoying but lets see if it keeps getting worse.

I run many accounts so I am always in Potato mode.

Turned out to be overheating. Apparently my PC was more filthy than I had expected.

+1. Same exact situation.
As been happening since last patch.
Need to log off with CTRL+ALT+DEL to fix.
No overheat. The game just locks up.

Same happened to me today as well, can’t CTRL, ALT, DEL to close it have to shut down then cancel the shut down when the com ends the program. Tried clearing the cache, verifying the files still doing it.

I found a work around for my system.

I noticed the Start bar failed to open when the client had the full screen to itself so i switched to windowed mode for everything. After 3 days of crashed every max 10-15 minutes I went 2 1/2 hours straight on 4 clients max settings not even a glimmer of a hiccup.

I think in my case I can definitely say its something that happens only when Eve is running in fullscreen mode. (Your results may vary.)

BTW this is a workaround. I still think this is an Eve issue as NO other program causes any graphics problems including the graphics card speed tests

Yeah windowed mode seems to work although I’d rather not be forced to use it.

I had the same issue, crashing quite often, I had to kill the EVE client with CTRL+ALT+DEL and navigate with TAB as my mouse was not working outside of the taskbar. Tried to change my EVE graphical settings, updated everything on my PC, change windows 10 settings … But was still crashing every 10/15mins.

Since 5days I’m playing in Window mode and it’s not crashing anymore. \o/

I’ll open a case to CCP with my findings because I’m quite sure it’s related to EVE client only as I’m not facing this issue with my other games.

Ya my chacter has been locked down for 14 days now