That never happened. One was a Culture keepstar, the other was a Horde keepstar.

It’s like you guys don’t even listen to the media.

Its been fun to watch you practice your spin. If this was over irl water rights or something I might get upset. But watching you troll the Eve community has been a real eye opener to the community at large. Your utter BS a source of entertainment. Gl in Delve (I know, its not yours either).

Reading the spin from both sides is half the fun.

So, let’s talk spin and reality. Brisc has already shown the awesome spin… which entertains me a lot. And prior to this thread, the Imperium had called Fountain and Esoteria as floodplain, knowing they were going to lose them.

However, let’s give some credit. Pandafam did a lot of work to quickly wear down INIT in Fountain. As they discussed on Talking In Stations, they were reffing things just to force INIT to defend them… even though Pandafam had no intentions of attacking. But they did make INIT form and then blueballed them. It was effective and INIT started forming less and less due to CTA fatigue.

So, then INIT pulled back to defend certain constellations. And now to Delve. That’s the spin and current reality.

Now… here is another reality: Goons are entrenched in Delve.

The Alliance to end Goonswarm has had the cap and supercap advantage; going into Delve, that completely flips as its nigh impossible to project into Delve. So, that Alliance isn’t going to have the cap advantage. And most people believe Goons probably hage more supercaps in Delve than the rest of Eve combined.

Next, Delve is FULL of structures. And structure grinding is boring. I can’t imagine how bored it will get trying to grind all of those structures… and that’s assuming the Goons don’t defend.

Finally, the Imperium has already stated this will be a hell war and a war of attrition… and frankly, has anyone done that style of war better than the Goons? I don’t think so. And they are ready.

So, back to the spin. The Alliance to End Goonswarm is talking about how easy they’ve had it and how easily they are winning up till now. And how it will continue to be easy. I’ve already explained the reality.

I’ve said it since the beginning: Goons will likely lose the ISK war, but they will win the strategic war. Especially because Vily and PGL selfset a victory condition of destroying Goons. Note: not removing them from null-sec, but destroying Goonswarm. That’s a nigh impossible win condition.

I’m enjoying the spin by both sides… but I see the reality too.

but I see the reality too

which is totally not a spin XD

Hard for me to spin when I don’t care about who wins and loses as I’m not in either bloc. The skin I have in the war is if my prediction is right.

I’m the opposite…Im in both blocs

btw they have fountain frank
beware

But thats what most goons essentally were before becoming the nullbear variants. They just get higher bounties and bigger rocks. 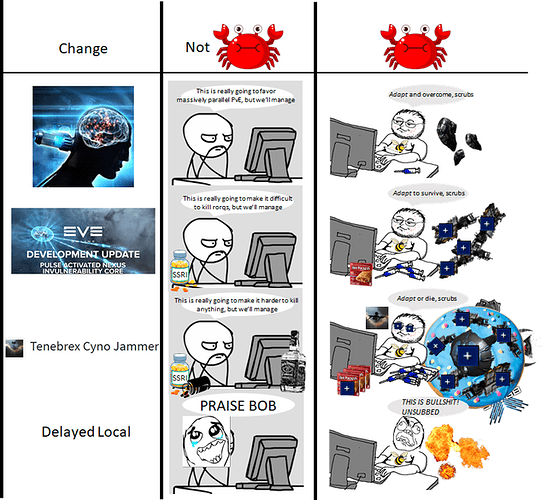 What is the big deal? Can’t INIT just rent Fountain from the new owners?

Past a certain point it becomes a job: work. The enthusiasm drains and prior incentives lose their luster. Things shift from what could happen to what must happen…and the whole point to playing a game is to have fun, not bend to uncompensated employment.

The writing on this wall was there the moment the wall went up. It’s just taking this long to play itself out. The final product will have the attributes of the elements that compose it. No surprise there. Ego never did make much of a building material. Still,…a long way to go yet. How long would it take a blue whale to die by inches?

Maybe Goons can get CCP to change the rules somehow… that would be easier than dealing with a big war.

Maybe Goons can get CCP to change the rules somehow…

It’s what they’ve always done in the past.

Go for it, little bees. Whatever it takes to win.

Maybe Goons can get CCP to change the rules somehow… that would be easier than dealing with a big war.

Unfortunately high sec players are busy defending their homes in High sec.
Unfortunately the shortest route from the most populated region of space to south was compromised by Goons themselves also.

Goons will have to fight on their own. High sec will not come.

Goons will have to fight on their own. High sec will not come.

I remember getting the call to pack up my stuff in detorid as we were taking delve. 77S8-E you will always be my home.
The endless cap fights, brawls and skirmishes.

I miss the goons of old. In the end they became what they tried so hard to destroy…Bob v2.0

Step aside and let someone else be the most hated in eve.