Last night was on an alt and decided to check out local belts as wanted to try something.

There were four Gurista Kestrels that were hitting hard and wouldn’t let me get near, tried a weak destroyer sniper and it got killed then they locked the pod a podded that too as I wanted to see if they really would so didn’t warp off.

This is awesome and great to see NPCs that are smarter than the 'roids they sit in.

Ok, they are probably old news but had to say that I love it as a player who’s not logged on since 2014.

For good measure, make sure you also read up on triglavians, and that they are visible in your dscan filter (triglavian entities). They may be a problem when you warp to celestials and are equally vicious. Their presence is related to wormhole connections in the system, leading to Pochven space.

For the diamond rats that podded you, you can add those too to your preferred dscan filter, so you have advance warning of their presence, in case you didn’t check Agency > Encounters > Pirate bases (e.g. when you travel a lot).

In overview settings under entities: 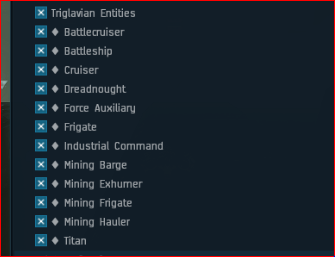 Thanks for both responses and this is great that NPCs are dangerous in high sec now.

I am thrilled to see this attitude, I sort of expected this post to be one of the “this sucks, CCP needs to fix it” threads. Instead I find someone actually appreciating a challenge, bravo!!

Just wait until you want to do something more than test out a new aspect. For instance, when they kill you on a gate where you fight with someone from RVB-B. You are going to be thrilled about that.

It’s funny, though, to see that someone who hasn’t played in years appreciates something that has caused nothing but issues and next to no positive gains over the years since its introduction. Reinforces my claim that only people who don’t play EVE appreciate things happening in EVE.

Are you referring to the Triglavian gate and station camps? Or just high level NPC’s in general?
For me, and yes, sometimes they have made me pretty angry, they present a challenge that gives me something to work towards. As it stands right now forward operating base rats, diamond rats at astroid belts, and the bulk of the Triglavian stuff is beyond my ability (I had just gotten to the point where, with some difficulty, I could solo Emerging Conduits when they were removed much to my distress). I want to be able to stand and fight these fleets, and at some point I will, and that, that one bit of knowledge makes me like them being around.
Do I think the instalock-instakill Triglavian camps were a bit heavy handed on CCP’s part? Sure, but I learned to deal with them and then they got nerfed.
If I’m lucky they will still be around by the time I know more and have the skills to stomp on them.

I also have it in for the Drifters, so far though they crush me like a grape every time I take a stab at them, this makes them another goal of mine.

And then there’s the Blue Donut. Someday I’m going to eat that donut even if I get food poisoning.

All of these things belong in Eve I think, we cant just get killed by other players, there has to be a mixture of threats of all kinds. On this I think that some objects should be dangerous, astroids are a good example. They should move and colliding with them should cause damage. Mining them should make them become unstable and break apart if you aren’t careful and the chunks should also cause damage. This would have the added benefit of making mining more fun and much more interactive. There’s a lot of things that could be done to make space itself more exciting, but anything like that will make the usual suspects go apeshit and demand CCP “fix” it for them so they can be safe.

You might have guessed from all this that I don’t like being safe, I like the rush of knowing that anything I do could have dire consequences, or huge rewards.
I suppose my attitude will piss off the garage milksop but that’s life, space is dangerous and that’s just how it is.

Hi sec used to be very boring so this adds some spice, especially as I hear that corps can’t be war dec’d unless they have a structure. If anything EVE seems safer in hi sec these days.

If you want less boring, I suggest that you move to low sec or w-space. High sec does not need to be more interesting or else all kinds of groups do lucrative business there instead of more dangerous and more exciting places.

You might have guessed from all this that I don’t like being safe, I like the rush of knowing that anything I do could have dire consequences, or huge rewards.

The only thing I got from your texts is that you want to be unsafe in safe space where no one can counter your activities without limitations.

Fun thing about the rewards: There are no big rewards in diamond rats. There is only annoying, time wasting, unrewarding content. And trigs offer way too much rewards for the little risk they pose, especially in abyss space.

All of these things belong in Eve I think, we cant just get killed by other players, there has to be a mixture of threats of all kinds.

Fun thing is that people got and get killed all the time by the old, stupid NPCs. Plus, in a better EVE age people would have burned you on the pyre for saying such things. Back in the better days it was common canon that players should do the work of threatening other players and not NPC. That sentiment has gone out of the window years ago and got replaced with this weird notion that NPC should take over these kinds of jobs from players (structure attacks, gate camps, asteroid belt camps, etc) and people rejoice over it.

Respect to you, I have had some really good fun with these diamond rats, I know a lot of players complain about them but for me they add massively to the game.

After having a break a while back I warped to a belt with my two mains into a belt to mine, I was in an Orca and a skiff. The mining ships warped out and in came the response fleet. Talk about a situation and a half, but as I had high drone skilled characters and knew to focus on the tackle I was out of there with both ships intact.

I also found killing the FOB’s good fun, but that was dangerous, if they dropped the cruiser fleet on me I could not handle it, so I had to get out. It was always a real issue. I also took time to skirmish with them in fast ships, was also fun and difficult, better than playing against most players.

A lot of hisec players get upset about them but it is real content.

It is one of the reasons I lost so much respect for the Goons after their massive whine-fest over the Drifters invasion, talk about weak, the MIttani throwing his toys around like a spoiled brat and threatening to attack hisec, what a complete joke.

they are a mechanic that ccp has mostly forgotten about and are generally just an annoyance to the player base. there novelty wore off in about 2 weeks.

This is awesome and great to see NPCs that are smarter than the 'roids they sit in.

I agree. The more intelligent the NPCs the better.