Has there been any talk by devs on improving ui menus and making them more user friendly?

Im wondering if there has been any talk about improving the ui and menus of the game and make it more user friendly and descriptive wile at the same time making them better to see and read.

Eve has been thru many good changes and improvements but is it only me or are the menus still premative and just over all bothersome.

So i guess my question is Why haven’t the over all ui been made BETTER?.. i feel like its one of the major turn off points for new players as someone who has attempted to get many friends into the game, they always are amazed and exited to give it a go but just never really stick with it and i suspect its because of how much effort it takes to navigate the games ui.

CCP has been working on various UI improvements for the entire 5+ years ive been playing, the problem is that EVEs UI started in such a craptastic point at conception.

I would say the that EVEs so called steep learning curve is mostly due to how badly it was designed in the first place but revamping even parts of it always ramps up the bittervets, “It was always that way, so it should stay that way”, arguments and so what real impetus does CCP have to make major UI changes, also there is the CCP fail back position of spaghetti code they cannot seem to fix (that is public relations speak for we’re too lazy to fix the problem or we’re too incompetent).

Dangerous request. CCP is notorious for “fixing” UI by removing what works and replacing it with something that doesn’t.

You can change UI scaling in settings… perosnally I would love to just increase font size (and if ccp finally switched to font like monospace… ffs most of the things I read are number, better make them well aligned instead of causing confusion)

How about we fix The Agency first and have it so you can view the Storyline missions LIKE THE OLD TOOL DID.

Or after we fix The Agency to be AS GOOD as the previous tool we have it list Cosmos missions also.

See this is what you get with “improvements”, you get a tool that doesn’t even do what the previous one did.

Having been gone for over 4 years and returning I can honestly say the UI is not better. It’s just as buggy as it was, (windows locking when opened and not responding, industry interface bugs out and wont accept jobs, gate lag)
I was really hoping for some improvement, but all I really see is a lot less people, and many areas that seem almost ghost towns.

CCP in EVE has one of the best and most consistent UI update histories of any game, ever.

Look in the patchnotes for the UI section (which many overlook), and you will see this to be true.

The complexity/simplicity of how many UIs there are in EVE is staggering, and it gets better almost every month. 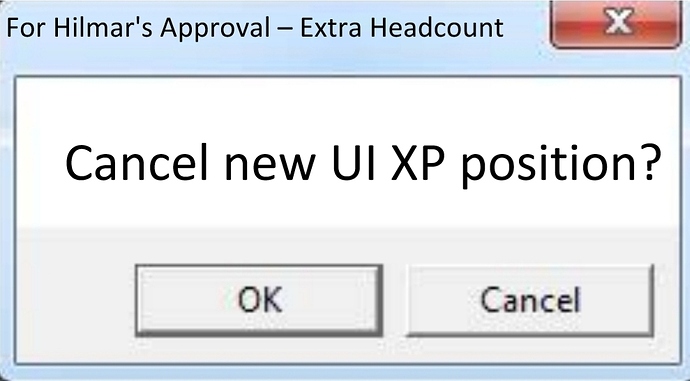 I get snd appreciate the complexity of the ui and menus, however what i have. a problem with is the visuals and primitivenes of the actual windows and fonts. Also would like to see better descriptors when looking at the fitting window for example. A new player when looking at that screen would rarely understand what any of it means. As longtime players we take that for granted.

All the options there, are there to help a player, not hinder them.

Most players never use even a fraction of all thats there, let alone even knowing its there.

Use what you need.
The rest is there if one day you need that, too.

Like every once in a while, when you enter warp, you get a “you cannot do that while warping” message. Do what?

If you have an active module cycling while docking, you get an “external factors are preventing…” message. That serves literally no purpose.

Whenever you log in, you get “attempting to join a channel” for every channel that you’re in. Again I see no purpose from knowing this.

And also when logging in, you see “corp/local channel changed” message at the top of respective chat channels, which make sense if you actually changed system or corp, but they appear even right after logging in. I can imagine new players seeing this and thinking they have changed their corp somehow. And none of those messages can be turned off.

The “redundant” messages indicate you tried to do something you cant.

Its not the games fault. Its yours.
Then figure out why what you tried to do didnt work.

Like what? What I tried to do while warping? If the game tells me that I did something wrong, then it should also tell me what was it.

If the game tells me that I did something wrong, then it should also tell me what was it.

You cant do what you tried to do, anyways.
How specifically the game informs you of what action you took, that you cannot take, is irrelevant.

Figure it out, ask someone or google it.
Thats how the rest of us did it too.

Except that I haven’t tried to do anything. Have you even injected Reading Comprehension?

Its you that is not understanding me.

Starting EVE, you know nothing.
You will have to take time/effort to learn.
The game cant do that for you.

Weve all been there, and all of us are STILL learning.

I think some actions dont need micromanaging, but some require a lot of it. Sometimes watching directional scan and scanning and checking what drones do, and your distance and speed is enough to feel like you would need a second person to do all of that, or at least additional brain lobe. UI is just windows with lot of info there. You have to get eyes on it and not forget to watch it because it can mean destruction of ship.

I dont know how to fix it without going into details of game mechanics.

If it is overwhelming, maybe it is just what capsuleers have to endure by being a one-person-crew.

Say whatb you will but if you look at the game objectively, new players find it hard to learn about it because its. It not an intuative game and it doesn’t provide chat bubbles with short descriptions of what’s in your screen. the game itself is not as difficult as people make it out to be, its just that it doesnt do much to help ti understand without actually having to spend hours learning from 2nd hand resources and most people dont want or have the time and energy to do that.

For example, why can’t the game provide the option for chat bubbles when looking at the stats of a weapon like falloff range etc i remember when i was new i would be baffled for hours trying to figure things out when i could have used that time playing.

Oh, I know what you mean. You don’t want EVE’s UI and message system to be user-friendly or intuitive because that would ruin the game’s reputation for having a steep learning curve and would cater to the dumb masses. But what you call dumbification I call quality of life improvement. And I believe that your line of thinking is illogical. But I’m not going to explain why since you obviously prefer when someone isn’t told what they have done wrong but merely told that they did something wrong. Instead I’ll leave you to figure it out, ask someone or google it.

Say whatb you will but if you look at the game objectively, new players find it hard to learn about it because its. I

Oh, I know what you mean. You don’t want EVE’s UI and message system to be user-friendly or intuitive because that would ruin the game’s reputation for having a steep learning curve and would cater to the dumb masses.

Its really not that hard to figure out the UIs.
They are designed to be user-friendly as far as possible, by untold thousands of hours of work by CCP staff.

You two are conflating the complexity of EVE, with the simplicity of the UI. The former is vastly more complicated than the latter.

EVE UI design can hands down compete, and win, against any other games UI of comparative complexity, as well as website UI designs of major corporations globally.

Most players only ever use 1/100of them, anyways, and dont need the rest (or know how to use them).

Hate EVE for whatever else you want, but you cannot blame CCP for not doing some of the most innovative, continual and dedicated UI work arguably of any game developer or even website developer, in the world.

And the best thing, is that the UIs are just getting better, every single fking month.