Hello. I am new

How do you play this game? I just downloaded it the other day and I love Sci Fi games and I wanna try to get into this game.

welcome. Thats kinda a broad question. Short answer - do the tutorials. Then look for a corporation that is new bro friendly. Make friends and find a mentor. Ofc all of this is largely dependent on what you like to do and want to do.

Welcome to EVE. I’ll do my best because you’ll never get a straight forward answer for this game because of how loaded of a question it is, since it’s the closest thing to a true sandbox MMO there is.

I’ll start by saying, if you’re hoping into the game expecting instant gratification type gameplay that you get from MMO’s such as WoW, you won’t get it here. It takes a lot of patience and practice, reading, failing, etc
I’ve been playing since 2014 and I feel like I learn something new at least once a week.

Anyways, it entirely depends what you are looking to get out of it. Generally players tell me they are looking for PvP.

My advice is to look for a newbro friendly nullsec or lowsec corp after you’ve played around for a bit in high sec figuring out basic controls. When I was new, I hoped around and stayed in high-sec for a little while learning the basics of combat and travel and how the markets work.

Then I looked for a corporation. I found Brave, which I am still in today 6 years later.

Don’t fall into the trap of skilling straight into mining skills and industry right off the bat unless you genuinely enjoy staring at floating rocks.

I personally would suggest skilling down into something you can do some ratting in (PvE combat against NPC’s for income) and also use the same ship or ships you’ll gain skills for in the process that can be helpful in PvP as well.
Eventually you will get to a point of learning new skills and ships and being ableto apply yourself more optimally in each situation.

There’s a lot that nobody can really tell you, =most of this game is just a learn-as-you-go type of thing unless you have questions about something very specific. i.e “what fit should I use for _________?”

https://discord.gg/FuZJAKk - Just released: EVE Guides Discord, full detailed guides for every activity in every space, in one place, Great resource for every corp/player! check it out! THERE IS A LOT MORE ON THE DISCORD, INCLUDING: Links to other EVE Discords List of in-game public channels for all activities List of EVE Partners eve related sites help channels trade channels (selling/buying/trading) recruitment channels voice chats List of current EVE Sales/Updates/…

Hi, I plan on doing PVE work instead of PVP… PVP seems more challenging. Thank you for the information as well…

I would highly recommend going through that thread I linked. Before you focus on a particular tree of ships and modules you want to use, start training important skills that benefit everything such as CPU management, etc.:

If you want to stick around highsec for awhile and just chill and learn on your own time, that’s great and you can do that stuff solo if you’re not ready to join a corp, although there are a lot of high-sec corps you can choose from. I would recommend either mission running and eventually getting into high level missions and Abyssal space stuff, or even Exploration because those things are more stimulating IMO.

Something more stimulating focused around PvE combat will keep you more interested longer until you feel ready to join a nullsec corp which you will eventually want to do as you gain more experience.

Just as a side note, if you do decide to ever live in nullsec with a corp, you don’t HAVE to PvP. it is entirely voluntary. Many, if not all, Nullsec corps have their own particular area of space they actually need PvE to be done every day.
But you will, however, always be vulnerable to being attacked.

EVE is weird. You play it by doing whatever you find you enjoy doing.

If you are having fun, you are playing EVE right. If not … do something else!

Wander around and try random stuff. Make friends. Make enemies. Celebrate when you are victorious, and try to laugh when you suffer losses. It is a LOT more enjoyable to share victories and losses with friends!

I am new too. I have eyed EVE for a few years now but the Free-to-Play option has given me the courage to try it out. I just finished the Tutorial and am now working through the career agent missions. I am looking forward to learning more about the game and finally exploring the lore from the inside.

As far as I know, pretty much non-existent, though I’m sure there will be somebody to argue that.

There was an Amarr vs. Minmatar thing many years ago, but the Minmatar side of that RP folded. There are still some Amarrian loyalists around though, but they keep a low profile.

EDIT: Well, then there is our Space Pope Max Singuarlity, but he’s more the exception: 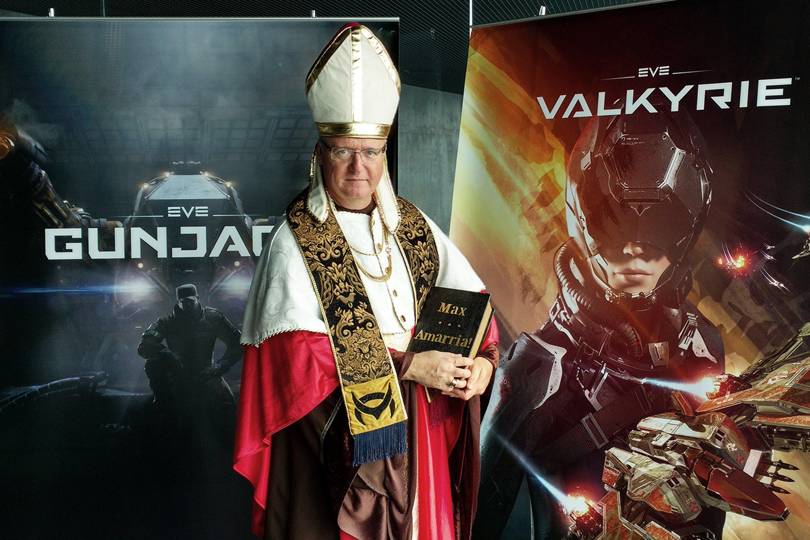 Most active in around the Amarr side of the world. Look up LUMEN in game or have a look at the Intergalactic Summit postings on these forums for more details.

There’s a lot of people play Eve casually as an RPG, working for one empire or the other, just being a good rather than engaged citizen.

fly around, shoot things. That’s about 90% of my plan.

I occasionally yell “yarr!” in local after an act of piracy, does that count?