Here is how to gain good standings to EDENCOM npcs 👮‍♀️

turns out there is a sweet spot just around 0.001 that could give neutral standings

im trying to get that now

Still in that sweet spot, but it probably won’t last long.

Is that correct? -0.001 to Edencom is okay? Patch notes say ANY negative standing

I’m still trying to get that sweet spot lol
It’s being a pain.

Can anyone confirm this is possible?

Are you neutral to both ?

There is plenty of lore…

dropped by in game items from the trigs themselves…

really you should go look at the stuff the RP group dealing with Drifters, Trigs, and Rouge drones over the past 2-3 years has been able to piece together.

What about trigs? Are they not shooting you? If they dont shoot, this effectively cancels the change to standing in patch lol. Still possible to get the neutrality towards both.

I wonder if they will leave it as it is at this point.

White to both. Nobody’s shooting me, except the regular belt rats. I doubt this will last though, so don’t get hopes too high.

Some technical limitations, particularly the way standings are programmed may be not allowing it to be the other way tho.

Hmph.
I’ve just checked situation with new rules about standings with Triglavians/EDENCOM, on my second character, on which I never opened fire on these NPCs. I have no standing at all with T/E (so I guess I have real 0.0 with both factions, as I see nothing about T/E in my Interaction -> Standings info panel).

Went to EDENCOM combat site in Nourvukaiken. EDENCOM ships completely ignored my presence. Then I’ve traveled to Kino, and warped to nearest Triglavian combat site. After 10 seconds they extirpated me.

You can draw your own conclusions.

And by the way, it’s really sad to see that Kino is just… empty, no players there at all. All those stacked combat sites and anomalies. Yeah, I guess it’s now a living space for pro-Triglavians players, but apparently they are not interested in earning ISK and exploring anomalies in conquered systems, as they are all busy fighting in every stellar recon systems, to have more, more and MORE Triglavian systems in high sec. It doesn’t matter that most of them will be abandoned and without newbros/casuals/beginners corporations activity, as we used to see in high sec. 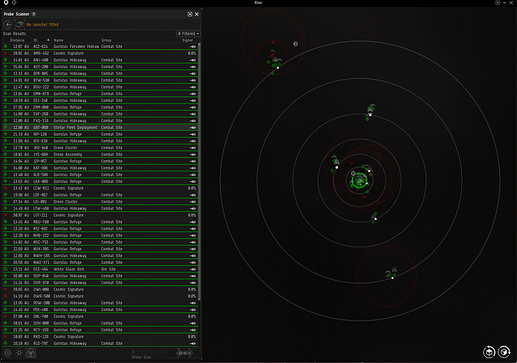 Not many people go there because of how dangerous it is now. Werposts and low sec status makes it very bad for alpha explorers who just started and even didnt shoot any side. Even when you are pro trig, you would have to think twice, because no CONCORD, and any pro trig pirate can kill you. Simple really.

The sites spawn the same like in normal high sec, that is safe everywhere else outside the invasion systems. Sometimes experienced pro trig explorer might come and run a bunch of sites, but rarely.

There were parties that weren’t involved and far enough from the conflict to stay that way. But not truly neutral.

Yeah, Switzerland is continents away from where WW2 raged… and Sweden and Ireland as well, or Turkey

The sites get run regularly, just not 24/7 as in other systems.

They were neutral in an official sense, but the reality is that they were all involved in the war or at the very least affected by it. The neutrality that @Tintallei_Sharan is talking about is being ignored by both sides, which didn’t happen at all for countries you listed.

Shhh, he’s on a roll

They were neutral in an official sense, but the reality is that they were all involved in the war or at the very least affected by it. The neutrality that @Tintallei_Sharan is talking about is being ignored by both sides, which didn’t happen at all for countries you listed.

Well, yes and no.

They were affected by it, yes, but not by direct military actions. So the argument of a “realistic neutrality” is a double edged sword: On one hand, not being affected at all would not be realistic, that’s true. On the other hand, the way neutrals are currently impacted is not realistic either.

And lets remember, the Trig invasion isn’t a world war of politics where you get to make deals with both sides. It’s an invasion.

So yeah. I prefer my ‘Friend or Food?’ comparison.